Edit: This article has been updated to 2015. Please see the latest version of the article here.

Today I'm going to tackle the question that's on all Redditor's minds: How do I get a highly-upvoted post on Reddit?

I won't bother covering the basics of making a successful post on Reddit because there are at least a dozen other articles out there that already covering that. Instead, I'm going to walk you through my analysis of over 850,000 top posts from the past year on Reddit from 4,200 of the most active subreddits.

I bolded the big takeaway messages if you're not feeling like a long read. Give these tips a try for a week or two and report back how well they worked for you in the comments.

It turns out one of the biggest factors affecting the success of your post is the day and time you submit it. In the top graph (below), the shaded area gives an indication of the number of upvotes I am confident a successful post will receive given that it is posted at a given day and time. Similarly, the bottom graph shows the total number of posts that will receive more than 100 upvotes given the day and time they are posted. 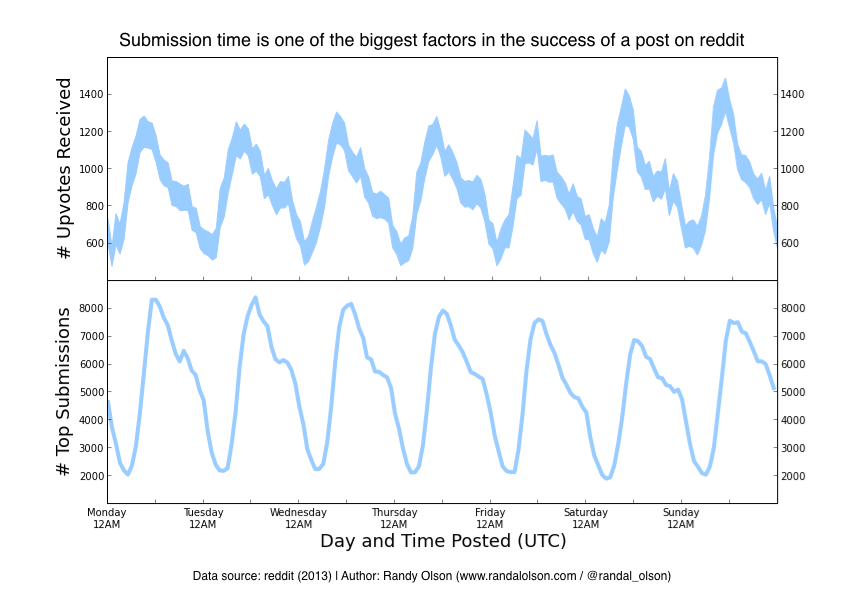 Here's a handy time zone conversion chart so you can convert the UTC time to your local time: http://www.onlineconversion.com/timezone.php

Every day around 12 PM to 1 PM UTC (7 AM to 8 AM EST), there is a highly significant spike in both the number of successful posts and the total number of upvotes those successful posts receive. Undoubtedly, this trend is due to office workers in the U.S. coming into work and catching up on Reddit before they start their workday. The key to success here seems to be to (1) post early in the morning before the deluge of new posts comes in and (2) take advantage of your post's head start and get upvoted out of the /r/new queue before everyone else. If you've posted around 12 to 1 PM UTC and your post escapes the /r/new queue, then your post is in prime position to be viewed and upvoted by the U.S. workforce coming in to work in the next few hours.

Here's what I find amusing in this graph: the number of successful posts peaks on Mondays and then gradually declines over the week, showing that Redditors likely spend more time on Reddit early on in the week when they're suffering from a bad case of the Mondays. (And Tuesdays... and maybe even Wednesdays.)

Great, so now you know when to submit your post, but... what kind of content should you post? First off, let me get this one out of the way: Reddit is married to imgur.com as an image hosting service. 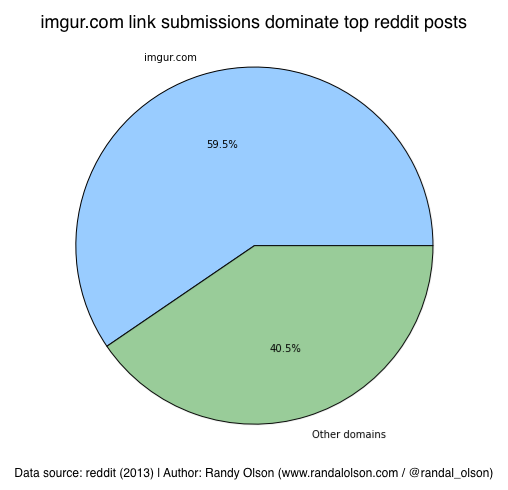 If you're submitting an image post, upload your image to imgur.com and submit that link. Nearly 60% of the top posts from the past year were some form of image or GIF hosted on imgur.com. With that out of the way, let's move on to the next-most-popular content format. 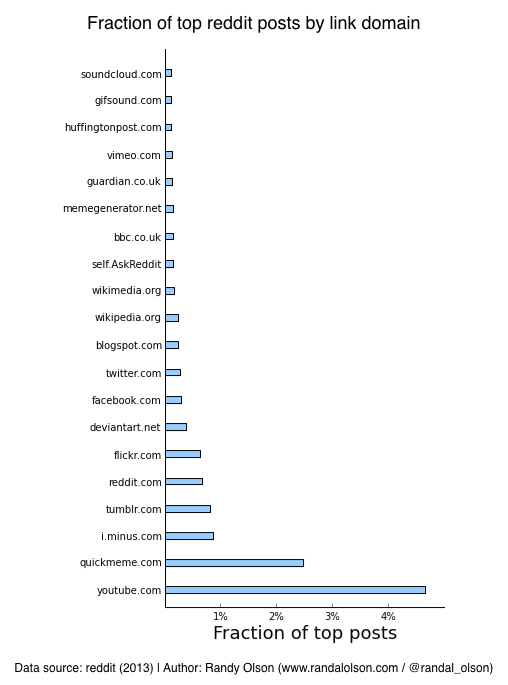 If it's not images that you're looking on the top posts page, then it's most likely a YouTube video. Reddit is dominated by image and video content nowadays. In fact, if you look at just the data presented here, at least 2/3 of the top content on Reddit is an image or video. As such, if you have some sort of message you want to share with Reddit, you're best off trying to communicate it through an image or video.

quickmeme.com appears to be Reddit's favorite meme generating website, whereas blogspot.com seems to be the most popular blogging service. What I find surprising is that Facebook and Twitter links appear to be shared equally, even though many subreddits have implemented rules against sharing direct Facebook links. Meanwhile, the Wikimedia/pedia services are Reddit's go-to web sites for free educational content, showing just how much Redditors rely on wikis for their information. Lastly, Reddit's top news posts most often come from BBC, The Guardian, and The Huffington Post. When it comes to news sources on Reddit, it looks like the UK has the U.S. trumped! 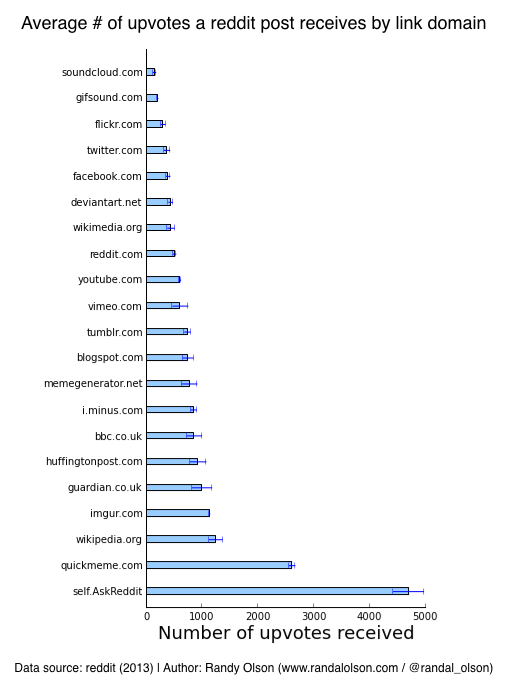 If it's upvotes you're after, then I have a different story for you. Whereas imgur.com links are by far the most likely to rise to the top, successful /r/AskReddit self-text posts and meme posts are significantly more likely to receive more upvotes. It's undeniable that Reddit loves sharing stories and jokes via /r/AskReddit, and the patrons of /r/AdviceAnimals freely hand out upvotes to any meme that makes them so much as chuckle. Keep this in mind if you're more concerned about upvotes than getting your message out there.

Note: quickmeme.com has recently been banned from reddit entirely for vote manipulation, and imgur.com was quick to make a meme generator service to fill the void.

The final thing I'll note here is that imgur.com ranks 1st in terms of likeliness to reach the top page, and 4th in terms of upvotes. If you're following along, that means your best bet of reaching the top page and reaping sweet, abundant karma is to submit an imgur.com link early in the morning on the weekend. 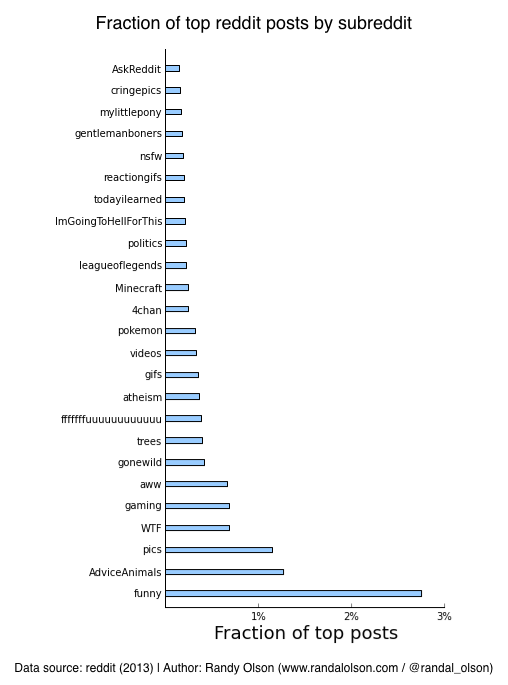 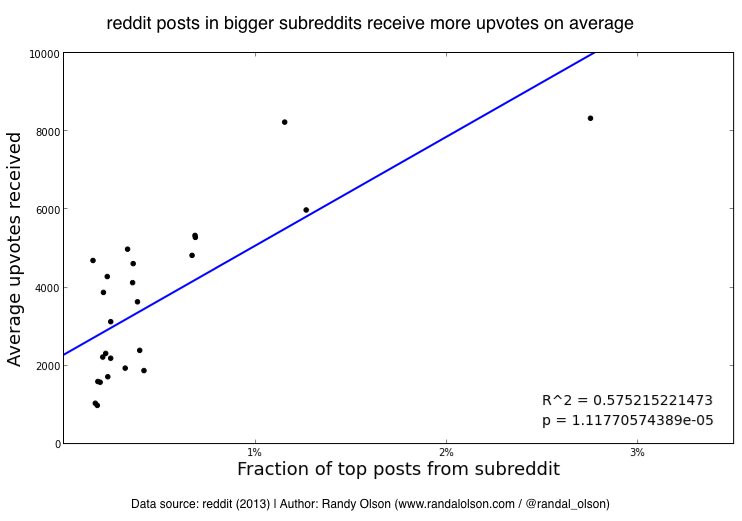 However, again if it's karma you're after, I have a very important addendum: the fraction of top posts that come from a subreddit is highly predictive of the number of upvotes your post will receive if it's successful. Successful posts in /r/funny, /r/AdviceAnimals, and /r/pics by far receive the most upvotes on average. So keep that in mind: the higher you go on the "Fraction of top posts" chart (i.e., smaller fractions), the fewer upvotes your post will potentially receive. The good news is that smaller subreddits have fewer people posting to them, so even though you receive fewer upvotes, your post is far more likely to show up on the front page of anyone subscribed to that subreddit.

(For you stats nerds out there: I also fit this model with all 4,200 subreddits and the relationship is still significantly predictive, even if I remove the extreme outliers on the right of the graph.)

What title to use

Now for the last of the five W's: Why? (If you didn't catch it, the first W was "Who?" The answer to that one is you!) Why should someone bother clicking on your post, read it, and upvote it? That's the purpose of your post's title. Below is a word cloud of the most-used words in the top posts on Reddit. The larger the word is, the more often it was used. 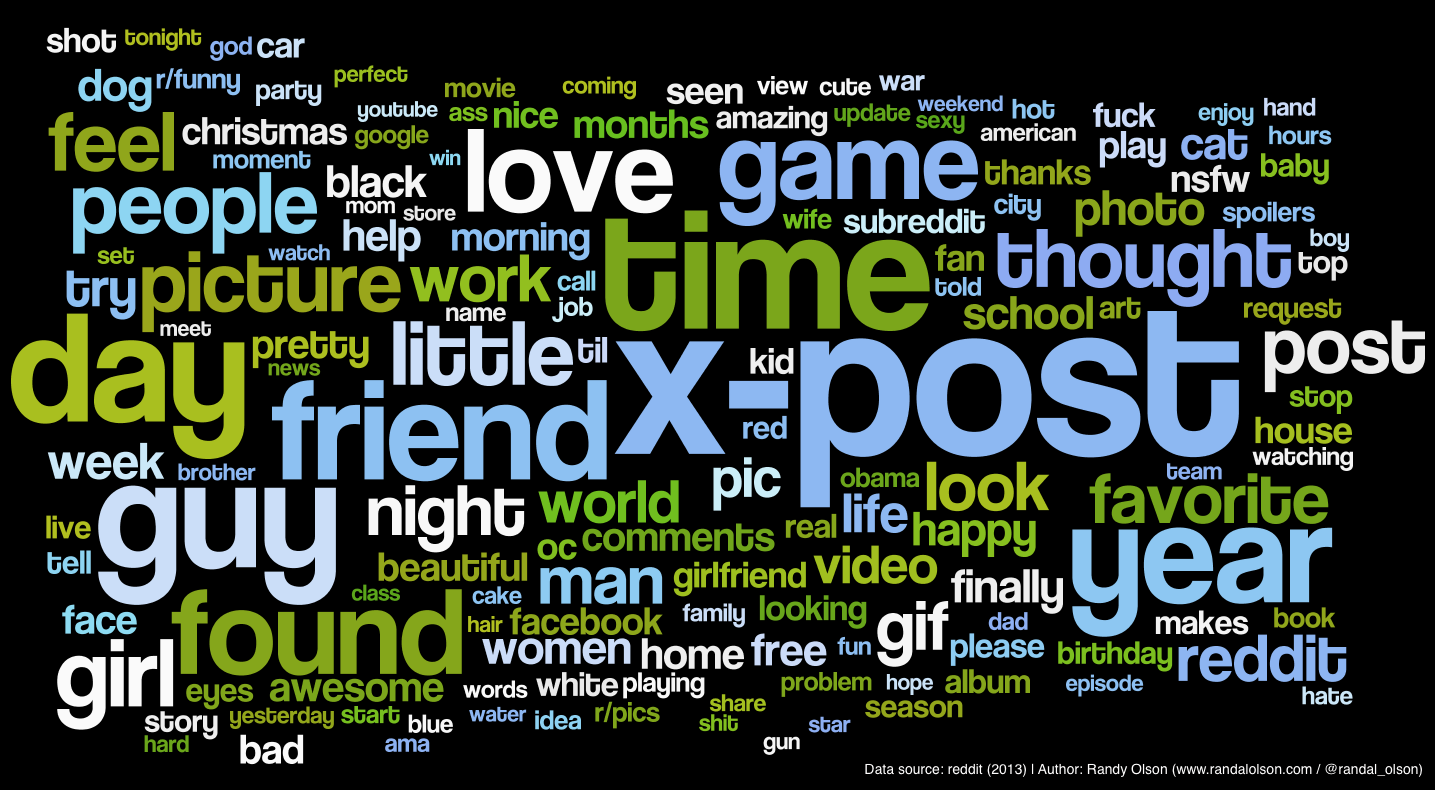 I'm going to take 40 or so of the most-used words, break them down into categories, then give you some example titles that the words were used in. Please take these example titles as just that: examples. Use them as inspiration to create your own post titles.

"x-post" is the most-used word in the top posts from last year, and if you're familiar with Reddit, this should not be a surprise. Cross-posting is huge on Reddit, especially when there are many subreddits with similar interests. Generally, cross-posted links do better because they're already well-liked in another subreddit before they were cross-posted, and thus were vetted for the poster beforehand. A word of warning: be careful with cross-posting to excess. Reddit can get pissed off pretty quickly if you share a link too much.

Props to the photographer [x-post from r/owls]

Some mention of time is commonplace in top Reddit posts. These words seem to be used to make the post relevant to current or past events, and thus make for a more interesting post title.

By the time they reached the front of the line the baby had fallen asleep. Thankfully Santa played along!

I've been playing the same game of Civilization II for almost 10 years. This is the result.

Cable Industry Finally Admits That Data Caps Have Nothing To Do With Congestion: 'The reality is that data caps are all about increasing revenue for broadband providers -- in a market that is already quite profitable.'

So I saw this guy the other day...

Mentions of other, non-specific people seem to be extremely common among the top posts. Reddit apparently likes to gossip and share stories about other people.

My friend is a college professor

Male bus driver uppercuts a girl after she attacks him on his bus.

I have been punished for upgrading my PC. This is why people pirate games.

A group of Delhi women have decided the best way to make sure women are safe is to create a special cab service just for them. Women drive the cabs and only pick up women passengers.

Reddit isn't just all cat lovers any more: cats and dogs are mentioned equally in the top posts from the past year. It's easy to relate to other people through likable animals like cats and dogs, especially when you're sharing a cute picture of them.

Dog teaches puppy to use the stairs.

This is why it takes me so long to finish a game.

Talk about what you're posting

As I mentioned before, images and videos is the primary content on Reddit. It turns out it helps if you talk about the image or video you're posting.

My local humane society posts pictures of new adoptions. This one makes me so happy.

When I see a funny post with only a few upvotes

So I have combined these two gifs. The story is now complete.

I meticulously tabbed this video of 100 guitar riffs. Press Play and enjoy.

Photo I took of the Chicago skyline from a beach in Indiana.

Have a broader perspective

People come on Reddit to escape their daily life and learn something about the world. If you can fill that need for them, they will upvote you for it.

If you're really passionate about what you're posting, let it shine through! Redditors love it when a post title shows emotion.

A young Steve Irwin gets bitten by a snake on television. I love the classy and calm manner in which he responds.

As someone who is fairly new this is how I feel about my budding Reddit addiction...

I don't care how many times people have posted this. It's still my favorite thing on the Internet.

Came out of the restaurant and saw this. It made me happy.

This guy is a reporter on Fox 2 here in Detroit. His name is Charlie LeDuff. He is fucking awesome.

Walked in on my little cousins...

Reddit is big on self-referential jokes. If you can get in on those, you're golden!

If it's relevant, mention a location related to your post. It helps give context to what Redditors are looking at. Amusingly, "work," "school," and "home" are the most-used words related to location.

Oktoberfest: Redditor from Munich here! This is my walk to work in the morning...

Guy at my school attempting to release a mouse into the wild.

Walking home last night in Brighton and turned the corner to see this tribute to MCA by graffiti artist 'Aroe'. It's unbelievable. 12ft by SIXTY FOUR FT!

That's all, folks! Don't wait for chance to favor you; make chance favor you.