In his seminal work in 1907, Vox Populi (The Wisdom of the Crowds), Sir Francis Galton looked at the results of a weight-judging competition where participants had to guess the weight of an ox for a monetary prize. As would be expected, there were a wide range of guesses, some of which were wildly inaccurate. Much to his surprise, however, when he pooled the guesses of all 787 participants together, the crowd guessed the ox's weight nearly perfectly. 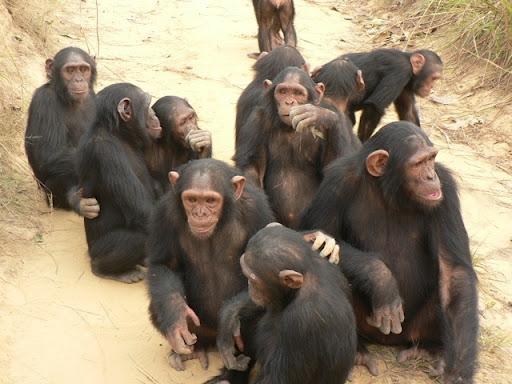 We know that animals make better decisions in a group than by themselves, but we're still trying to find out why.[/caption]

In their paper, Accurate decisions in an uncertain world: collective cognition increases true positives while decreasing false positives, the authors explain that groups can harness each members' unique perspective on a problem by following a specific decision-making process. First, the group members must examine the problem themselves and secretly vote "yes" or "no." (In the paper, "yes" or "no" indicates whether they saw a predator in a picture.) Next, the group members must pool their votes and vote for a second and final time, but this time they vote "yes" only if a sufficient fraction of group members also voted yes, called the quorum threshold. The result of this decision-making process is shown in the figure below. 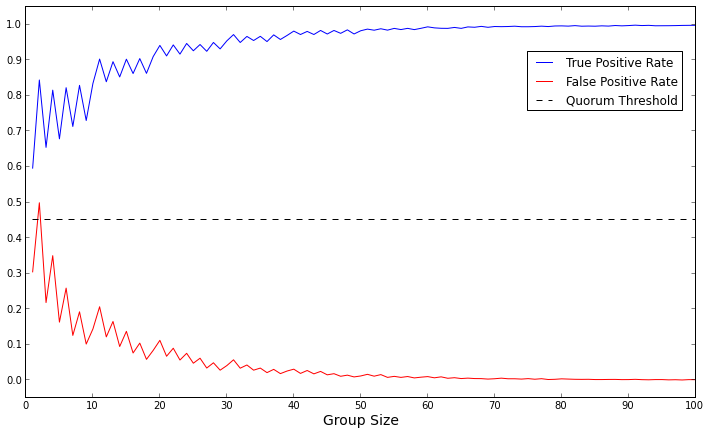 In this model, each group member by themselves votes "yes" correctly 60% of the time (true positive) and votes "yes" incorrectly 30% of the time (false positive). This means that, by themselves, each group member will perform pretty poorly. However, when they follow the decision-making process described above, a group with 65 members can improve their accuracy to nearly 100%! How's that for the wisdom of the crowds?

Since the authors didn't include the code with their paper, I hacked together a quick version of the model and put it up on Github. Feel free to copy and reuse it as you like.

Now, you may be wondering: "How the heck does that work?" How do otherwise mediocre decision makers make near-perfect decisions when they work together? Unfortunately, the authors don't go into detail on the why of this decision-making process, which no doubt means that will be the focus of future work.

Models are great, but what about the real world?

What the authors did next is what really made this study impressive. Knowing that their model predicts the optimal quorum threshold value to fall between a group's true positive and false positive rate, they conducted an experiment with humans to see if this prediction holds up in the real world. Sure enough, shown in the figure below, each group's quorum threshold (labeled "escape quorum") fell in between the group's true positive and false positive rate. 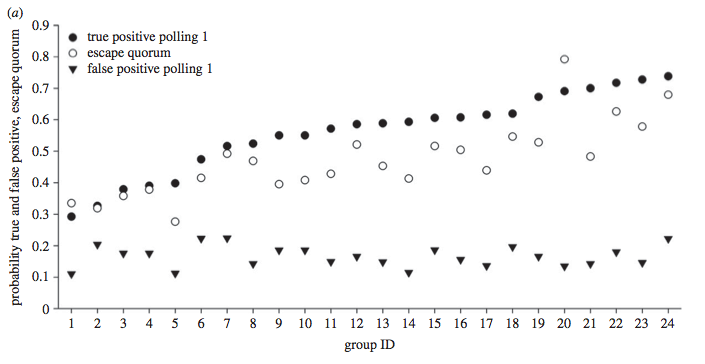 So, what does this mean for me?

All this theory and experimental findings are neat, but what does this mean for businesses, engineers, and the public at large? As it turns out, we all have to make important "yes" or "no" decisions every day. I'll highlight a couple examples from the paper, then add a couple examples of my own. Feel free to add your own examples in the comments.

When a doctor examines a patient, they have to decide whether or not the patient has a disease or other ailment. Correctly diagnosing diseases (true positive) while avoiding identifying healthy patients as sick (false positive) is a vital part of a doctor's job. As such, doctors can make better decisions by independently diagnosing a patient, then pooling their diagnoses together to make a final diagnosis.

Hiring a new employee can be an expensive and time-consuming process, so it's important to choose the best employee for the position. Search committees can best assess their applicants by assessing each applicant individually before discussing the applicants as a group.

When analyzing the blueprints for a building, it is vital for engineers to accurately identify any potential structural faults in the building plans. Thus, design firms are better off having multiple engineers analyze the blueprints independently before holding a meeting to discuss any faults in the plans. Further, it is likely that numerous less-experienced engineers will identify more faults than a single experienced engineer.

I don't know if the reddit designers intended to capitalize on the "wisdom of the crowds" with the reddit model, but there's no denying that they owe their success to it. reddit delivers the most interesting content on the internet because thousands of people are voting on each link, which no doubt leads to an incredibly accurate decision of whether each link is interesting and relevant to the subreddit.

The future of collective intelligence

Decision making lies at the core of nearly every problem we face nowadays. A century after its discovery, there's no doubt that we still have a lot to learn from animal collective intelligence. I hope that we see more research in this field so we can better understand how and why animals work together in groups.