This is the original version of the article that appeared on Co.Design.

We live in an age of Big: Big Computers, Big Data, and Big Lies.

Faced with an unprecedented torrent of information, data scientists have turned to the visual arts to make sense of big data. The result of this unlikely marriage -- often called "data visualizations" or "infographics" -- have repeatedly provided us with new and insightful perspectives on the world around us.

However, time and time again we have seen that data visualizations can easily be manipulated to lie. By misrepresenting, altering, or faking the data they visualize, data scientists can twist public opinion to their benefit and even profit at our expense.

Due to our natural tendency to trust images more than text, we’re more likely than ever to be fooled by data visualizations. Fortunately, there are 3 easy steps we can follow to save ourselves from getting duped in the data deluge. 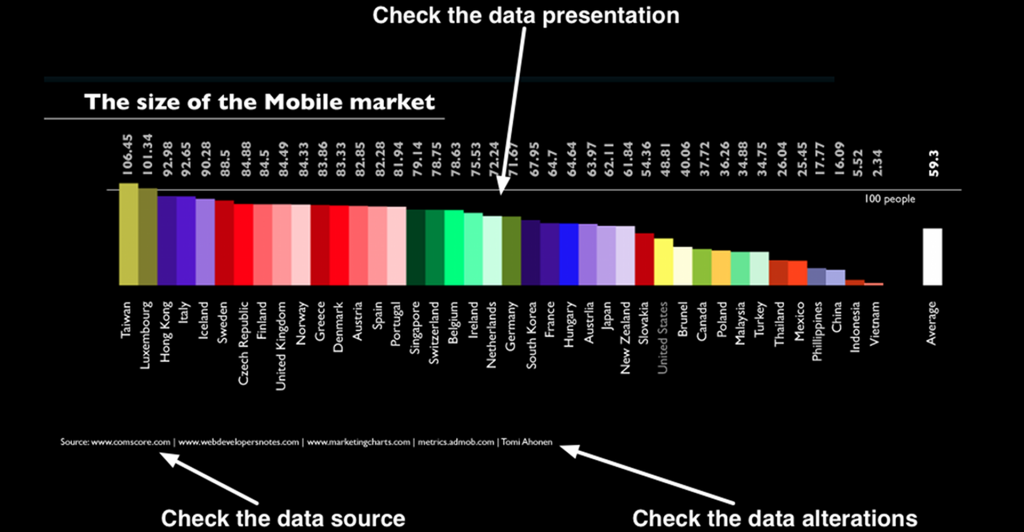 Not all data are created equal. Here's how to sort out the good data from the bad.

Make sure the data source is reliable

Data collected by an amateur is more error-prone than data collected by a professional scientist. Do a quick web search to see if the people who collected and organized the data have a good track record of collecting and distributing data.

A drug company may be inclined to present fake data showing that their latest drug is more effective than it really is, or a political organization may manipulate data to discredit their political opponents. Think twice when considering data provided by biased groups.

Generally, we can trust data provided by:

And we should look more closely at data provided by:

If the data source isn't listed, take the data visualization with many grains of salt.

All data sets require a little bit of house cleaning before they can be visualized, but excessive curation can be a sign of misrepresented data.

Ensure that the explanations for excluding that data are reasonable. Sometimes the "explanation" may be that the data inconveniently contrasted with the story the author wanted to tell.

Statistics are an often-abused tool in data science. "Fatal shark attacks have risen 100% this year" sounds like an alarming statistic until you realize that only 1 person was fatally attacked by a shark last year. Check the raw numbers when data visualizations present only the statistics.

Comparing statistics is even trickier. If a survey shows that 50% of Latinos and only 30% of Caucasians enjoy watching baseball, those results could easily have been purely due to chance because the survey only interviewed 20 people of each ethnicity. If the visualization doesn't indicate their confidence in the comparison (called statistical significance), then we shouldn't be confident in their comparison.

If the details on the data alterations aren't provided with the visualization, always keep in mind how easy it is to make data lie when it's visualized.

The subtlest way a data visualization can fool you is by using visual cues to make data stand out that normally wouldn't. Be on the lookout for these visual tricks.

Color is one popular tool for making certain data stand out above the rest. When considering the map below, Kentucky and Utah (the darkest and the lightest) will most likely stand out to us first. 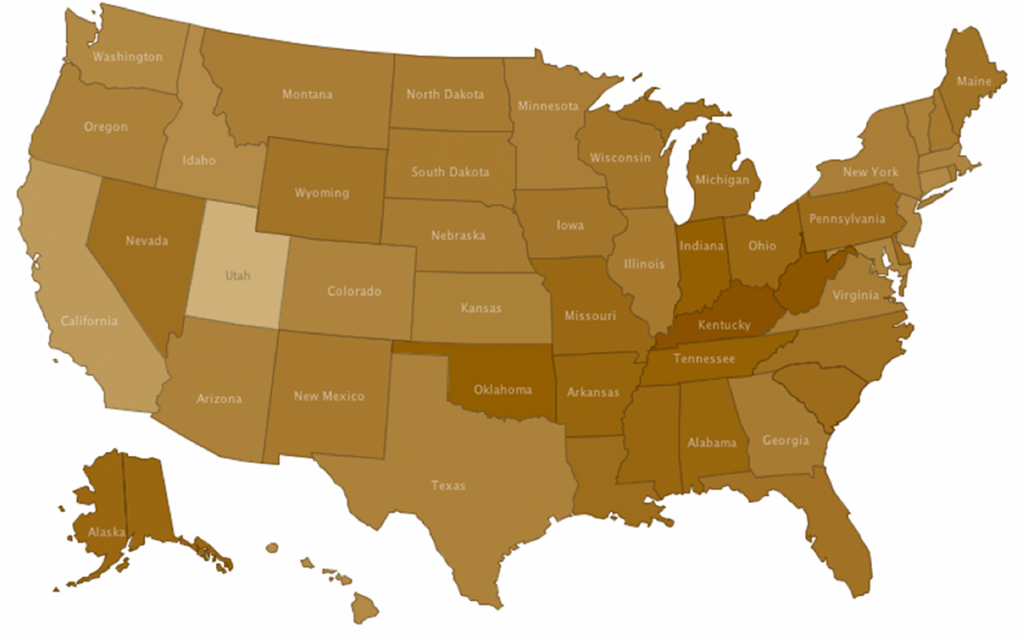 If this map were showing percentage of the population that smokes (dark = more, light = fewer), we may quickly conclude that Kentucky has a serious smoking problem. But what if we looked at the raw numbers and saw that 27% of Kentuckians and 23% of Utahans smoke? Not so big of a difference after all.

Make sure to look at what the colors actually represent before drawing a conclusion from the visualization.

Structure is another popular tool for making data immediately stand out. In the bar charts below, we're looking at the same data but with different y-axis ranges. Notice how such a simple structural change can make data look much more significant.

Is an increase of 15 fraudulent visualizations from last year really "skyrocketing"? Don't let the structure of the visualization decide that for you.

Always check the numbers that the visualization is representing.

Remember: To save yourself from getting tricked by deceitful data, check the data source, alterations, and presentation.