A look at sex, drugs, violence, and cursing in film over time through MPAA ratings

In 1968, the Motion Picture Association of America (MPAA) film rating system took effect in an effort to replace the then-aged Hays Code. The goal of the MPAA rating system is to provide a modern, standardized scale on which to rate the suitability of films for certain audiences in the U.S.A. and its territories. As such, the MPAA rating system judges every film and assigns them to one of five categories:

These categories have changed a little over the years, but these are the ratings as we know them now. Although the MPAA film rating system is voluntary, films aren't allowed to be shown in most theaters nowadays without a MPAA rating. Therefore, MPAA ratings provide a useful snapshot of how major films in the U.S.A. have changed over the years.

Starting in late 1990, the MPAA started including reasons for the ratings they assigned, including "sexual content", "drug use", "violence", and "strong language". I tallied these reasons for every year and ratings category and plotted them below. These tallies provide an interesting view of sex, drugs, violence, and cursing in film over time from 1990 through 2013. 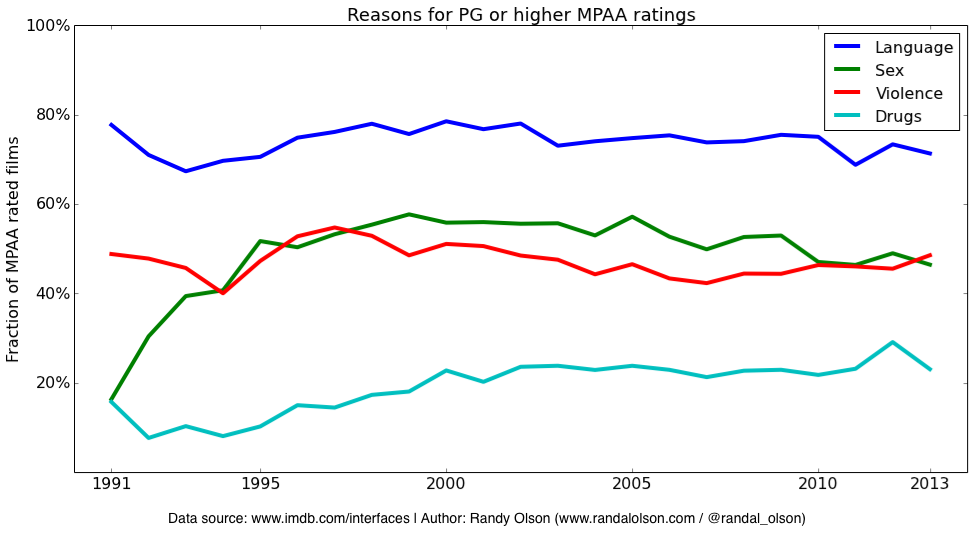 The shocker here is that by 2013, 5 out of every 10 big screen films with a PG rating or higher has some form of sex and/or violence in it, and 8 out of every 10 films have some form of cursing. I've become so desensitized to sex, violence, and cursing in films that I barely even realize it, but even mainstream comedies like 21 Jump Street (2012) are rated R for sex, drugs, violence, and cursing! Wow!

The sharp increase of sex in 1990s films was no surprise for me: One of the biggest changes I remember in 1990s films was the sudden burst of sex scenes in every popular film. Even in films where it didn't make sense for there to be a sex scene, suddenly I'd see the hero and heroine going at it like monkeys for several minutes while I awkwardly shifted in my seat next to my parents. 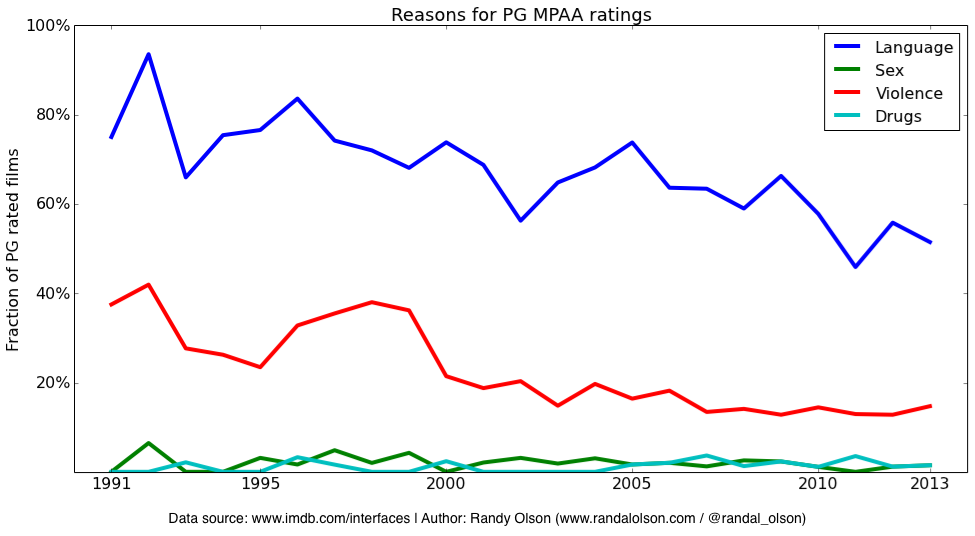 This is one of the most comforting graphs that came out of this project because it shows us that at least PG rated films -- which most kids and teenagers are able to watch nowadays -- don't have drugs nor sex in them (for the most part). Another trend we see over time is that violence and cursing are slowly going down in PG films, which should make us feel a little more confident in letting our kids watch newer PG rated films.

This graph is also one of the funniest graphs from this project because it shows how strange U.S. culture is about sex, drugs, and violence. Especially in the 1990s, if there was violence or cursing in a film, it was usually okay for kids to watch. But if there's any hint of sex or drugs in the film? No way, Jose! We can't expose our kids to that! 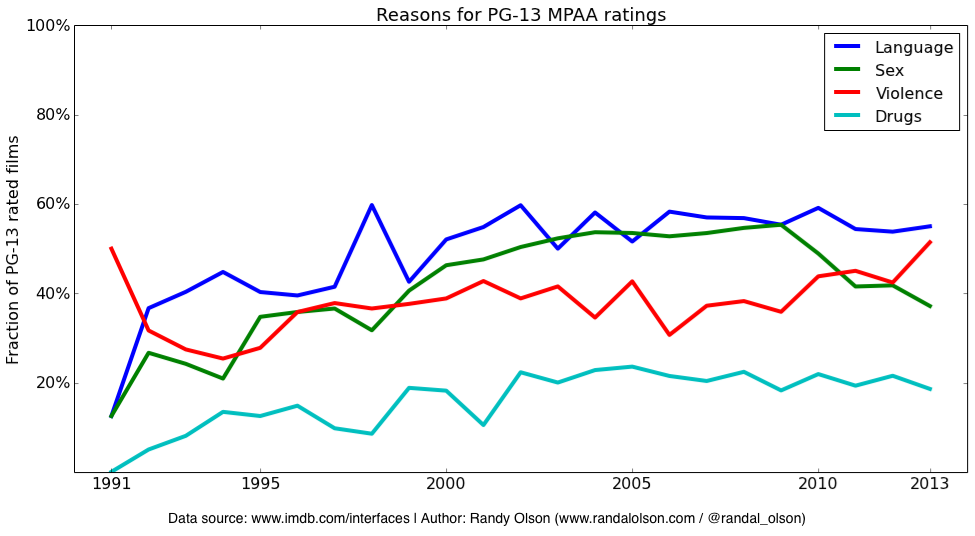 The PG-13 ratings reasons seem to be a wash. Other than the trend of increasing drug usage in PG-13 films, there isn't much to see here trend-wise. 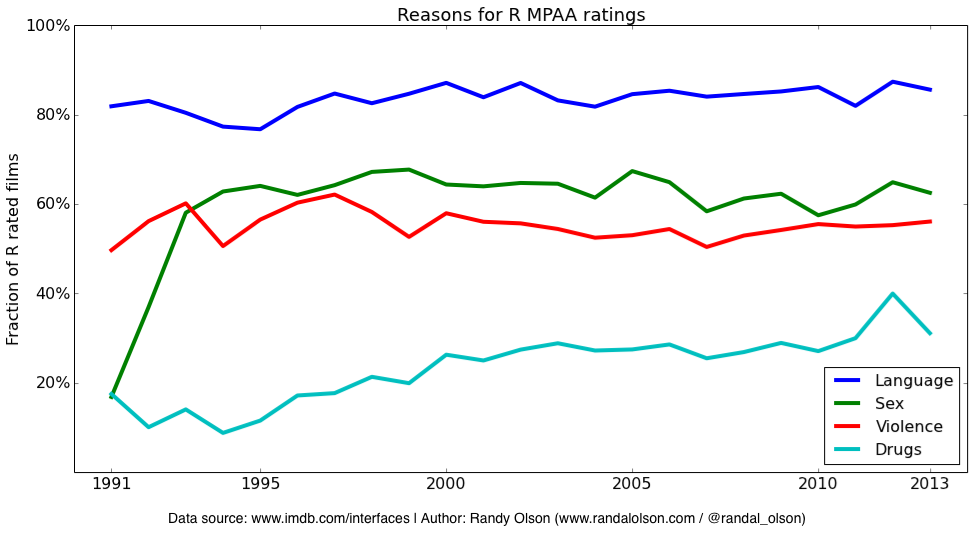 Here's where things get interesting again.

We can tell that the biggest rise of sex-related scenes in the 1990s happened in R-rated films. Although it's always difficult to attribute causation to a correlation, it seems pretty curious that less than a year after the MPAA started including reasons for their ratings, R-rated films with sex scenes suddenly spiked. Could it be that directors started cramming sex scenes into their films in the 1990s to get an R rating so their films would be more appealing to adults? As they say: Sex Sells, and what's a better way to advertise that there's sex in your film without being obvious about it?

We're starting to see a similar trend with drug usage in films, too. Now that drug usage is becoming ever more hip, more and more films every year are including drugs in an attempt to connect with moviegoers. How long will it be until it becomes commonplace for every R-rated, adult film to have sex, drugs, violence, and cursing?

I parsed through the IMDB "MPAA ratings reasons" list and looked for the phrases "sex", "drug", "violence", or "language". This of course misses a few films where they didn't mention any of those words in the ratings reasons -- Braveheart being the most notable example that I noticed -- but it still captures most of the 12,000+ film's ratings correctly.

I excluded NC-17 in these graphs because there were so few films (< 4 per year) that were rated NC-17. What's that say about the commercial viability of the NC-17 rating, eh?