Movies aren't actually much longer than they used to be

Every year, I hear the same complaint about movies on the big screen: Movies are getting so damn long! We're almost to the point that moviegoers should start demanding an intermission for some of these behemoths of film.

Epics like The Hobbit: The Desolation of Smaug are pushing the boundaries of how long a film can be[/caption]

But then I started wondering: Are movies really getting longer than they used to be? Or are a few outliers--like The Lord of the Rings series--skewing our perception of what's really going on? To address this question, I turned to IMDB and gathered the 25 most popular movies from each year from 1931 through 2013. Below is the average feature film length over that time period. 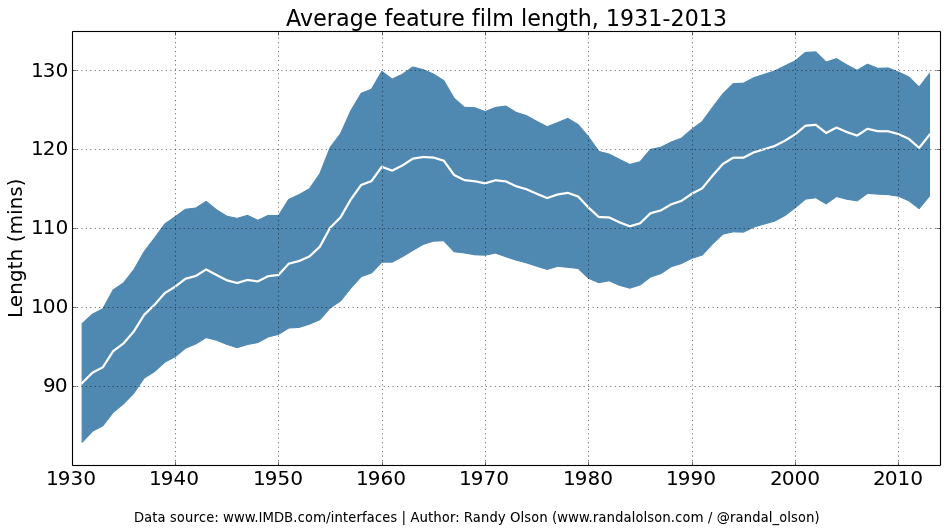 How about that? There's several interesting stages in this data, so I'll break the analysis down by stage.

With the introduction of the television in the 1930s and 1940s, the movie industry suddenly had a competitor. In response, movie producers were forced to raise the bar and start producing more epic films to keep audiences packing the theater. The result? Feature films gained an extra 30 minutes between 1931 and 1960, which set the standard in film for the next 50 years, and eventually led to the blockbuster phenomenon.

It's strange that the average feature film lost about 10 minutes during this period. The only explanation I can think of is the videotape format war in the 1970s, where VHS and Betamax were battling it out to become the dominant movie format. Could the eventual dominance of VHS caused movie producers to keep their films shorter and well under the 2 hour mark?

Between 1985-2000, feature films grew back to the same length as in the 1960s. This may explain why it's usually Millennials (born 1980-2000) complaining that movies have gotten longer than they used to be: If you grew up watching movies in the 1980s, they have gotten longer for you! Meanwhile, Generation Xers are shaking their head at Millennials wondering what the heck they're talking about (as usual).

Perhaps the most relevant time period for us to look at is 2000-2013, because these are the movies that are the freshest in our mind. Interestingly, the average feature film hasn't gotten much longer since the turn of the century, keeping with the status quo established in 1960. This is just averages over a bunch of movies, though. What if we compare the longest feature film each year? Surely modern movies are longer than the old ones that had to fit on a VHS tape. 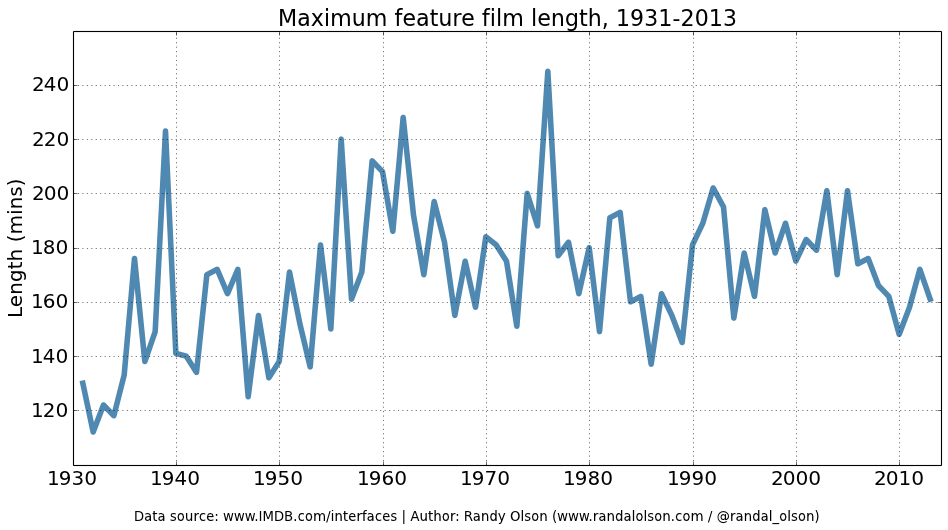 Length of the longest feature film each year[/caption]

Huh. Even the maximum feature film length has hovered around 3 hours since the 1960s. It looks like movies aren't actually much longer than they used to be.

What about looking at all films ever?

Several people commented that only looking at the top 25 most popular films each year could possibly have biased this analysis, so here's the average feature film length for all feature films in the IMDB database between 1906 and 2013. 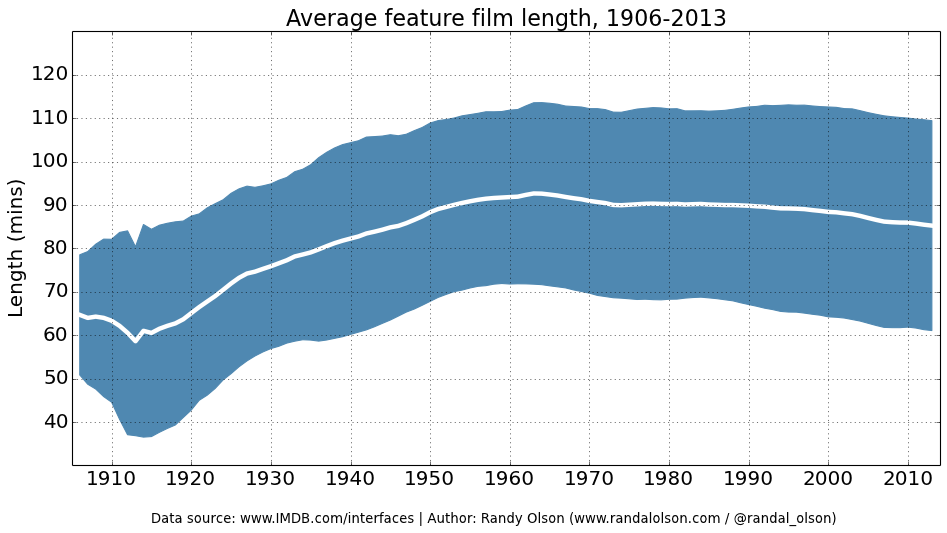 Although the overall average film length is much lower than the top 25's average film length, the same main trends still hold: Up until the 1950s, feature films grew by 15-30 minutes. Then after the 1950s, the average movie hovered around 90 minutes. Interestingly, the trend here shows that movies have been getting a little bit shorter in the past few years. We'll have to revisit this data in a few years to see if that trend holds.

I parsed through the IMDB "running times" list and grouped the films by year. For each year, I saved the 25 films with the most IMDB user ratings to build a list of the most popular films for each year. Number of IMDB user ratings is a reliable measure of a film's popularity because popular films that were highly successful in the box office--and thus had millions of people watching them--generally receive far more user ratings on IMDB than unsuccessful films.