A Song of Ice and Fire by the numbers: Chapter titles

I've been catching up on the "A Song of Ice and Fire" book series lately and ran across an Amazon book review that had an interesting take on reviewing the books. Since each chapter is named after the character it focuses on, we can get a bird's eye view of each book by counting how many chapters are dedicated to each character. Can we learn much about the books from such a high-level view? Let's take a look. 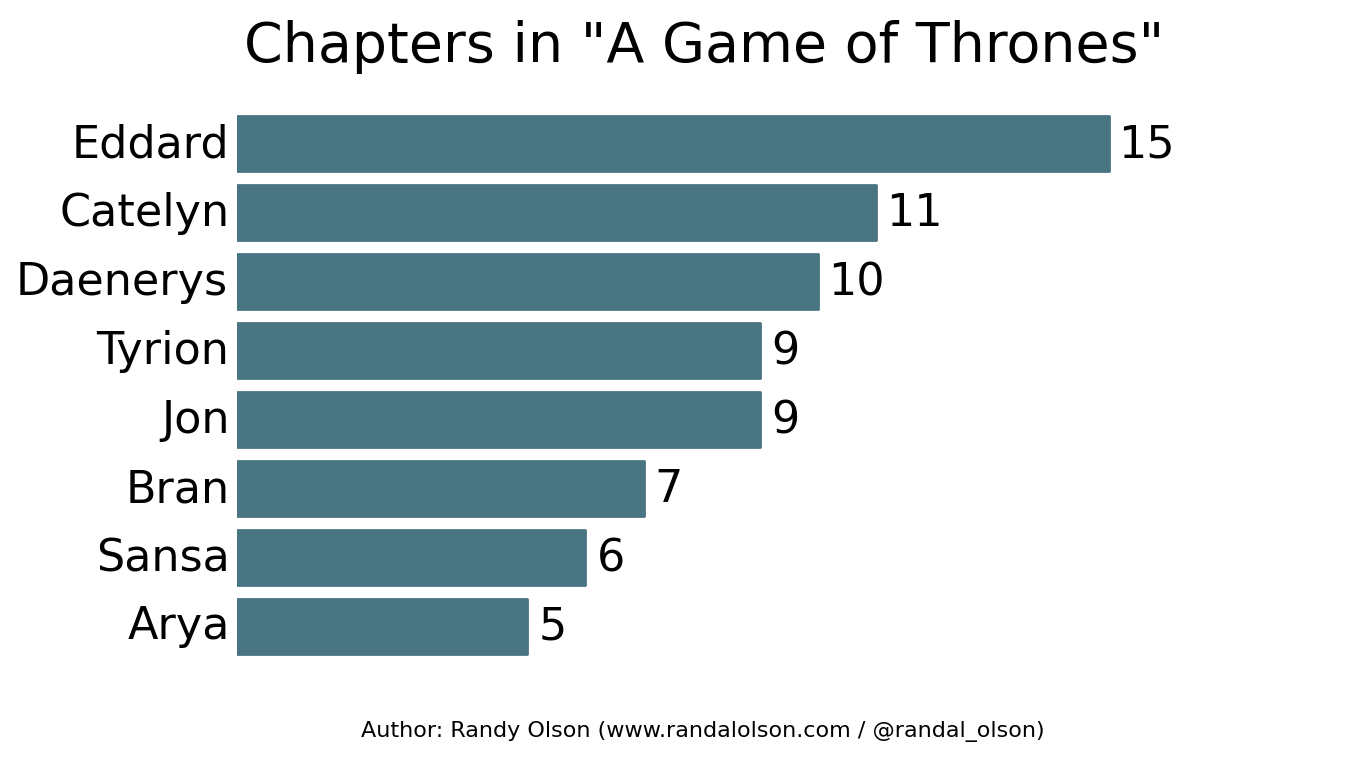 Chapter titles in "A Game of Thrones"[/caption]

The majority of the first book is told from the perspective of the Stark family. In fact, only 25% of the book is told from another family's perspective -- and 10 of those chapters are following Daenerys on an entirely separate continent. Clearly, GRRM focused this first book on developing the Stark family, who would play a huge role in the coming crisis.

Although it looks like Eddard is our manly hero, nearly half of the book is told from the perspective of women. I'm no fantasy series connoisseur, but the diversity of perspective that the book is written from really sells this book series for me. 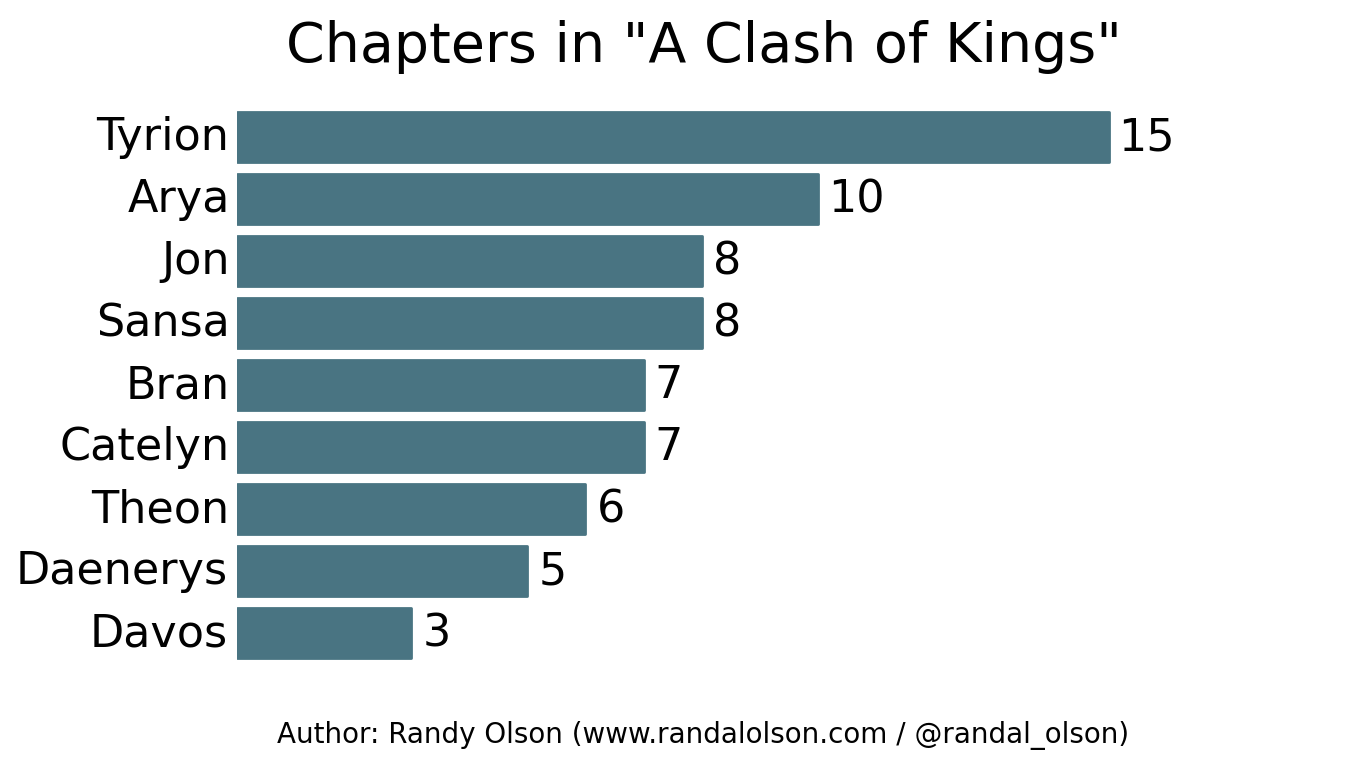 Chapter titles in "A Clash of Kings"[/caption]

Huh. What happened to Eddard? About 75% of the second book is still dedicated to the Stark family's perspective, but Eddard is nowhere to be found. Maybe he's taken a vacation to Volantis?

With the loss of Eddard, Tyrion takes on the role as the dominant perspective in the series. Clearly Tyrion is destined for greatness in this book. Let's just hope he doesn't suddenly go on a vacation like Eddard.

Lastly, we get to see the world from the perspectives of Theon and Davos in the second book, who give us a closer look at the action going on in the Iron Islands and Dragonstone. 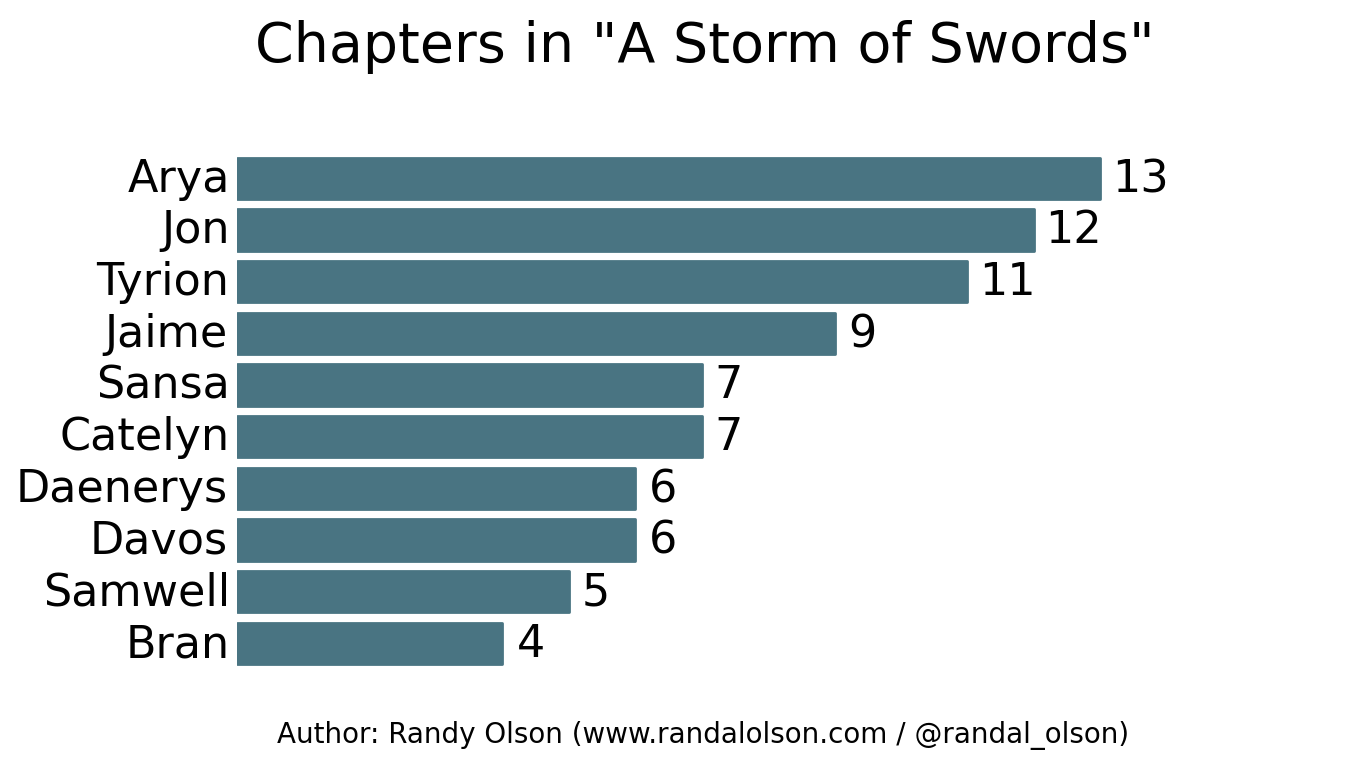 Chapter titles in "A Storm of Swords"[/caption]

Surprisingly, Arya takes the leading perspective in book 3. I wouldn't have expected a little tomboy to become a leading character in this series, but GRRM always has a trick up his sleeve, doesn't he?

For another surprise, Samwell comes into his own in book 3, with 5 chapters dedicated to his perspective. Who would've thought a fat craven would be worth following in the frozen north?

For the first time in the series, we get to see the perspective of someone who isn't a de facto "good guy": Jaime. This was an entirely new perspective for me, as most fantasy novels don't let us see through the eyes of the "bad guy." Another great selling point for the series! (Some may claim Theon fills that role in book 2, but he wasn't a "bad guy" from the beginning.)

Of note: Robb never had a chapter dedicated to him, so it's strange that the TV show spent so much time on him. Perhaps it was to make the events in book 3 all that more tragic. 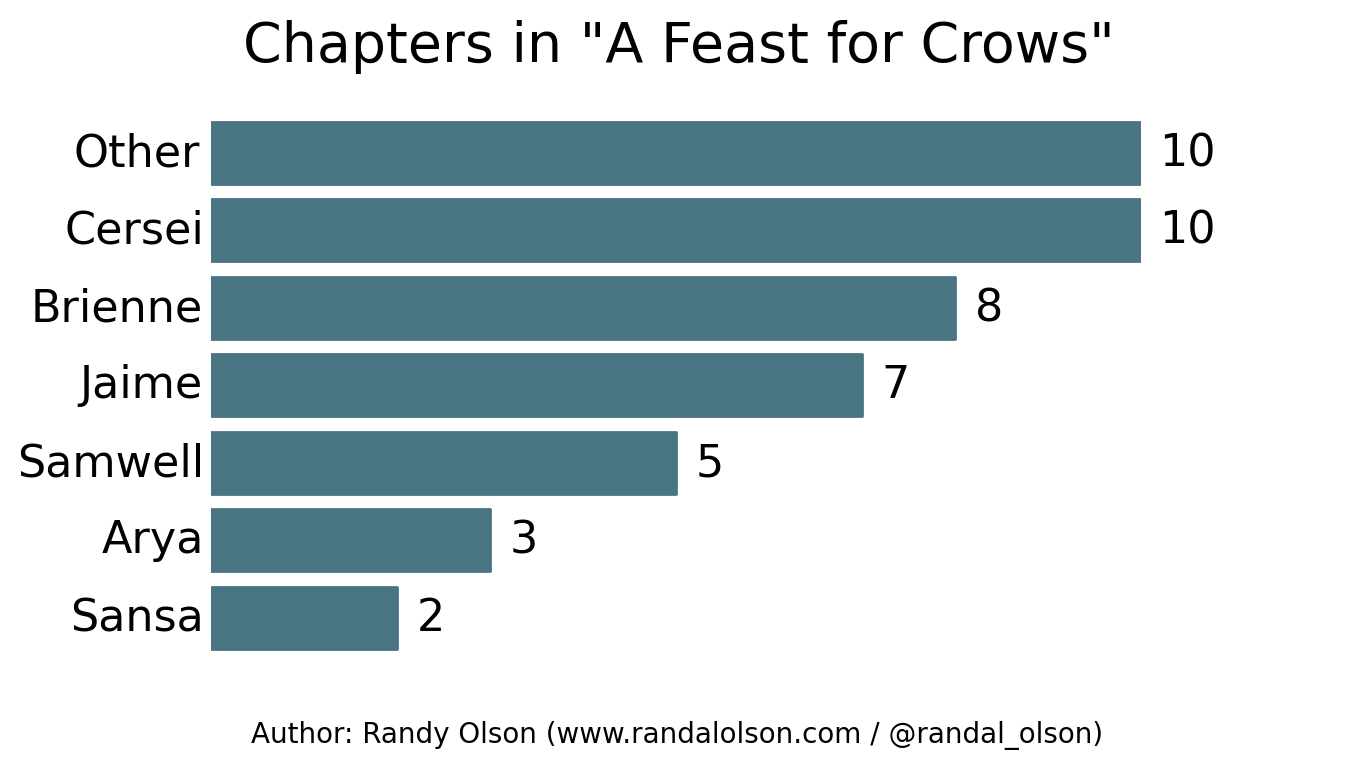 Chapter titles in "A Feast for Crows"[/caption]

Cersei and Brienne burst onto the scene in book 4, two entirely new perspectives that we've never heard from before. This should make book 4 especially interesting to see what's going on in Cersei's mind.

Book 4 is one of the first books that had several miscellaneous characters taking over that we haven't heard of before, and don't ever really see again (the "Other" group). Interestingly, this coincides with a whole star drop in ratings (from 4.5 to 3.5) in the ASOIAF series. I wonder if these random perspectives had something to do with it? Would GRRM have been better off cutting out the randos and focusing more on the main characters?

Daenerys, Jon, and Tyrion are nowhere to be found in book 4. You bastard, GRRM! Did you send them on a vacation to Volantis too? 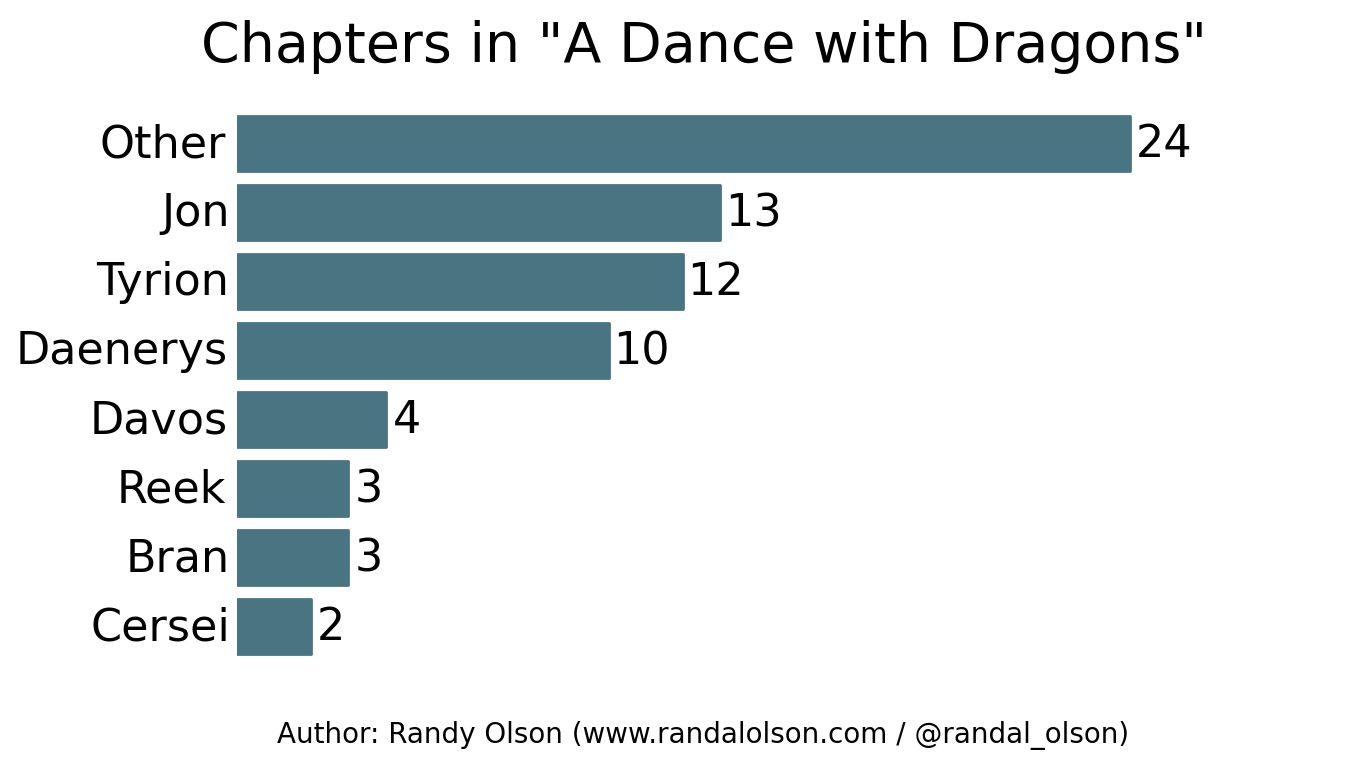 Chapter titles in "A Dance with Dragons"[/caption]

Oh good! Daenerys, Jon, and Tyrion are back. I was worried there for a bit.

Seeing the chapters dedicated to Davos turned out to be a bit of a spoiler for me, given the claim that he's dead in book 4.

GRRM really went out of control with miscellaneous characters in book 5. I've yet to finish this book, but I hope it's not too distracting.

What do you think?

It looks like we can learn quite a bit about the ASOIAF series even from a bird's eye view. What do you think? Did I miss anything? Leave your thoughts in the comments below.