Harnessing Hashtagify.me and social network analysis to maximize your brand's reach on Twitter

According to an August 2013 PEW report, 18% of all internet users use Twitter on a regular basis. That equates to roughly 500 million people signing into Twitter to check the latest tweets, news, and celebrity gossip every day. It's no surprise that brand marketers have taken an interest in connecting to even a small fraction of those 500 million users with the hope of increasing sales and their brand's reputation.

However, like most online social networks, Twitter has proven to be an amorphous entity that even the best social network analysts struggle to understand. How can we make sense of the massive amount of information on Twitter? More importantly, how can we learn from this information to better market our brands on Twitter?

In this guide, we're going to walk through how we can use Hashtagify.me and some basic social network analysis techniques to target a specific community, identify the key hashtags for that community, and then properly use the hashtags in our tweets to maximize our brand's reach on Twitter.

Some brand marketers may be wondering why hashtags are even worthwhile. Hashtags take up limited tweet characters and make the tweet awkward to read. Why not focus on writing a clear yet concise tweet that explains the product and why it's worth considering?

First and foremost, hashtags are the primary method that users connect to each other on Twitter. If we don't use hashtags, the only users that see our tweets are the ones that follow us on Twitter. Any brand marketer who's used Twitter before can testify how difficult it is to build a loyal following on Twitter.

The data about tweet engagement is even more eye opening. Here's a rundown of the relevant points:

This means that if we want to maximize engagement with our tweets, we need to tweet infrequently, be short yet to-the-point, and include 1-2 relevant and popular hashtags in our tweet. That's an awful lot to consider for a 100-character message, isn't it? Fortunately, Hashtagify.me is in the business of making that whole process a breeze.

How to target a community using Hashtagify.me

As a case study, we're going to focus on the Big Ten sports network. The Big Ten is a collection of 12 large U.S. university's sports programs with hundreds of thousands of fans and followers, and thus represents a prime target for marketing any products or services related to sports. As we work through this case study, imagine how these tools can be applied to market your own brand.

To start, we have to identify all of the major hashtags related to the Big Ten network on Twitter. We can start by searching "BigTen" and keeping track of all the other hashtags people use to refer to the Big Ten. After that, we can do the same search process for the names of the universities in the Big Ten and their sports teams. Conveniently, Hashtagify.me provides us with a network visualization of the most related hashtags, so it takes less than 15 minutes to click around through all the hashtags to catch all of the variants on the team names. 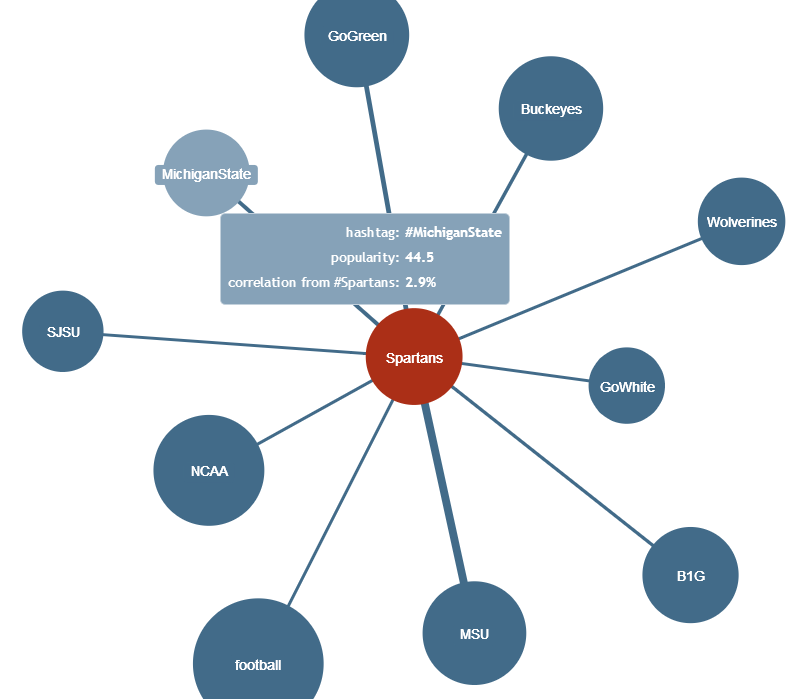 Shown above, Hashtagify.me also provides a measure of each hashtag's popularity, in other words, how frequently the hashtag is used in relation to all other hashtags. We can also record that popularity measure for each Big Ten-related hashtag and rank the hashtags according to popularity. 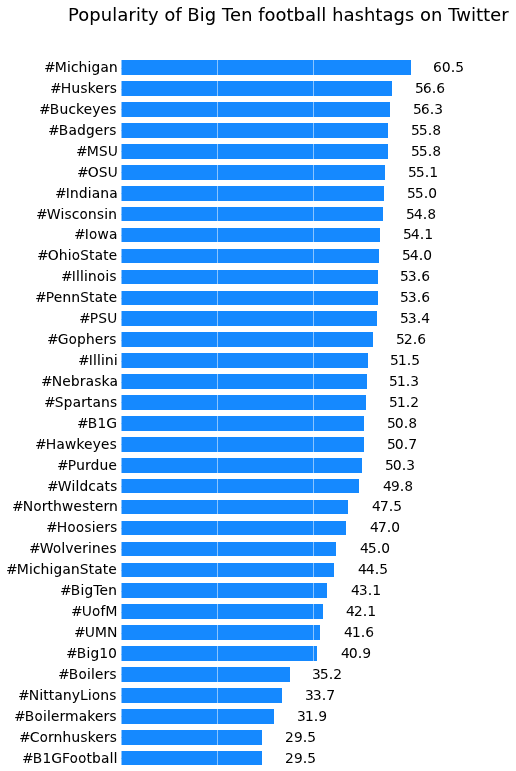 The above analysis is already tremendously helpful for us: Now we know that #Michigan, #Huskers, and #Buckeyes are the three most popular hashtags within the Big Ten community. This tells us that these hashtags probably have the most people paying attention to them because people that use hashtags also generally follow them.

Another great feature about Hashtagify.me's hashtag network visualization is that is tells us how related each hashtag is to each other. In this case, "relatedness" is a measure of how often the hashtags are used together in the same tweet. If we again record all of these relatedness scores, we can produce a nice map of the Big Ten hashtag network. There are several different tools that we can use to visualize these kinds of networks, but I used Gephi in this case study because it's free, open source, and easy to use. See Gephi's tutorial on their data laboratory to find out how to input network data and visualize it in Gephi. 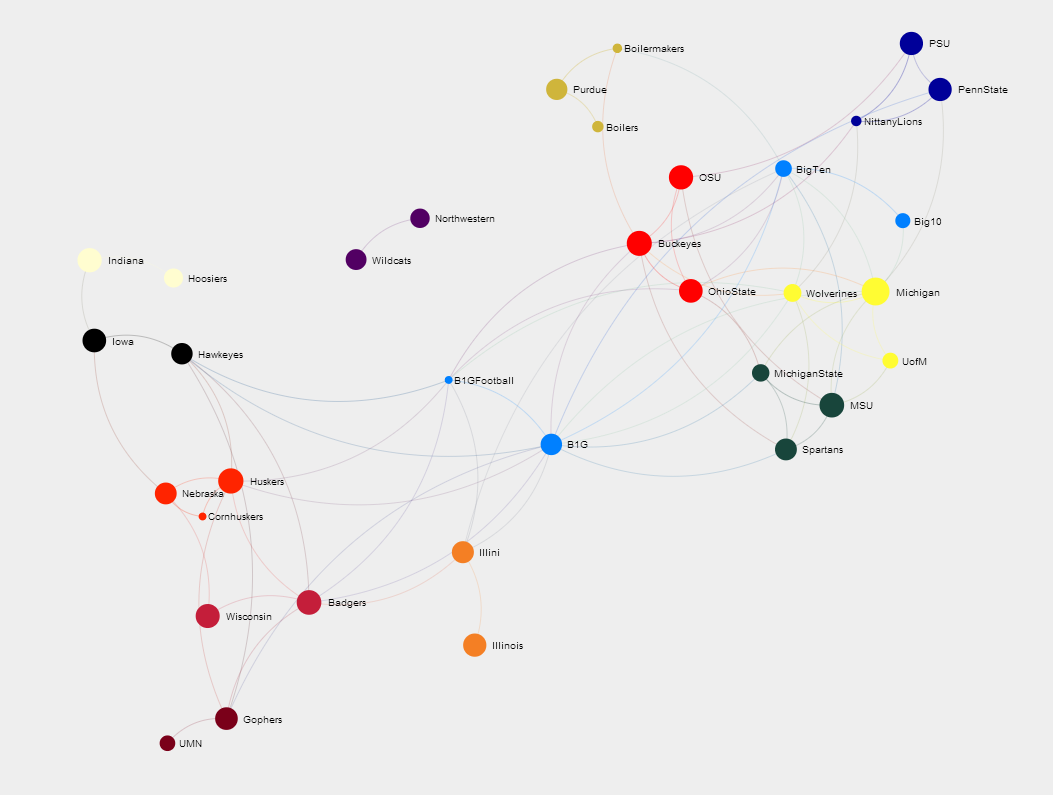 With this network visualization, we now have a better sense of the Big Ten hashtag network. Despite the fact that #B1G is fairly average in popularity for this network, it appears to be highly related to several of the other sports team specific hashtags.

How to identify key hashtags in a community

The most popular hashtags in a community aren't necessarily the best hashtags to use for that community. If we used #Michigan, for example, we'd be reaching a large number of people, but we'd only be targeting people that follow the Michigan sports teams. Instead, we want to identify the hashtag that's both popular and is used frequently with several other popular hashtags in the community. In other words, we want to find the hashtags that are most central to the community.

Fortunately, several smart people have already worked out this problem for us. We can use measures such as eigenvector centrality and betweenness centrality to find the most central hashtags. In short:

In this case study, we want to find the hashtag that has a large influence on the entire Big Ten community and tends to spread information to all of the other school's sports teams. Just our luck, Gephi has built-in tools to calculate both of these measures, so all we have to do is click a couple buttons and it calculates these centrality measures for us. 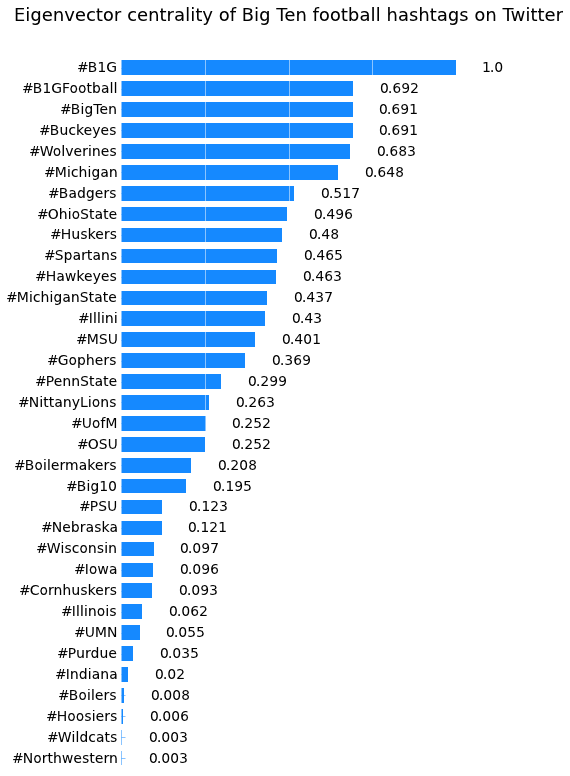 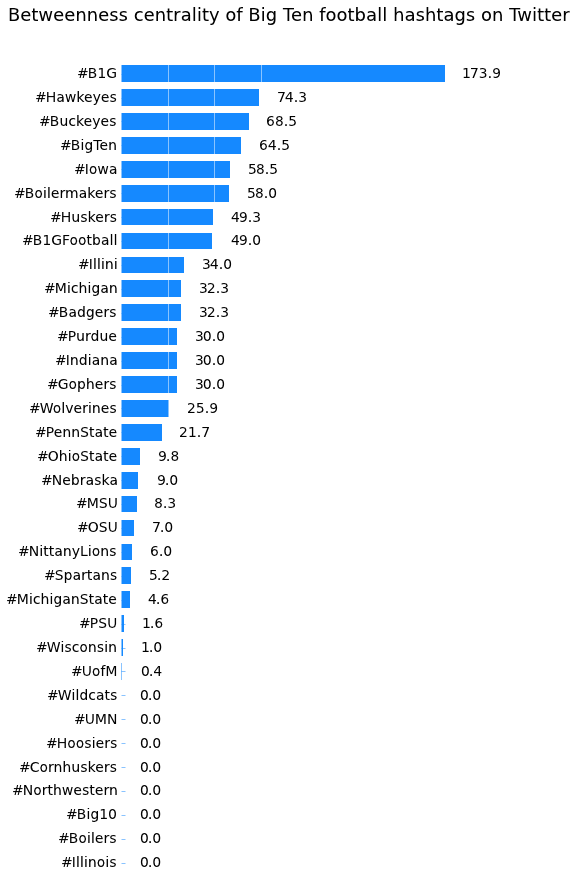 As expected from the network visualization we made earlier, #B1G is the most influential hashtag in the Big Ten community. #BigTen and #Buckeyes also seem to be reasonable choices to use as a hashtag, but if we want to develop our own hashtag on Twitter, we only have room for one other hashtag. So #B1G it is!

Fun fact: It's especially interesting to note here that some of the most popular hashtags in the Big Ten community, such as #Michigan, #Huskers, and #Badgers, have about the same influence in the community as the least popular hashtag, #B1GFootball. This just goes to show that even in online social networks, size isn't everything!

If we go back to Hashtagify.me and compare the Big Ten community's most influential hashtag's popularity over time, we make another great finding: #B1G is the only hashtag that hasn't been tanking in popularity since the end of the primary college football season. Now we know for sure that #B1G is the hashtag we should include in our tweets if we want to get the most attention from the Big Ten community on Twitter. 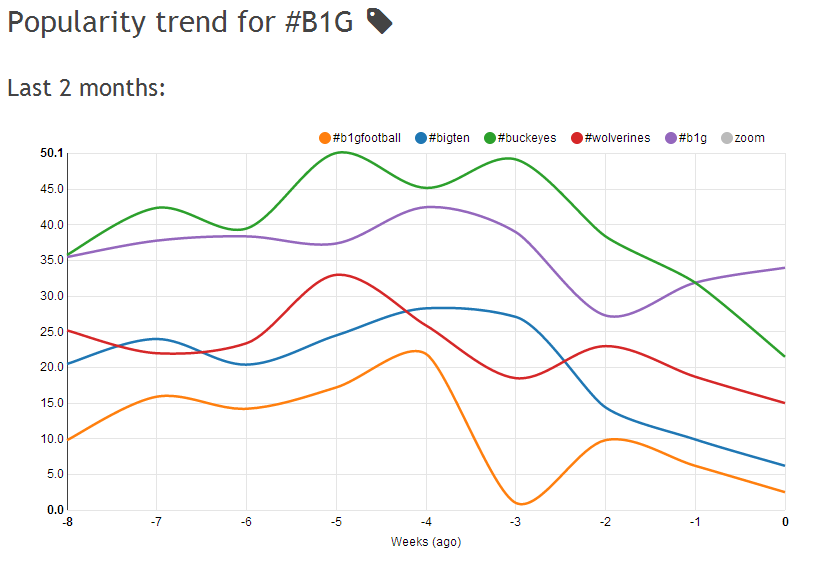 Learning how to use the key hashtags with Hashtagify.me

Now that we've decided that #B1G is the best hashtag to use for our marketing purposes, we need to learn how to use the hashtag. After all, each online community has their own social norms and inside jokes. If we barge in with a tweet blatantly advertising our brand, we're more likely to anger the community than make them want to consider our products. That's where another handy Hashtagify.me tool comes in: hashtag top influencers. 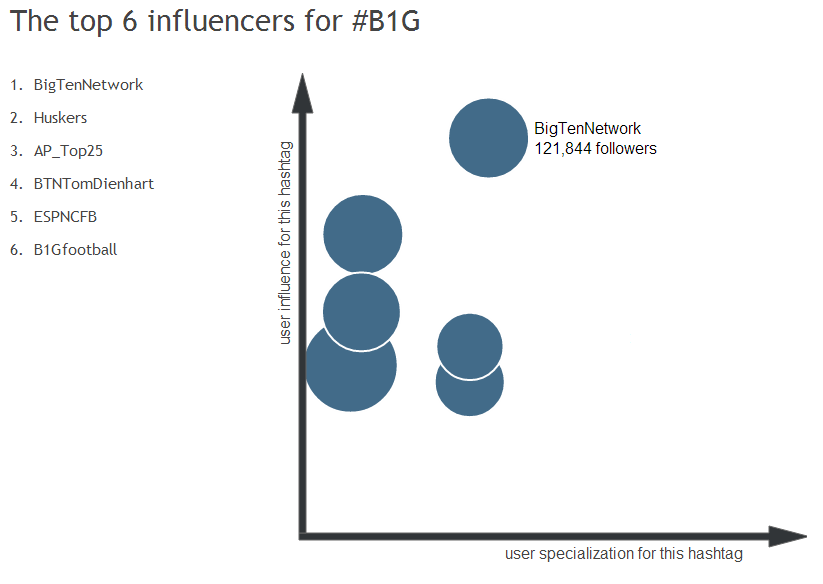 @BigTenNetwork is clearly the most influential Twitter user for the #B1G hashtag, so they're likely the best user to learn the social norms from. We can take a quick scroll through their tweets to see what kind of tweet receives attention with the #B1G hashtag. Here's one successful tweet:

Most of the successful tweets have minimal text, a large picture of something related to Big Ten sports, and are usually congratulating a sports team on their victory. There are several creative ways to construct a tweet that could market your own brand while fitting this profile, but I'll leave that to you as the brand marketer!

As if all that weren't enough, Hashtagify.me takes it to the next level by even telling you when the hashtag is used the most. 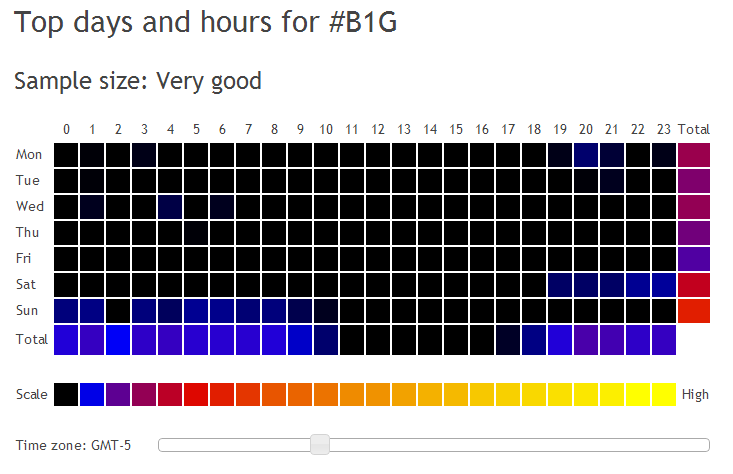 We see some fairly clear trends here: #B1G is used the most on Saturdays and Sundays in the mornings before 10am EST and in the evenings after 6pm EST. Although we could employ a strategy to tweet when fewer people are tweeting on the hashtag (between 11am and 5pm EST), most likely the people who follow #B1G will only check Twitter for it during the hours that it's normally used. As such, we should tweet when #B1G is used the most to connect with more users.

What are you waiting for?

Stop missing out on potential customers by sending out tweets with the wrong hashtags at the wrong times. Come join Hashtagify.me today so you can maximize your brand's reach on Twitter.