The cost of war in Iraq and Afghanistan

For the past decade, the folks at iCasualties have been painstakingly keeping records of the fatalities in the wars in Iraq and Afghanistan. Unfortunately, a good portion of the data is presented as tables of numbers that most of us will glaze over by the third row. As Richard Hamming famously said, "The purpose of computing is insight, not numbers." In that spirit, below is my attempt to glean some insights from iCasualties' data through visualization. 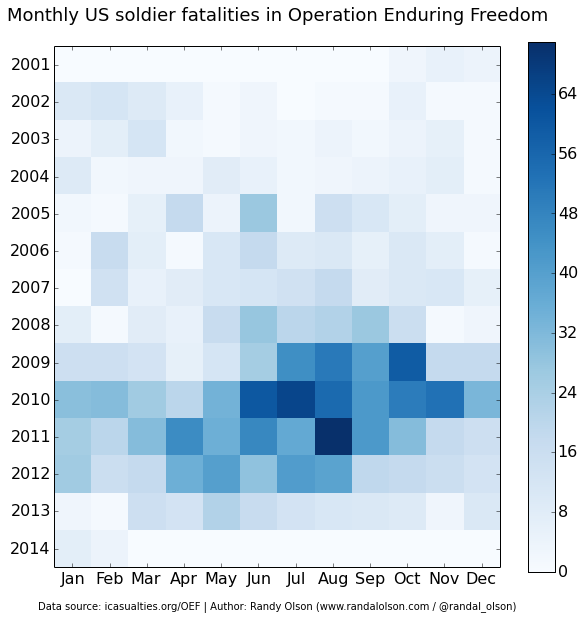 The first 8 years of the war in Afghanistan saw relatively few US fatalities compared to when President Obama sent in several surges of troops between 2009 and 2012. We even see the deadliest month of the war -- August 2011 -- when the Chinook helicopter carrying a team of Navy Seals was shot down in Afghanistan.

This plot makes me wonder: if we were able to make progress in Afghanistan without so many fatalities for the first 8 years, were the troop surges really necessary?

Also note that there are still US fatalities in 2014. Even though we've moved our gaze to other matters, the war in Afghanistan is still ongoing. 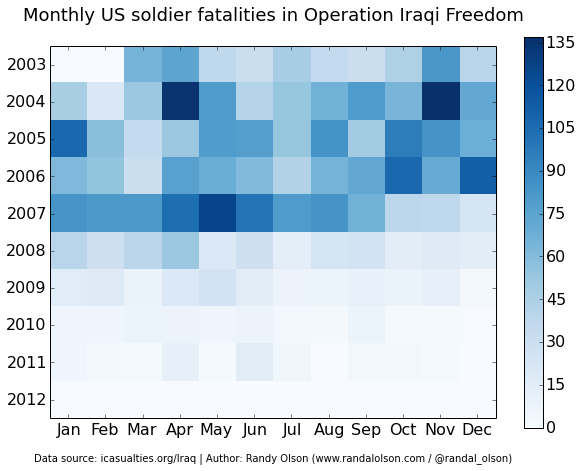 It's amusing (but sad) to see how far off President Bush's "Mission Accomplished" speech in May 2003 was. Despite his claim that all major combat operations were over in Iraq, the death toll that accumulated over the next 9 years tells us otherwise.

One of the first things that stands out to me here are the two deadliest months in 2004. Both of these months align with the deadliest battles of the Iraq war over Fallujah. Note that this was also during election year, when American patriotism and public support for the Iraq war was relatively high. Could these deadly battles have been pushed by politics rather than military strategy?

We clearly see the effect of President Bush's troop surges in 2007. Contrary to the troop surges in Afghanistan, after the initial spike in fatalities for the first half of 2007, the fatalities drop and continue dropping for the remainder of the war. Could it be that this troop surge "paid off," considering how deadly the Iraq war was before the surges?

If we compare this plot with the plot for Afghanistan, note that 2008 -- conveniently, election year when support for the war was relatively low -- was the only year that didn't see a considerable spike in US fatalities in both theaters. Coincidence?

Now it's your turn. What other insights can we glean from these plots?