It’s impossible to work your way through college nowadays, revisited with national data

Last weekend, I wrote a brief rant about how it's far more difficult to work your way through college nowadays than 30 years ago. Some folks took it for a scientific study rather than the rant it was, and criticized it for only looking at Michigan State University's tuition trends. In response, I decided to run a proper analysis of national public university tuition data.

With the help of some of my awesome Twitter followers, I managed to find a comprehensive data set of the in-state tuition costs for all public 4-year universities in the U.S. from 1987 through 2010. Combining that data with the Federal minimum wage trends from before, we get the chart below showing the number of hours a student would have to work on minimum wage to pay for 1 year of public university tuition in the U.S.

To save you the data wrangling, I'll provide the data set here. 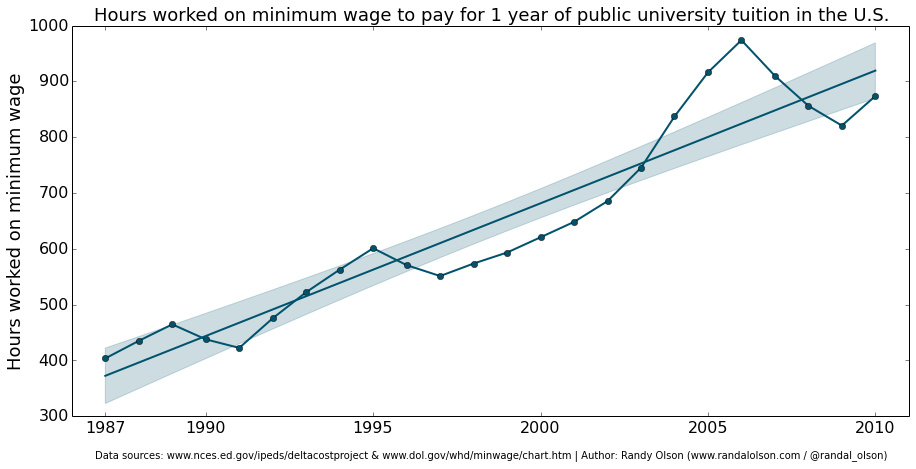 Hours worked on minimum wage to pay for 1 year of public university tuition in the U.S.[/caption]

To get a better sense of the trend, I fit a linear regression to the data. According to the model, students have to work 23.7 extra hours every year to pay for tuition. If we extrapolate this trend back to 1979 and forward to 2013, we recover the same trend that I found in my previous post: The average university student in 1979 only had to work 182 hours per year (a part-time summer job) to pay for tuition, whereas the average 2013 student had to work 991 hours (a full-time job for half the year). That's over 5x as many hours worked for the same education!

I should point out that I'm only considering tuition & fees in this analysis, and I've completely left out room & board, book costs, gas & car repair, and other miscellaneous expenses that build up when students are in college. Given the widespread reports that wages aren't keeping pace with inflation, this plot would only look even more dismal if I factored those costs in as well.

Other commenters were eager to point out that I left out financial aid from this analysis. If the Federal aid trends in the past 30 years are any indication, students actually have less of their tuition costs paid for by financial aid nowadays than 30 years ago! With rising costs and lowered financial support, it's no wonder that student debt has spiraled out of control in the past decade. The system is practically setting the modern university student up for financial failure.

In summary, I'd like folks to stop toting their college financial success stories as an excuse for the insane costs of tuition nowadays -- you're the exception, not the rule.