A data-driven exploration of the evolution of chess: Moves, captures, and checkmates

For the 4th installment in my series of blog posts exploring a data set of over 650,000 chess tournament games ranging back to the 15th century, I wanted to look at how chess moves have changed over time. Again, I only have reliable data on chess games back to 1850, so 1850 will be my starting point.

One thing I was interested in is whether preferences for specific chess moves have changed over time. Was the all-powerful Queen more popular in the past, then lost favor as new strategies developed? Or has capturing pieces become more common nowadays than in previous years?

Thankfully, each chess game is recorded in PGN format, which means that it stores every move each player made, the outcome of the game, etc. Here's an example game in PGN format:

Notice the extra notation beside the location that the piece moved to: N, B, x, +, etc. Each of these symbols have a particular meaning, e.g., "Qxe7" means that the Queen moved to e7 and took a piece. This notation makes it fairly easy to parse out what pieces are moving where, how many pieces were captured, etc. I charted the evolution of preferences for these movements below.

One of the biggest questions I wanted to answer with this project is whether capturing pieces has become more or less common nowadays. From my own experience, I noticed that as I became more skilled at chess, I became less focused on capturing all of my opponent's pieces and more focused on controlling the board. Has chess as a sport similarly progressed this way over time? 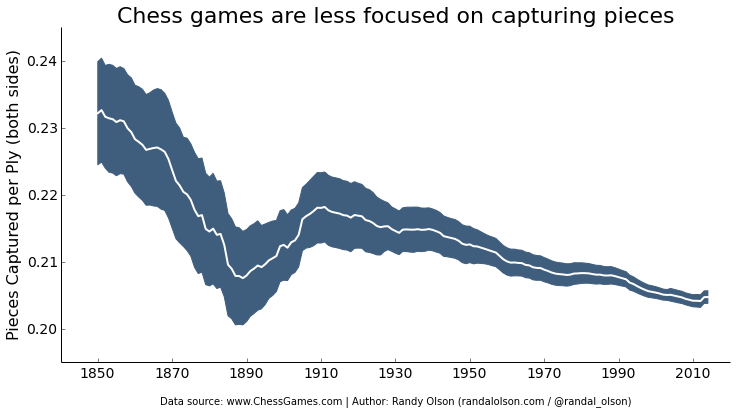 Over time, the average chess game has consistently ended with about 16 pieces captured between the two sides. Despite the fact that chess games are getting longer, more pieces aren't being captured in that extended time period. Whereas a piece was captured every 4 ply in 1850, a piece is captured every 5 ply in 2014. This may indeed be because chess games are increasingly becoming more strategic, focusing on gaining control of the board rather than capturing more pieces.

If chess games are becoming more strategic, then we should expect to see more checkmates over time. Surprisingly, we see the opposite: Less than 2% of expert chess games end in a checkmate in 2014, down from 8% in 1850. I was puzzled by this finding until it occurred to me that most expert chess players are able to predict the next few moves in every game, and therefore resign or call a draw well before the checkmate has occurred. The overall decline in checkmates over time is possibly explained by the fact that draws are becoming the norm in expert chess play, meaning there's fewer games that even come close to a checkmate. 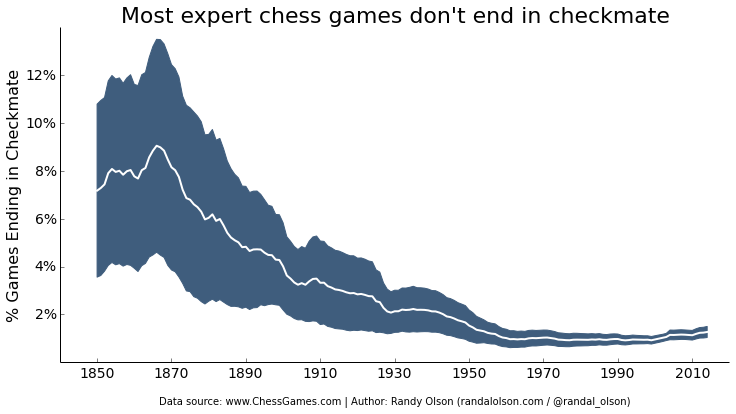 We can also look at whether chess players have preferred to use different pieces over time. My favorite piece when I first started to play was always the Queen, but in more recent games I've discovered how powerful Knights can be early on. Below, I charted out the move rates of the pieces over time. "0.33" means that the piece is moved every 1 / 0.33 = 3 ply. 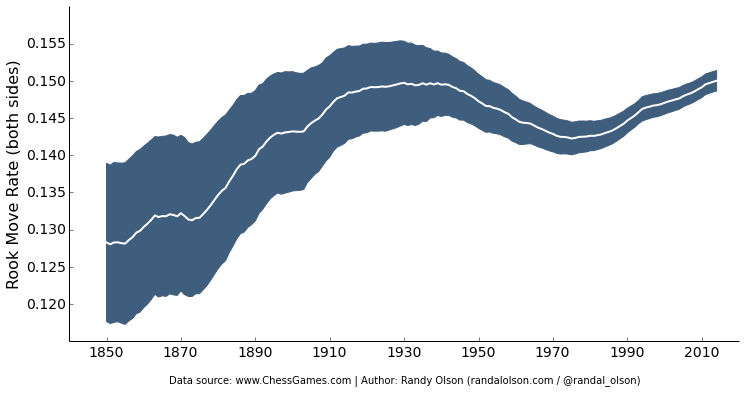 Rooks became considerably more popular to use between 1850 and 1900, then leveled off at being used every 7 ply since then. I'd love to hear a chess historian's perspective on this. Perhaps a popular chess book was published around 1850 highlighting new strategies for the Rook? 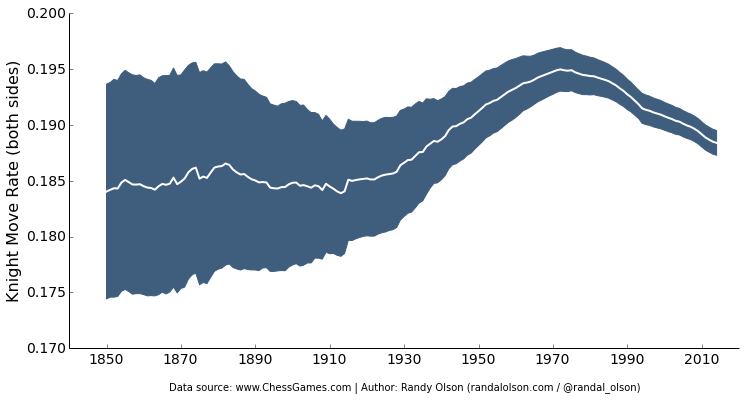 Meanwhile, Knights and Pawns saw a steady increase in popularity from 1920-1970. My best guess is that this is a direct result of the rise of the Hypermodernism school of chess after WWI, which advocated usage of Pawn chains and Knight outposts, both strategies heavily involving Pawns and Knights. 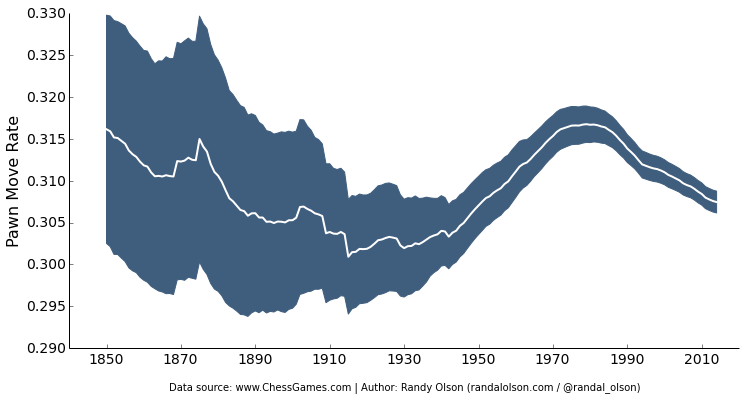 Interestingly, Pawns and Knights started falling out of favor in the 1970s, right when Bobby Fischer shook up the chess world with his dramatic march to become World Champion. Did Fischer's breathtaking campaign change chess as we knew it?

Finally, King, Queen, and Bishop move rates have remained more-or-less the same over time. I actually find it pretty incredible that we can see much of a change in piece preferences at all, considering that chess strategies are changing so much over time. 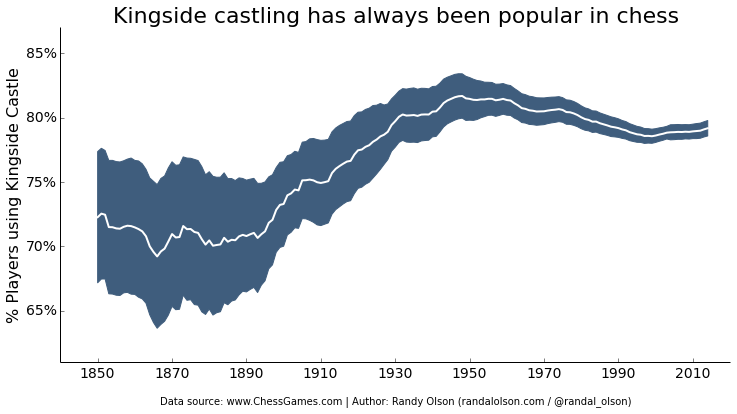 Kingside castling is by far the most popular move (used by 80% of players today) because it requires only 2 pieces to be moved out of the way before it can be done, instead of 3 pieces with the queenside castle. Considering that preferences for queenside castling (below) have remained fairly consistent, I can only guess that players who previously never castled started to realize the value of castling in the 1890s. 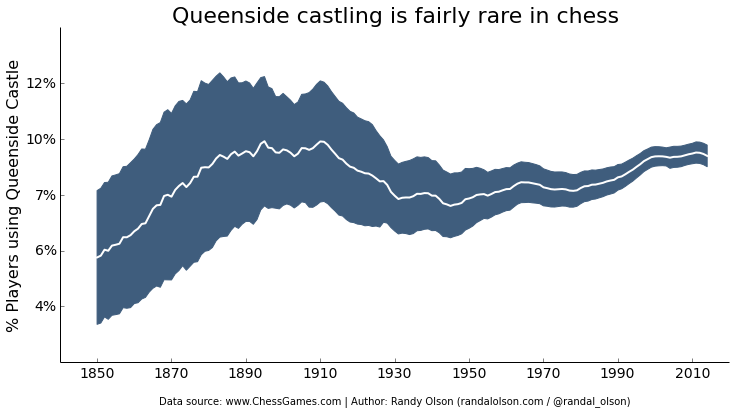 In contrast to the kingside castle, players have consistently used the queenside castle only about 8% of the time from 1850-2014. It seems that expert chess players want to get their Rooks into play as quickly as possible, leaving the queenside pieces for play later in the game.

That's all for today. In the next installment, I'll be looking at preferences for specific locations on the board.