The myth of the smarter Atheist

Ever since I published my previous article on the average IQ of students by college major, I've received several requests to analyze the correlation between IQ and religiosity. Below, I've written up an analysis of the existing published literature on the topic. I hope this serves as a springboard for future conversation on the topic -- and hopefully puts some tired myths to rest.

One of the few peer reviewed scientific articles I could find on the topic had the straightforward name, "Average intelligence predicts atheism rates across 137 nations." This article analyzes IQ and religiosity data from "137 countries that represent 95% of the world population" and claims to show that nations with more intelligent citizens tend to have more Atheists. I plotted the data from that article below. 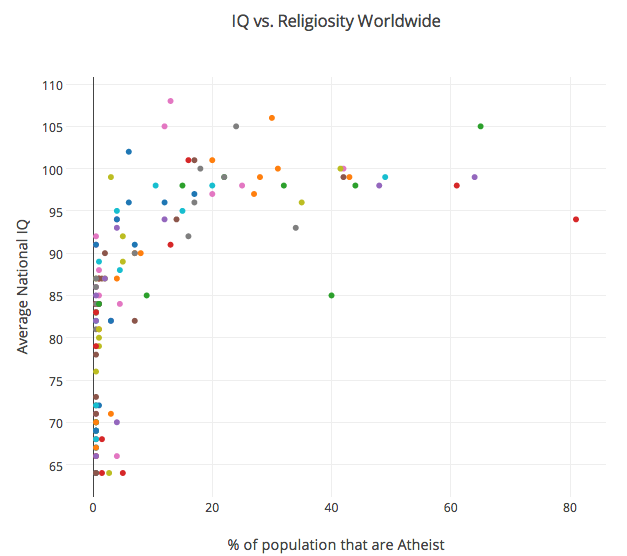 What we see is a fairly weak relationship between national religiosity and average national IQ. Once we get up to about 20% of the population being Atheist, the IQ of the population flatlines at around 100 from then on. Even worse, in the ~0% Atheist range, there's a wide range of national IQs from 64 to 100+ -- with a cluster of low-IQ nations that appear to be driving the "trend."

If we focus on the lowest IQ nations in the above chart, we notice that several of them are poor nations in e.g. Africa. That led me (and others who have reviewed the topic) to wonder whether the wealth of a nation better predicts the average intelligence of its citizens. After all, the more wealthy the average citizen is, the more time they have to dedicate to intellectual pursuits. 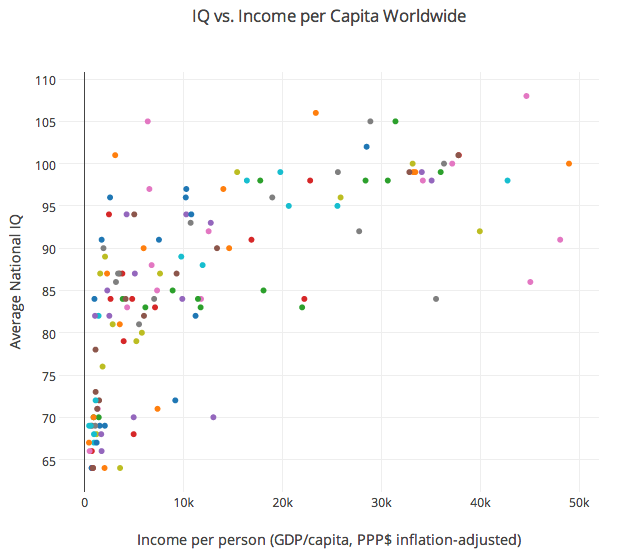 Indeed, if we look at income per capita instead of religiosity, we already see a much better correlation with average IQ. The correlation between religiosity and IQ is too weak to suggest that religiosity predicts intelligence on the national level. Anyone who claims otherwise is grasping at straws.

Looking at national data is fine and dandy, but what about individual-level data? In another controversial research paper on the topic, Satoshi Kanazawa claimed to explain "Why Liberals and Atheists Are More Intelligent." In this article, Kanazawa analyzed data from a longitudinal study following students from middle school through adulthood. Conveniently, the study includes information on how religious the students are and the results of a standardized IQ test. Kanazawa mashed those variables together and claimed to show that Atheists tend to be smarter. I created a less misleading version of Kanazawa's plot below; judge the data for yourself. 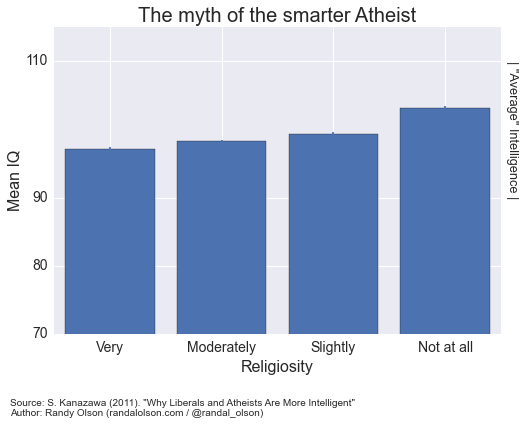 This is where we have to think about effect size vs. statistical significance. The most religious adults had an average IQ of 97.14, whereas the atheist adults had an average IQ of 103.09. That may seem like a wide gap -- 6 whole IQ points -- until we remember that anyone in the IQ range of 90-109 is classified as having "average intelligence." Thinking about this in practical terms: Would you be able to tell the difference between someone with a 97 IQ and someone with a 103 IQ? It's highly unlikely.

So really, all Kanazawa showed is that the average person has average intelligence regardless of how religious they are. I'll leave the discussion of why this guy's work was published in the first place for the comments.

The take-away message? To my knowledge, no amount of research has shown that Atheists are notably smarter than highly religious folks. It's time we put this myth of the smarter Atheist to rest.