For the past couple months, I've been filling my downtime by playing Clash of Clans, a MMO base builder game where you can plunder other player's bases. In hopes of improving my attack strategy, I've read several guides on how to conduct the best attacks in the game. One thing that's missing from these guides, though, is an analysis of how efficient the attacks are. It's one thing to completely annihilate your opponent, but it's another challenge altogether to annihilate your opponent while expending as few resources as possible.

To start up the conversation on attack efficiency in Clash of Clans, I've created several visualizations below looking at the cost and housing efficiency of every troop in the game. All of the data in these visualizations comes from here, and I've provided a tabulated version of the data here. You can access the interactive versions by clicking on the image.

Unless you're extremely patient, you're probably going to be raiding other player's bases to steal their resources so you can build up your own base. That means that you'll want to do as much damage to your opponent's base while spending as few resources as possible. Below, I've plotted the DPS and HP that every troop provides for every Elixir it costs. Each point represents an upgrade level for the troop. I had to plot the Elixir and Dark Elixir troops separately because there isn't a clear conversion rate between Elixir and Dark Elixir. 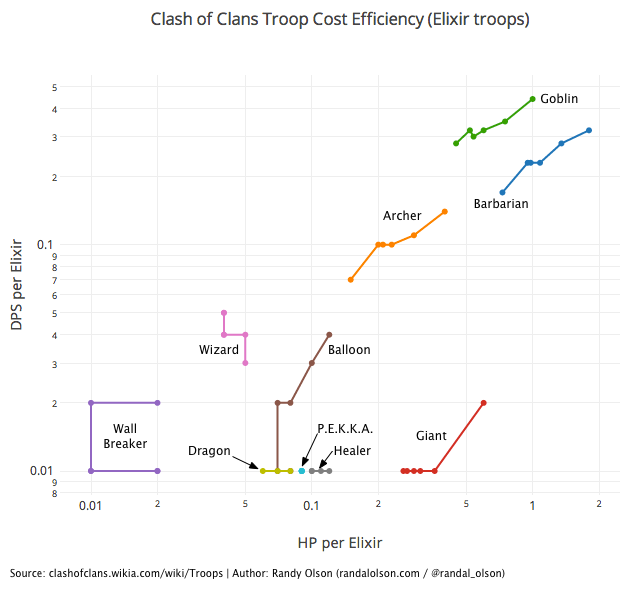 For experienced players, the main result here is likely unsurprising: Barbarians, Archers, and Goblins give you the biggest bang for your buck. Don't go raiding for resources with Giants, Wizards, or (worst) Dragons or you'll quickly find yourself losing resources every time you go raiding. 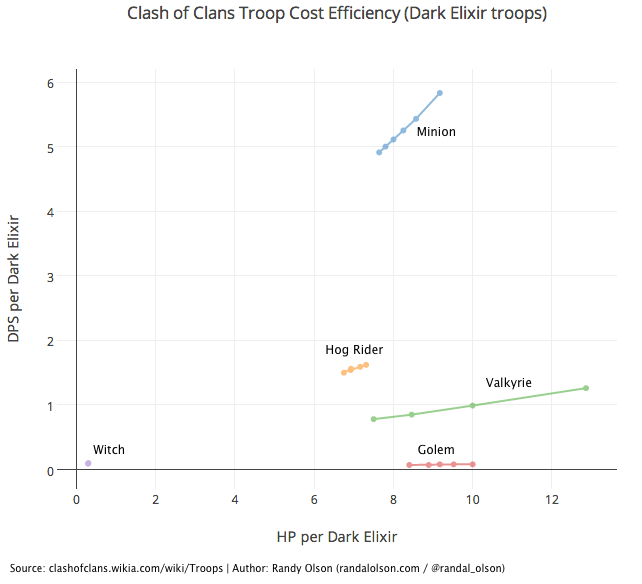 What I found particularly interesting in the interactive versions of these plots is that almost every troop in the game becomes less cost efficient as you upgrade them. Upgraded troops may be stronger (and more fashionable), but you don't get as much out of them per Elixir.

Of course, Clash of Clans isn't always about raiding villages for resources. Especially during Clan Wars, you'll want to completely wipe out your opponent's base so your clan gets more victory stars. In this case, your limiting resource becomes housing space. Every base can only support so many troops, and some troops take up more space than others. Below, I've plotted the DPS and HP that every troop provides for every housing space it takes up. 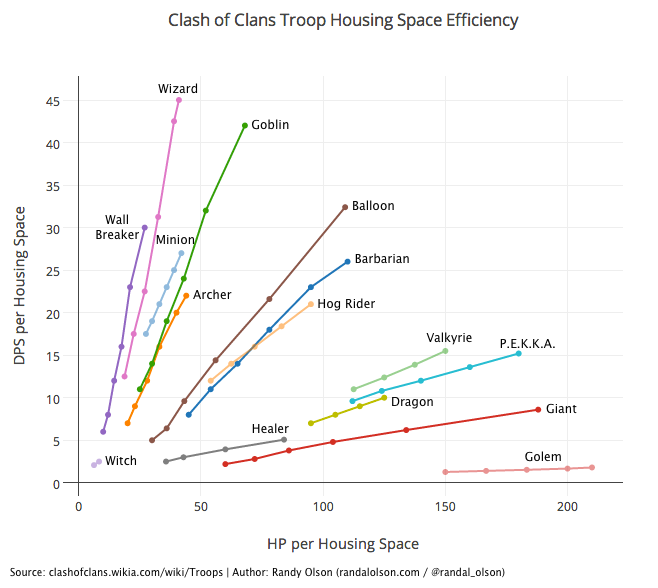 The Golem stands tall as the ultimate tank in the game, whereas Wizards dish out the most damage per housing space (with Goblins as an underrated runner up). Higher-level Barbarians and Balloons seem to provide the best of both worlds, providing both ample DPS and HP for every housing space they take up.

Again in the interactive version, you'll note that -- unsurprisingly -- all troops provide more DPS and HP per housing space as they're upgraded. This is ultimately the reason you should always upgrade your troops, even if they provide less bang for your purple buck.

Keep in mind that every troop has a particular purpose. Healers are useless by themselves, but they have great synergy with high-HP troops like the Giant. Goblins may have high DPS, but they attack defenses last and will die in droves if Wall Breakers don't open up the base for them. Think of these charts as a stepping stone, not a Rosetta stone, for crafting your perfect Clash of Clans attack strategy.