Do men on OkCupid follow the Standard Creepiness Rule?

One of my favorites, by far, is the comic titled "Dating pools."

If we plot the Standard Creepiness Rule out for men: 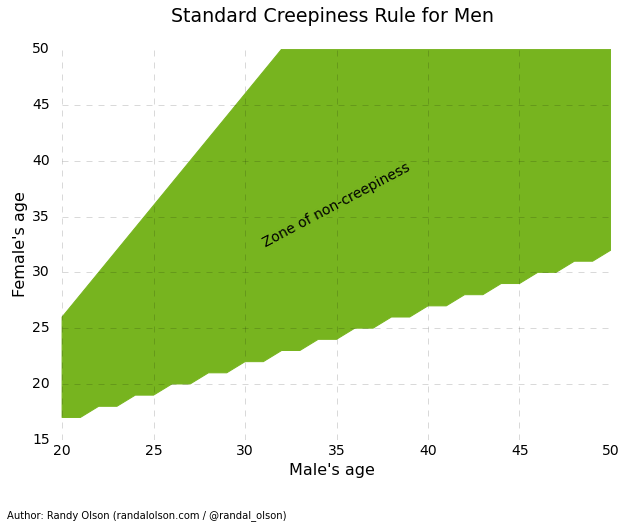 (Note that you can easily just change the axis labels in the above chart and it works just as well for women.)

It just so happens that Christian Rudder released his book Dataclysm last week, which features a chart showing us the age range that men search on OkCupid for when looking for women to date. One of my first thoughts when I saw this chart was: Do men on OkCupid follow the Standard Creepiness Rule?

(And now we see why the last panel of the XKCD comic above applies so well to me...) 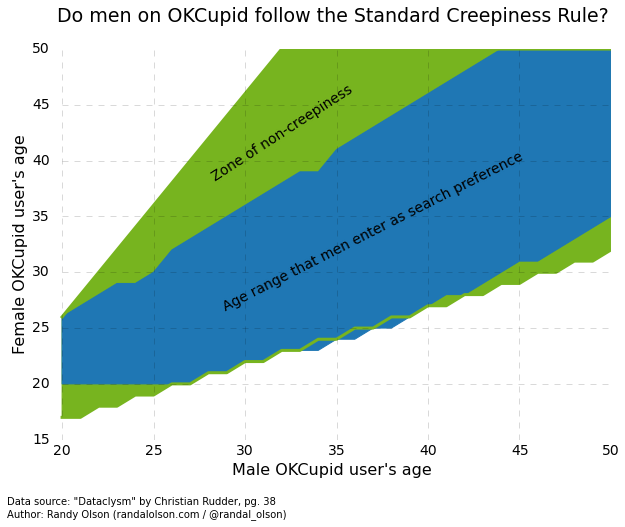 Sure enough, if we overlay Rudder's OkCupid data over the first chart, we see that men follow the rule almost exactly. There are a few spots in the mid-30's where men seem willing to dip ever so slightly past the safe zone of non-creepiness, but that trend quickly ends by their 40's.

Another interesting trend is how men aren't even close to reaching the upper bound of the zone of non-creepiness. According to the Standard Creepiness Rule, it'd be perfectly fine for a 30-year-old man to date a 45-year-old woman, but apparently 30-year-old men are already struggling with the idea of dating a 37-year-old!