One of the most commonly asked questions about reddit is, "What is the most popular reddit post of all time?" It's easy enough to go to /r/all/top and see the posts with the highest score, but thanks to reddit's vote fuzzing mechanism, a post's score isn't a reliable measure for how much attention the post received once it reached the front page. What we really want to know is which post received the most upvotes.

The plot below is the result of crunching 6 years of reddit post data from 2008-2013. For each day, I've plotted total number of upvotes the most popular post received. I annotated a few posts that stood out. 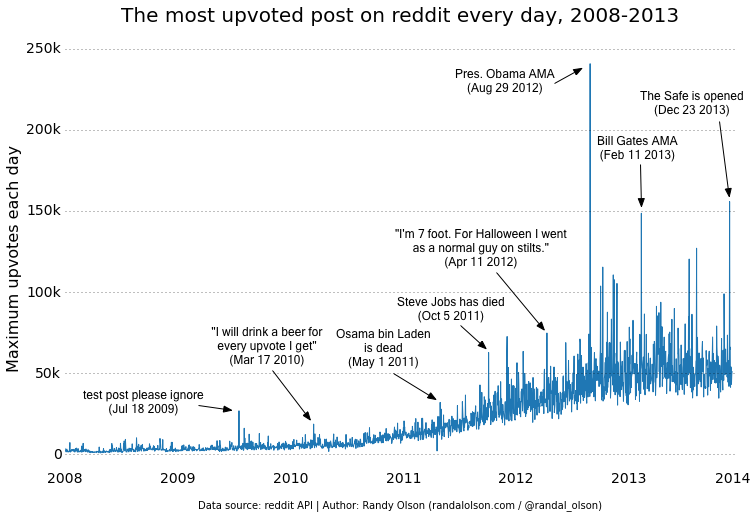 The infamous "I will drink a beer for every upvote I get" thread soared to the upvote charts on St. Patrick's Day 2010, when redditors seemed intent on upvoting /u/chuckieballs under the table. By the time the thread was archived, /u/chuckieballs owed the reddit community 18,574 empty cans of beer. If /u/chuckieballs drank 11 beers every day between that day and today, he still wouldn't be finished fulfilling his promise.

In 2011, we really start to see reddit become a major source for breaking news. With the announcements of Osama bin Laden's and Steve Jobs' deaths topping the front page of reddit before most major news sources knew what was happening, it's no wonder that reddit is often considered a major source of breaking news.

Similarly in 2012 and 2013, we see major AMAs popping up on reddit, including President Obama's AMA on August 29, 2012 and Bill Gates' AMA on February 11, 2013. This chart really puts Obama's AMA into perspective: The amount of traffic that Obama's AMA drove to reddit was unprecedented and hasn't even come close to being matched since.

Despite its growing popularity, reddit has maintained its sense of community that makes it so unique. For example, reddit ended 2013 with a bang with the announcement that The Mystery Vault had finally been opened. The top comment on the announcement thread summarizes the findings best: "Merry Christmas, reddit. You get nothing."