What makes for a stable marriage?

About a decade ago, the gossip on everyone's lips was that "1/2 of all marriages in the U.S. end in divorce." That factoid was later disproven, but it left a lasting impression on the eligible bachelors and bachelorettes of America. In an effort to not become a part of that statistic, I started doing a little research on what makes for a stable marriage in America.

Earlier today, I ran across an interesting study on divorce titled 'A Diamond is Forever' and Other Fairy Tales: The Relationship between Wedding Expenses and Marriage Duration. The authors of this study polled thousands of recently married and divorced Americans (married 2008 or later) and asked them dozens of questions about their marriage: How long they were dating, how long they were engaged, etc. After running this data through a multivariate model, the authors were able to calculate the factors that best predicted whether a marriage would end in divorce.

What struck me about this study is that it basically laid out what makes for a stable marriage in the U.S. I've highlighted 7 of the biggest factors below. I highly recommend checking the study out yourself (linked above) to look at all of them.

How long you were dating

First, I'll orient you on how to read these graphs. The authors always chose one category as the "reference point." That means that all of the other categories are compared to that category. Below for example, "20% less likely" means that couples who dated 1-2 years before their engagement were 20% less likely to ultimately end up divorced than couples who dated less than a year before getting engaged. 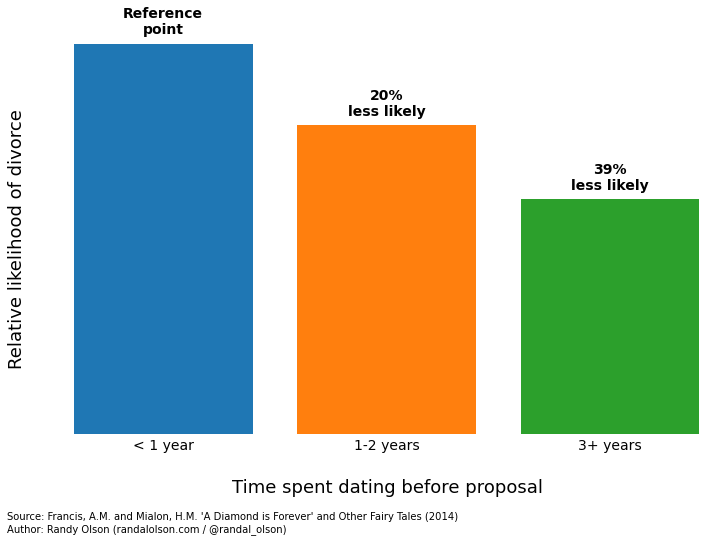 What we see above is that dating 3 or more years before getting engaged leads to a much more stable marriage. This finding probably comes as no surprise, but it should stand as a warning to those who are eager to get married right away. Don't jump into marriage before you really get to know someone.

How much money you make

One depressing finding was that wealthier couples are less likely to end up divorced. The correlation couldn't be clearer: The more money you and your partner make, the less likely you are to ultimately file for divorce. 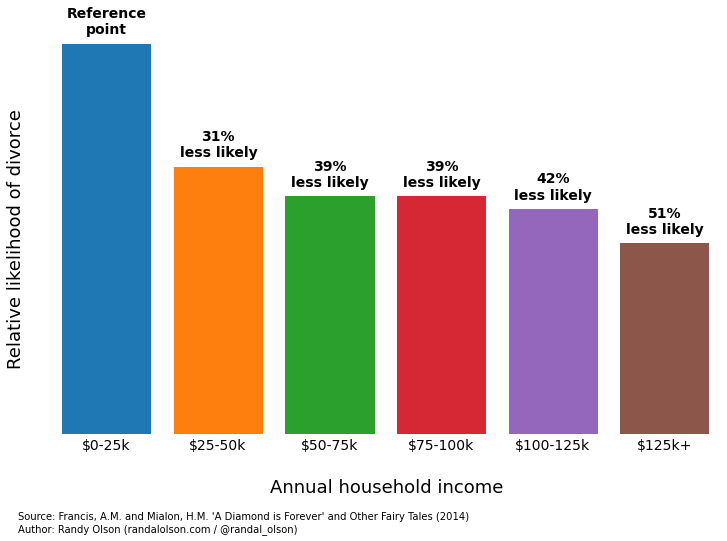 How often you go to church

Perhaps another important -- but unsurprising -- finding was that couples who attend church regularly have much stabler marriages. In fact, couples who never go to church are 2x more likely to divorce than regular churchgoers. 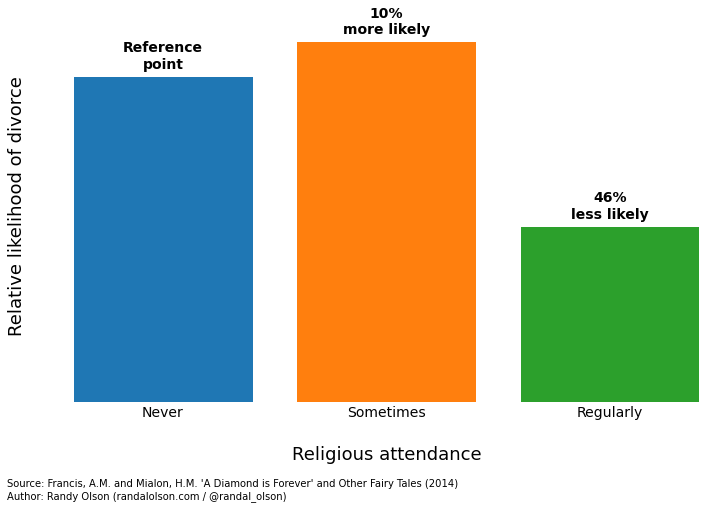 Your attitude toward your partner 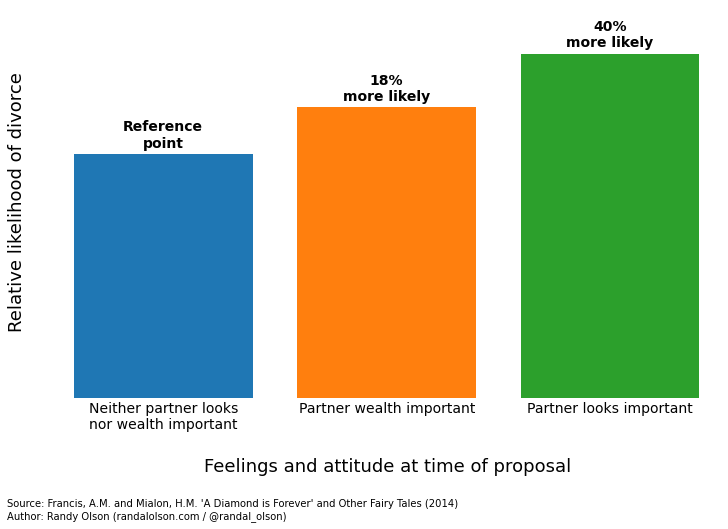 How many people attended the wedding

If you're following the above guidelines, you've been dating your partner at least 3 years before getting engaged, making a combined $125k salary, go to church together regularly, and don't worry about your partner's wealth nor looks. The Big Day is coming up and you're set to be happily married for life, right? Wrong!

Crazy enough, your wedding ceremony has a huge impact on the long-term stability of your marriage. Perhaps the biggest factor is how many people attend your wedding: Couples who elope are 12.5x more likely to end up divorced than couples who get married at a wedding with 200+ people. Clearly, this shows us that having a large group of family and friends who support the marriage is critically important to long-term marital stability. 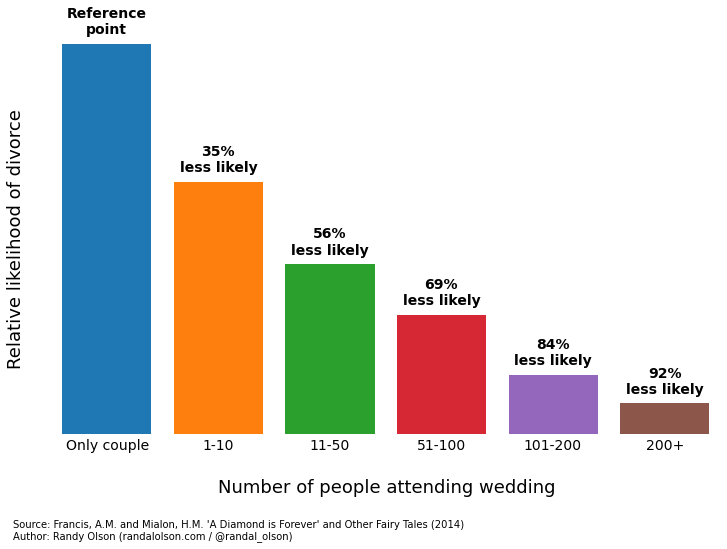 How much you spent on the wedding

The last graph would have us think that if we want a long-lasting marriage, we better be prepared to burn a hole in our pocket paying for a huge wedding. Yet the findings below completely contradict that intuition: The more you spend on your wedding, the more likely you'll end up divorced. The particularly scary part here is that the average cost of a wedding in the U.S. is well over $30,000, which doesn't bode well for the future of American marriages. 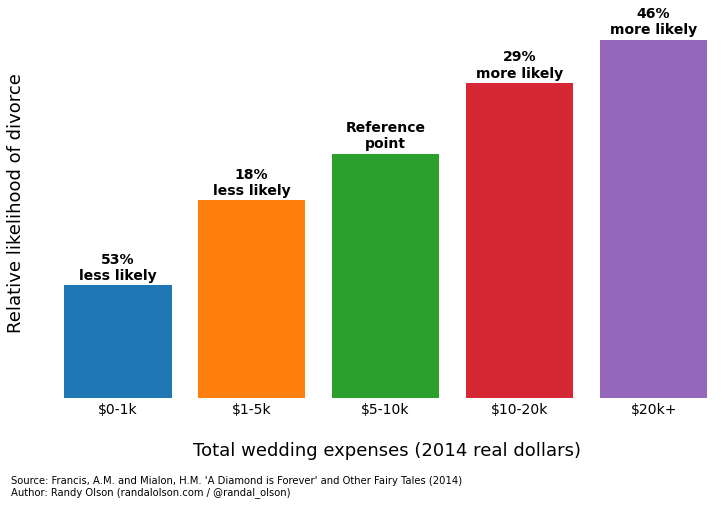 In the research paper, the authors suggest that the financial burden incurred by lavish, expensive weddings leads to financial stress for the couple, which ultimately tears the marriage apart. They found that women, in particular, are vulnerable to divorce after expensive marriages: women in couples who spent $20,000 or more on their wedding are 3.5x more likely to end up divorced than their counterparts who spent less than half that.

In other words, Bridezilla = Divorcezilla. Don't let advertisers fool you into spending your life savings on your wedding.

Whether you had a honeymoon

Whatever you do after your marriage, don't skimp on the honeymoon! 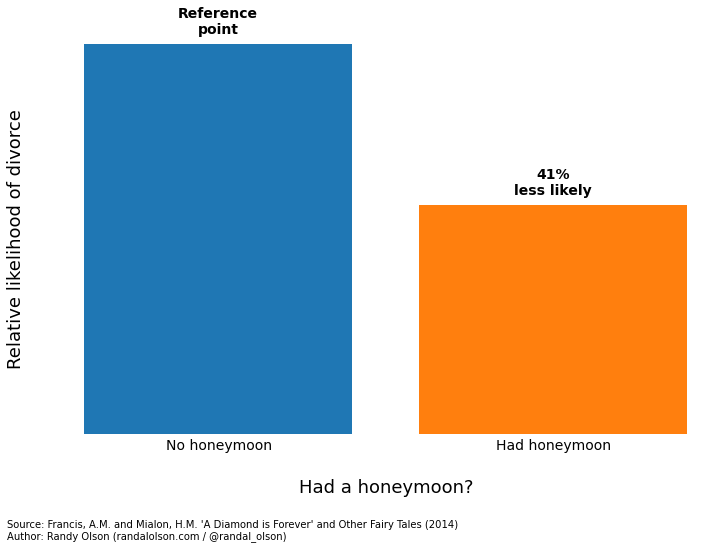 Of course, it’s important for us to keep in mind that these are all correlations with marriage stability, and they could be telling us any number of things. For example, the "how much money you make" correlation could go either way: Either people in stabler marriages are more likely to have a higher income, or couples with a low income could be more likely to divorce. All of the explanations I wrote above are my own interpretations of the correlations, but keep an open mind when thinking about what could really be driving these correlations with marriage stability.