Who's responsible for gas prices at the pump?

With gas prices hitting an all-time low for 2014, many of us are left to wonder: Who's responsible for gas prices at the pump? According to the UT Energy Poll, the largest national poll on energy issues, 7 in 10 Americans believe that oil and gas companies are one of the biggest deciders in the price of gas. Given that so many Americans seem convinced on this issue, I decided to delve into gas prices a little further to see if this widespread belief held up to scrutiny.

If you're in the know about gas prices, you probably haven't been surprised to see the reports that the price of crude oil has also been steadily declining for the past few months. What we see here is a correlation: As crude oil prices go down, gas prices quickly follow. The big question is: Does this correlation hold up over several years? 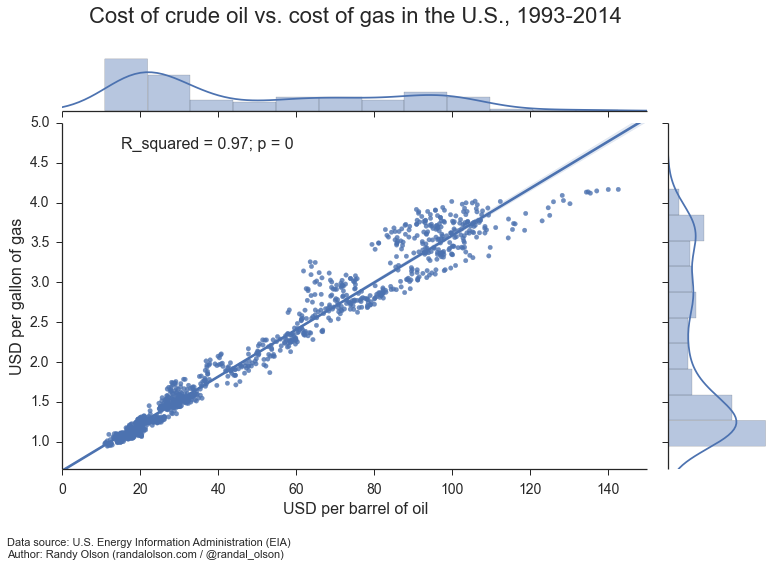 (Note: I didn't adjust for inflation here because I'm not making comparisons between time points.)

What we see here is a near-perfect correlation over 21 years of oil and gas prices. In other words, oil and gas companies seem to have little to do with the price of gas; they simply follow the standard set by international crude oil prices. That's not to say that oil and gas companies don't add their own expenses to the cost of gas (as they should), but they aren't the ones responsible for those sudden spikes in gas prices that we see every now and then.

If oil and gas companies aren't responsible for gas prices, then who is?

According to the experts, commodity speculators play a huge role in determining the international price of crude oil. They keep an eye on the current worldwide supply and demand for crude oil, terrorist threats and disturbances, changing international markets, and several other indicators to best estimate the total supply and demand for crude oil in the future. In turn, these estimates directly affect the price of crude oil -- and ultimately, how much you pay at the pump.

But that's a theory left to investigate another day.