Back in my teenage years, I was absolutely addicted to MMORPGs. As soon as I got home from school, I was plugged into whatever virtual world I was currently bent on conquering with my comrades-in-arms. Suffice to say that when I ran across a data set of MMORPG subscriptions over time, I was quite keen on taking a data-centric look at how MMORPGs have risen and waned in popularity over time.

Below, I charted the percentage of total MMORPG subscriptions every month for each MMORPG between 1998 and 2013. You'll notice that some MMORPGs don't even show up, and that's either because they didn't have a normal subscription-based model (à la Guild Wars) or the games were just an insignificant blip in the history of MMORPG subscriptions. If a MMORPG is missing that doesn't fall under those categories, then these guys are to blame. (Though feel free to mention it here in the comments!) 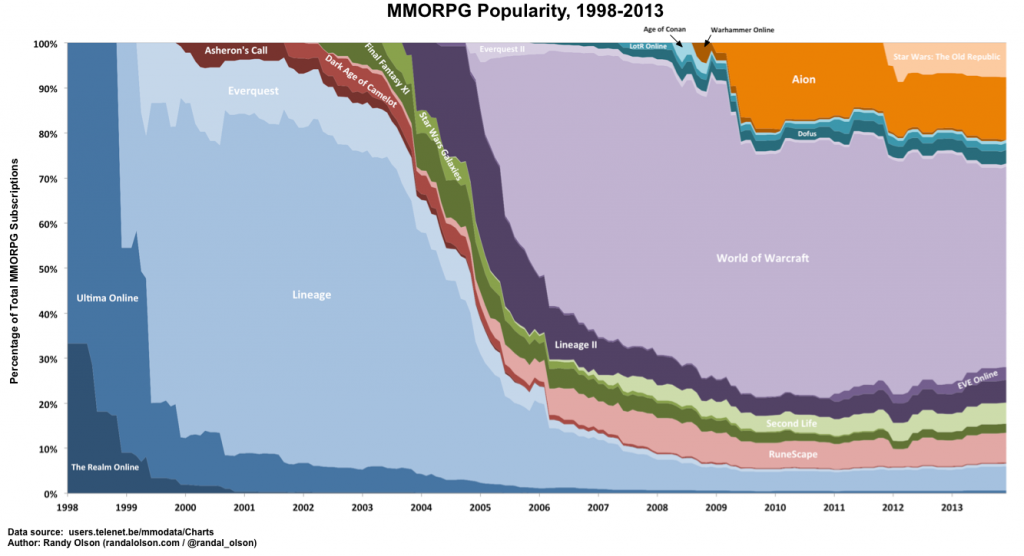 It's crazy to think that only 20 years ago a vanishingly small fraction of people on Earth had access to the Internet. That of course meant that commercial MMORPGs didn't start popping up in earnest until the mid-late 1990s, when there were finally enough people rocking a 56k modem to actually play the games. One of the first graphical MMORPGs to pop up was The Realm Online, an unforgiving turn-based RPG developed by Sierra. Even though it was short-lived, The Realm Online still holds the bragging rights for being one of the oldest graphical MMORPGs that people still play to this day (even if it's only a few dozen players).

What killed The Realm Online? Of course, it was the Great Grandaddy of all MMORPGs: Ultima Online. Widely regarded the first major commercial MMORPG, Ultima Online set the standard for what a MMORPG should be: Thousands of people to playing together at once, massively improved graphics, an extensive PvP system, and GMs who interacted with the players (for better or for worse). Noting the success of Ultima Online, EverQuest and Asheron's Call followed quickly thereafter, forming the "big three" MMORPGs of North America.

Fun fact: EverQuest is infamous for being the MMORPG with the most expansion packs, with 21 expansions released over its 15 years of development.

If you're wondering why you've never heard of (or at least, never played) Lineage despite its overwhelming popularity in the early noughties, that's because it was mostly popular in South Korea. Lineage holds the crown as the first MMORPG to reach 1 million subscribers, and was the first MMORPG to truly dominate the MMO world until World of Warcraft appeared on the scene.

The early noughties saw dozens of MMORPG releases as game companies tried to cash in on the MMO wave. Dark Age of Camelot, Final Fantasy XI, Star Wars Galaxies... all came and went with mild success until the Big Daddy of MMORPGs appeared on the scene.

World of Warcraft was to MMORPGs in North America what Lineage was to MMORPGs in South Korea. Until 2005, MMORPGs were the domain of hardcore gamers who were willing to dedicate a disgusting number of hours grinding to reach the highest echelons of the game. World of Warcraft finally made MMORPGs accessible to the casual gamer who perhaps only had an hour to play every other day.

The late noughties saw several highly hyped but ultimately unsuccessful MMORPGs. (I'm looking at you, Age of Conan and Warhammer Online!) But it also saw the rise of several more niche MMORPGs: Second Life for objective-free play, RuneScape for web browser-based games, and EVE Online for masochists with a penchant for space travel. Meanwhile, Aion became the new Lineage in Asia, marking the third major commercial success for South Korea-based NCSOFT (after Lineage and Lineage II).

So, what does the future hold for MMORPGs? Total subscriptions to MMORPGs have been falling since 2011, but most of those are due to World of Warcraft. Star Wars: The Old Republic (SWTOR) showed us that new MMORPGs can still take hold in the MMORPG ecosystem despite falling subscriptions. And if SWTOR and World of Warcraft are any indication, free-to-play is likely the future of MMORPGs as players grow ever unwilling to pay monthly fees to play a game.

Hopefully this has been as fun and nostalgic journey for you as it has been for me. Now, time to load up that old EverQuest CD...