Top 25 most gender-neutral names in the U.S.

As a long-time fan of Saturday Night Live, I have fond memories of the Pat sketch where Pat's friends were always trying to figure out his/her gender through a series of hilarious indirect tests. Despite their every effort -- from asking Pat which bathroom he/she uses to asking about love interests -- Pat's friends could never figure it out.

Put on some techno music and watch that GIF for a little bit. It totally works.

Part of the Pat skit relied on the fact that "Pat" is a fairly gender-neutral name. It could be short for Patricia or Patrick, so it's tough to tell Pat's gender from his/her name alone. As I was working through the U.S. baby names data set, the Pat sketch got me wondering: What are some other gender-neutral names like Pat? 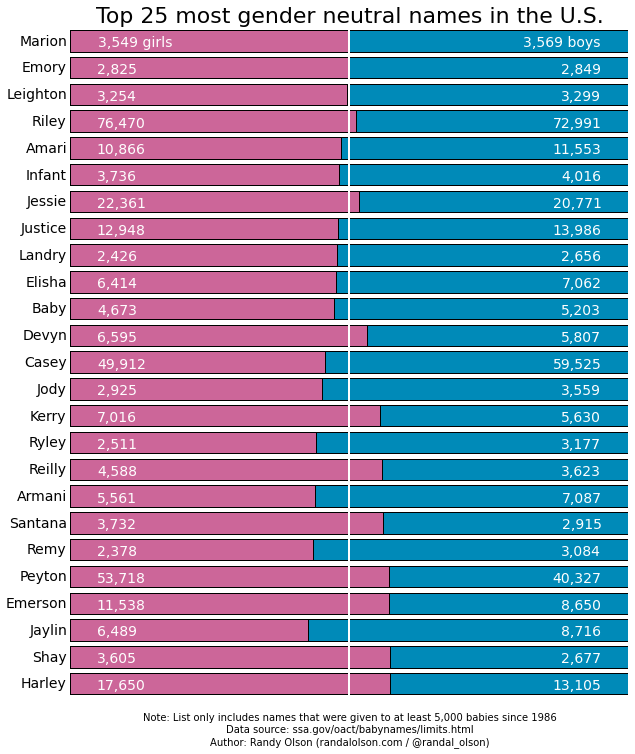 Disappointingly, Pat doesn't even come close to the top 25. If we take how America names their babies as any indication of what Pat's gender was, only 11% of all babies named Pat in the last 30 years were female. America's parents have voted: Pat is a boy's name!

Who names their child Infant or Baby?! The most likely explanation is that these are placeholder names until the parents/guardians can agree on a name.

Apparently Justice is blind when it comes to gender.

I feel bad for the 7,000+ boys named Elisha. At least there aren't many boys named Sue any more: 92% of all babies named Sue were female.

Want to explore some more baby names on your own? Head on over to the Baby Name Explorer.

Can you think of any more names that should be on this list? List 'em in the comments below.