What caused the upsurge of unique American baby names in the 1970s?

Last week, I was exploring the ever-popular U.S. baby names data set and noticed a peculiar trend: The number of unique baby names has continued to rise dramatically for the last ~130 years -- with the exception of the past few years, of course. 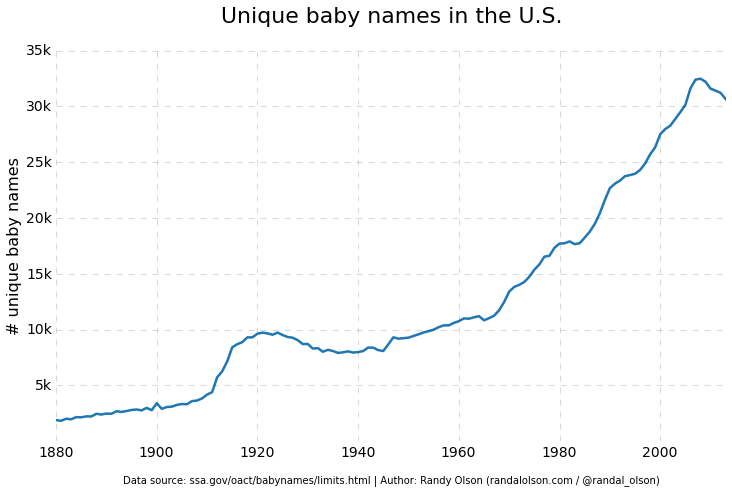 This observation could of course be explained by an increasing number of babies being born as time goes on. To account for that possibility, I plotted the unique number of baby names per 100,000 babies born. 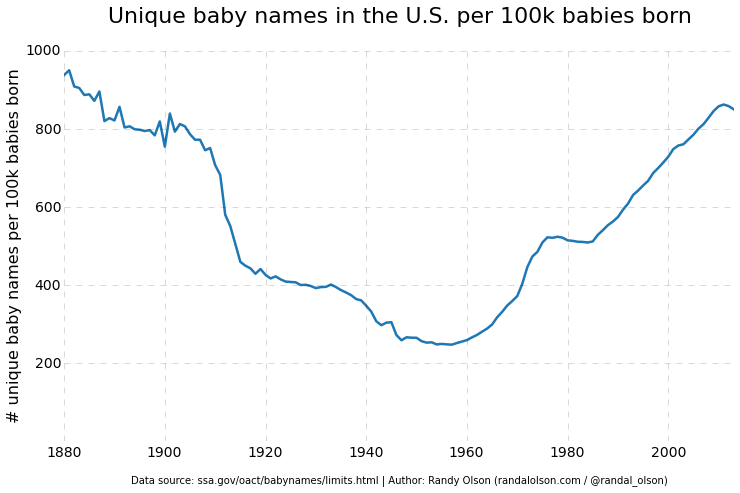 The 1880s had the most uniquely named babies, whereas the following generations saw a marked decline in distinctive baby names until the 1960s. It's possible that WWI followed by the Great Depression followed by WWII caused Americans to care less about giving their baby a distinctive name and more about keeping food on the table until next week. Whatever was the cause of the Great Baby Name Depression, it resulted in Baby Boomers being the least uniquely named generation in U.S. history.

These charts can lead into a dozen different stories, but today I want to focus on only one story: What caused the upsurge of unique American baby names in the 1970s?

During my search to find an answer, I ran across an interesting Freakonomics piece exploring whether a baby's name can predict their long-term income. During the discussion of the piece, a possible answer suddenly revealed itself: the Black Power movement of the 1960s and 70s.

This is the twenty-seventh time I have been arrested and I ain't going to jail no more! The only way we gonna stop them white men from whuppin' us is to take over. What we gonna start sayin' now is Black Power!

During this time, we began to see the rise of Arabic/Islamic names in the U.S.: 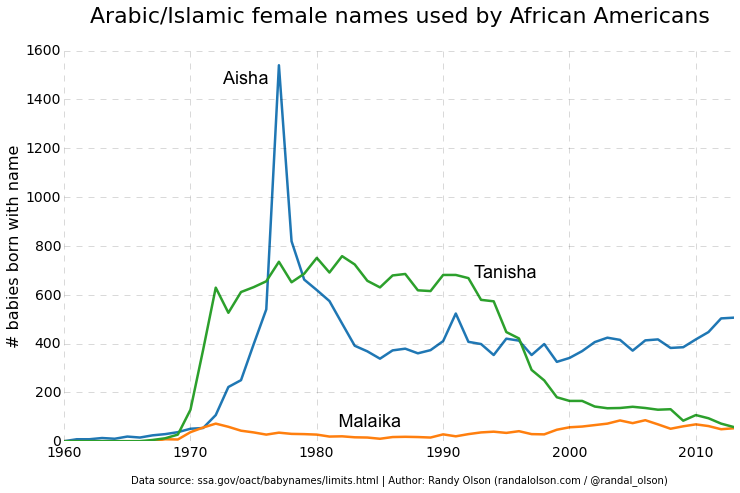 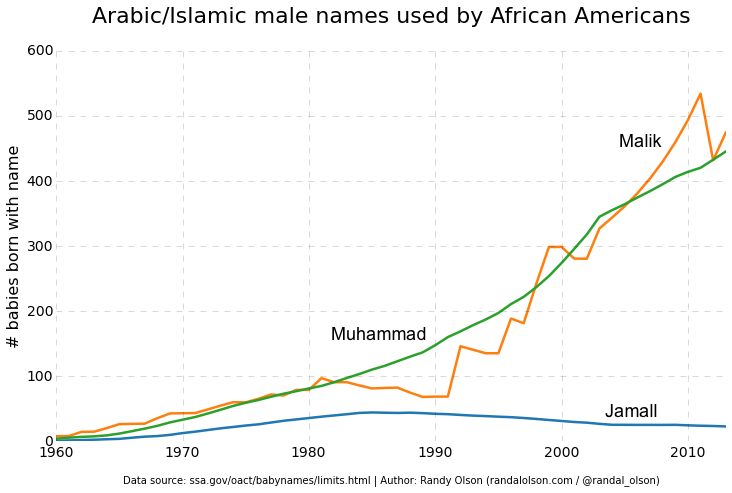 (Note: The above name frequencies could be confounded with the fact that immigration was also on the rise from the 1970s onward; these aren't exclusively names given to African-American babies.)

African-Americans also began to create their own names, later termed "inventive names." Prefixes such as La/Le, Da/De, Ra/Re, or Ja/Je and suffixes such as -ique/iqua, -isha, and -aun/-awn became common during this time. 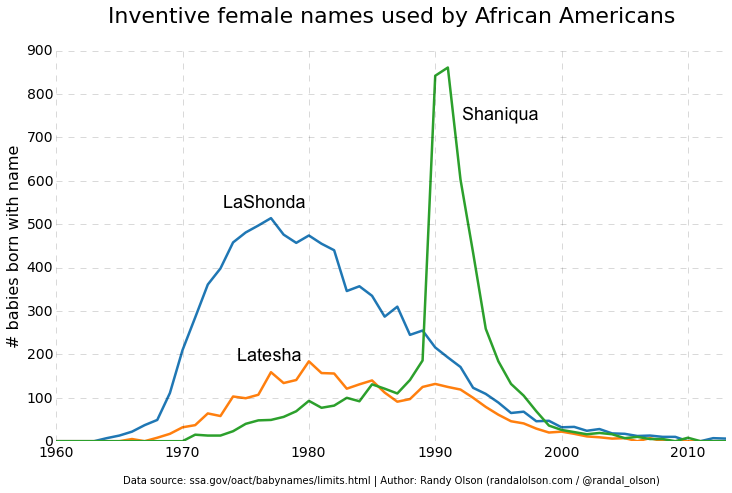 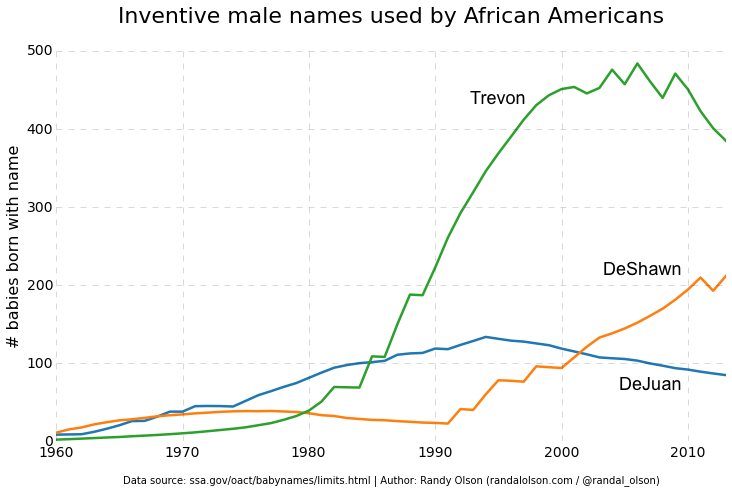 African-Americans even began adopting vocabulary terms as names for their children, a trend which still survives to this day. 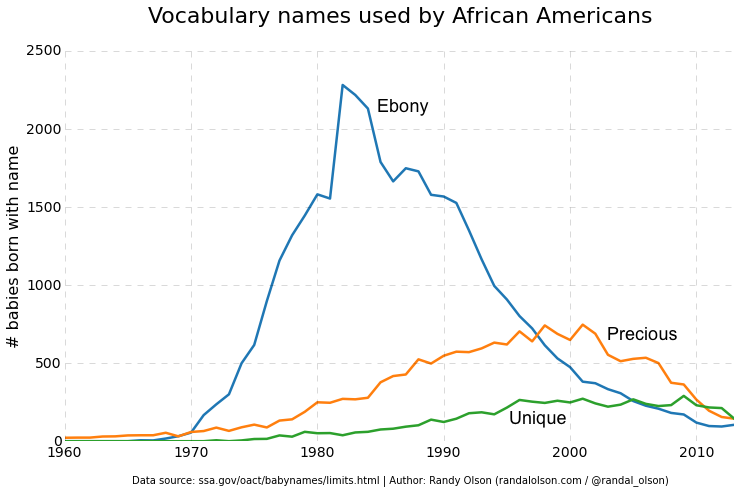 Do my findings explain the continued rise of distinctive baby names in the 1980s and beyond? Certainly not. Immigration -- especially from Hispanic countries -- has undoubtedly played a huge role in the baby name landscape. There have also been several other "unique name" movements within the U.S. -- for example the recent "-Ayden" movement -- that are clearly visible in the historical record. But those are stories for next time.

Want to explore some more baby names on your own? Head on over to the Baby Name Explorer.