The Shrinking Battleground: Every 4 years, fewer states determine the outcome of the Presidential election

Every 4 years, Americans are tasked to elect the leader of one of the largest democratic nations in the world. Eager to have their voices heard, U.S. citizens from every state stand in line to cast their ballot for their favorite candidate. Yet, according to a research project spanning over a decade, many states have already selected their candidate long before a single ballot is cast.

According to this project, an increasing number of states are consistently voting Democratic or Republican in every Presidential election. Below, I've broken down the states by how predictable they are over a period of 6 elections. A "Safe State" is a state that has a strong bias toward one political party (55% or more of the voting population favoring one party), whereas a "Swing State" has no such bias and could go either way. 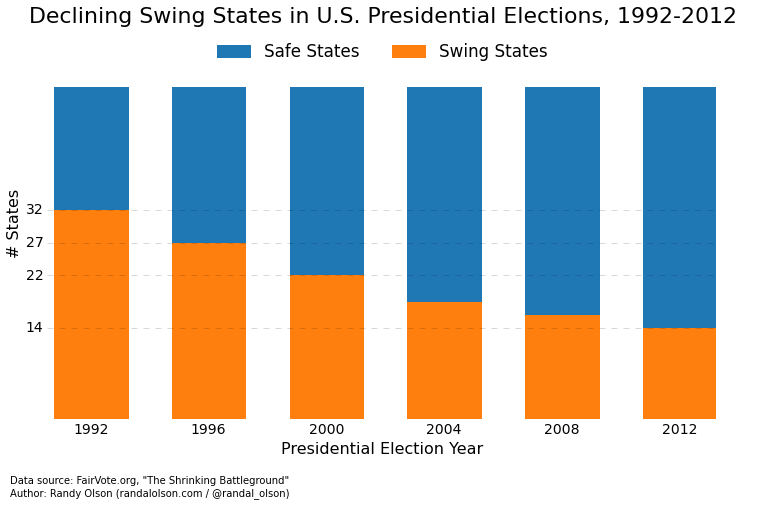 There has been a clear trend of declining swing states for the past 20 years: Nearly 2/3 of the states could've swung to either party in 1992, whereas only 14 of those states remained unpredictable in the 2012 Presidential election.

Thanks to the winner-takes-all voting system in the U.S., if the majority of voters in a state vote for one candidate, that candidate receives all of the state's electoral votes regardless of how close the popular vote was. In essence, the winner-takes-all system all but guarantees 2/3 of the states' electoral votes to the political parties, so the only real competition in the Presidential election is in the few remaining swing states.

Swing states and strongholds in the U.S.

I was curious how the landscape of swing and safe states has looked over time, so I mapped the states below according to how many elections in a row they've voted for one party. 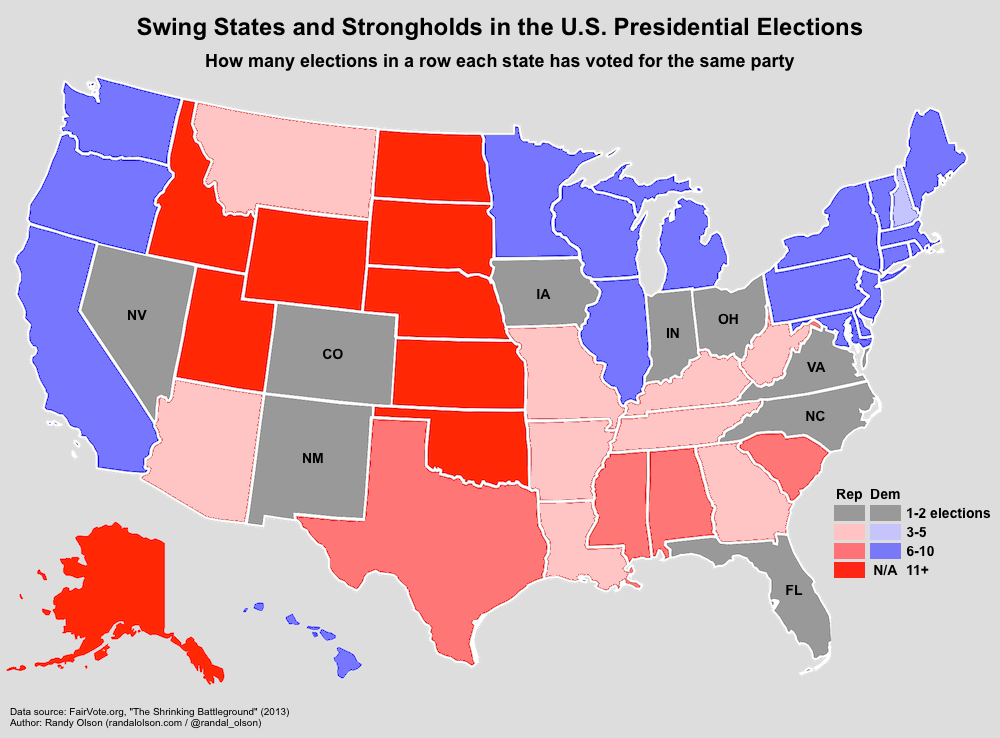 This map handily shows the recent evolution of the American political landscape. The Mountain States and Alaska have long been a bastion of support for the Republican party, with the majority of them voting Republican for 11 or more Presidential elections in a row. The South is a more recent Republican acquisition, with most Southern states voting Republican in only the last 3-5 elections. On the other end of the political spectrum, the Northeast, Midwest, Western states, and Hawaii have remained strong supporters of the Democratic party for at least the past 6 elections.

With most of the states (+ D.C.) basically carved out among the political parties, that leaves a measly 9 states that haven't consistently voted for one party for more than 2 Presidential elections.

The tragedy of this situation is that -- in states where the outcome is all but decided -- the winner-takes-all system nullifies people's votes if they don't support the majority party in their state. Voting Democratic in Alaska is about as pointless as voting Republican in California, which is why so many voters don't bother showing up to the polls in these staunchly polarized states.

Presidential campaign trails show us the states that matter 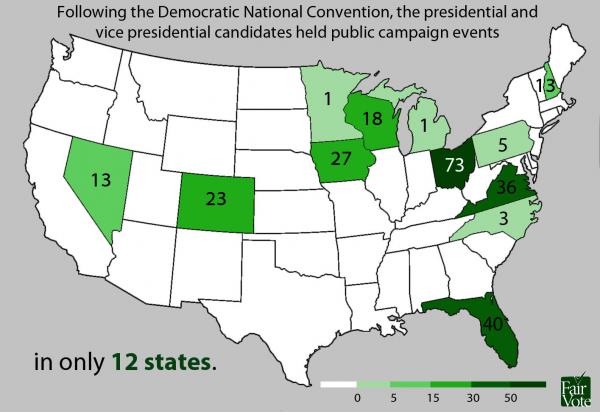 If you compare this map to the "Swing States and Strongholds" map above, you'll find that there's a near-perfect overlap. Ohio, Florida, Virginia, Iowa, and Colorado -- fairly well-known swing states nowadays -- receive a huge amount of attention from the Presidential candidates, whereas most of the other states are lucky to see the candidates in a political ad. FairVote's Presidential Tracker also shows the breakdown of ad spending in the 2012 election, which unsurprisingly falls in the same states.

How can I make my vote count?

If you live in a safe state, then it's in your best interest to see the winner-takes-all system done away with. As with all problems on a national scale, there's no easy solution. But FairVote seems to have a reasonable solution: Let's move to a National Popular Vote.