It's fairly common knowledge that comedy isn't a terribly lucrative career. Not only do most comedians spend decades doing small-time standup hoping to be discovered, but most of those comedians never end up being discovered either. But what about the comedians that did hit it big? To provide some insight into what it takes to be a successful -- and rich -- comedian, I charted the top 25 richest living comedians below. 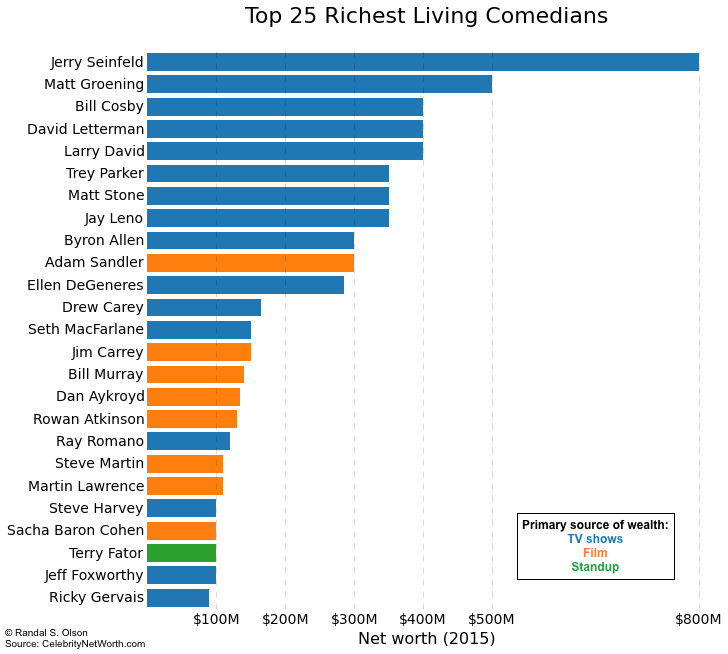 The first thing you'll notice is that only one comedian made it into the top 25 by doing standup. Terry Fator, the lovable ventriloquist who won America's Got Talent in 2007. After winning America's Got Talent, Fator went on to land a series of lucrative gigs in Las Vegas and earned himself standup contracts worth millions.

The rest of the comedians made their millions either by writing for TV shows or starring in TV shows and film. Perhaps the biggest success story on this list is the TV show Seinfeld, which made Jerry Seinfeld and co-writer Larry David rich beyond imagination when it was sold into syndication. Matt Groening (The Simpsons & Futurama), Trey Parker/Matt Stone (South Park), and Seth MacFarlane (Family Guy & American Dad) also pack this list with wildly successful comedy cartoon shows, showing us just how profitable running a TV show is nowadays. Then there's the late night comedy show hosts -- David Letterman and Jay Leno -- who rake in absurd salaries for making us laugh every night. (David Letterman brings in $20 million per year!)

Not to be forgotten are the comedy film producers and actors such as Adam Sandler, Jim Carrey, and Bill Murray. Adam Sandler has been the most successful comedian in the film business, banking over $62 million from the film Anger Management alone. It's no wonder Sandler keeps pumping out new films every year even while his ratings are dropping.

So, what can we take from this list? It looks like landing a comedy TV show on a major network is the true gold mine for comedians. Standup acts, for the most part, aren't where the real money is, but they're a great way to get your name out there when you're just getting started.