For the past 7 years, I've been a fan of MMA, and especially the larger Ultimate Fighting Championship events that take place around the world. For the uninitiated, MMA fights pit two professional fighters against each other who often have very different fighting styles, which leads to some exciting and often unexpected conclusions. See below for an example.

Earlier today, I ran across a data set containing all of the UFC fighters and fights that have occurred from the beginning of the UFC in 1993 to 2016. I couldn't help but spend a few hours looking for trends in the data set, which I've shared below.

UFC fights are lasting significantly longer than they used to. Back in the early days, fights would last only a few minutes on average, regularly ending in savage knockouts that attracted so many of the early UFC fans. 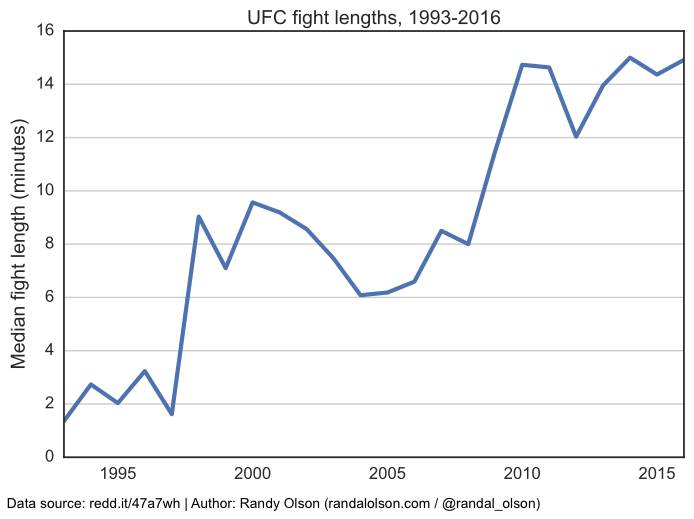 In fact, one of the shortest fights in UFC history took place in 1996, when Don "The Predator" Frye knocked out Thomas Ramirez in 8 seconds, prematurely ending the super heavyweight's career that night.

In many ways, the increased fight lengths were due to stricter regulations forced on the UFC. In the late 90's, the UFC was forced to enact safety regulations, 5-minute rounds, and weight classes, which is immediately noticeable in the data. Fight times only continued to rise from there, averaging about 15 minutes now in 2016.

Far more UFC fights are decided by the judges

Even though it was the knockouts that attracted so many early fans, the large majority of the early fights ended in submissions like the armbar. After the UFC reforms in the late 1990s, fights were forced to end after three 5-minute rounds (five rounds for title matches), and the winner would be chosen by a committee of judges based on their performance in the fight.

Nowadays, half of all fights run the full 15 minutes and go to decision, which is really a testament to the improved safety regulations. Interestingly, despite the rule changes, KO and TKO rates haven't changed much over the years. 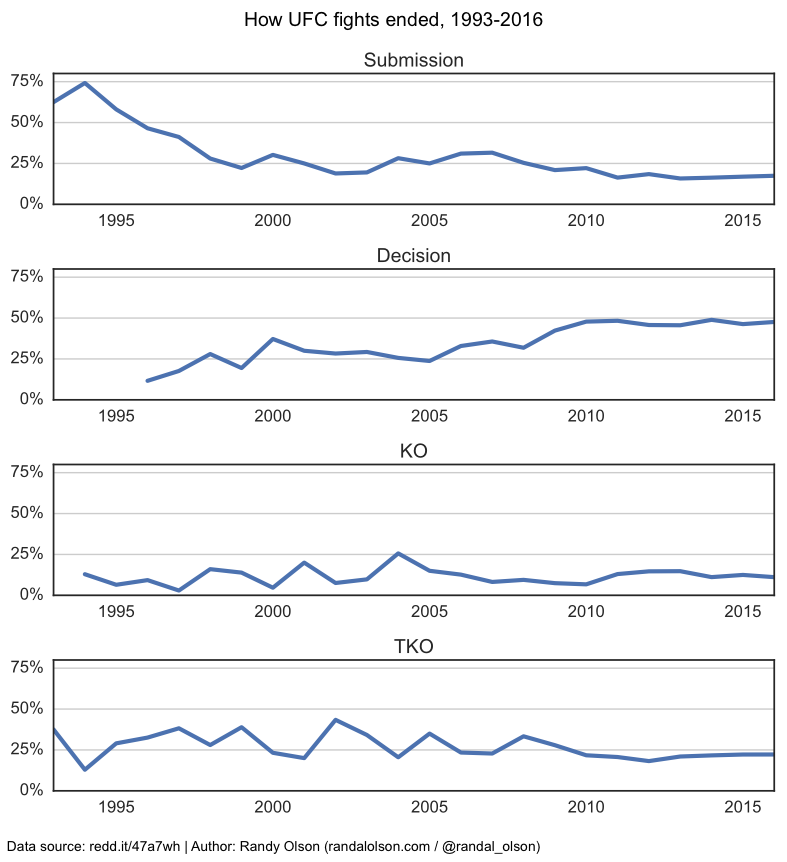 Submissions aren't nearly as common nowadays, but fighters like Ronda Rousey are infamous for their brutally efficient armbars.

UFC fighters are getting smaller

In the early days of UFC, many of the fights were all about massive men duking it out in the ring. In fact, one of the earliest UFC events was titled "David vs. Goliath" because it featured several fights where heavyweight fighters were matched up against much smaller fighters. (You might be surprised how many of those fights turned out!) Once the new rules were put in place in the late 1990s, the super heavyweight class practically disappeared and the heavyweight class has been on the way out ever since. 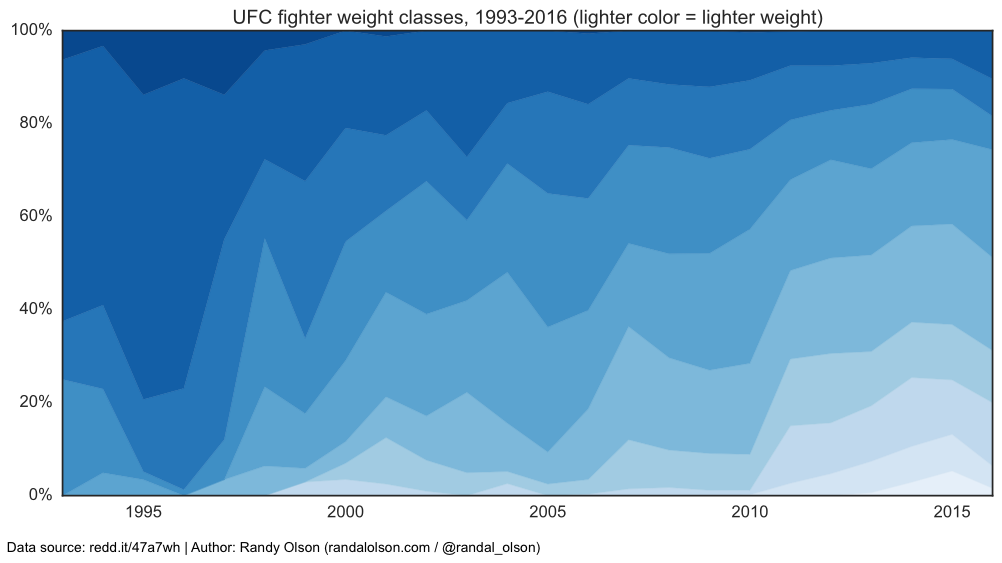 Here's another view of the same data, this time as small multiples. Same trends, different view: The hulking beasts of the early days subsided in favor of nimbler fighters nowadays. UFC has continually had to add new, lighter weight classes to accommodate the ever-shrinking waistlines of their fighters, especially with the introduction of the female UFC fighters in 2012. 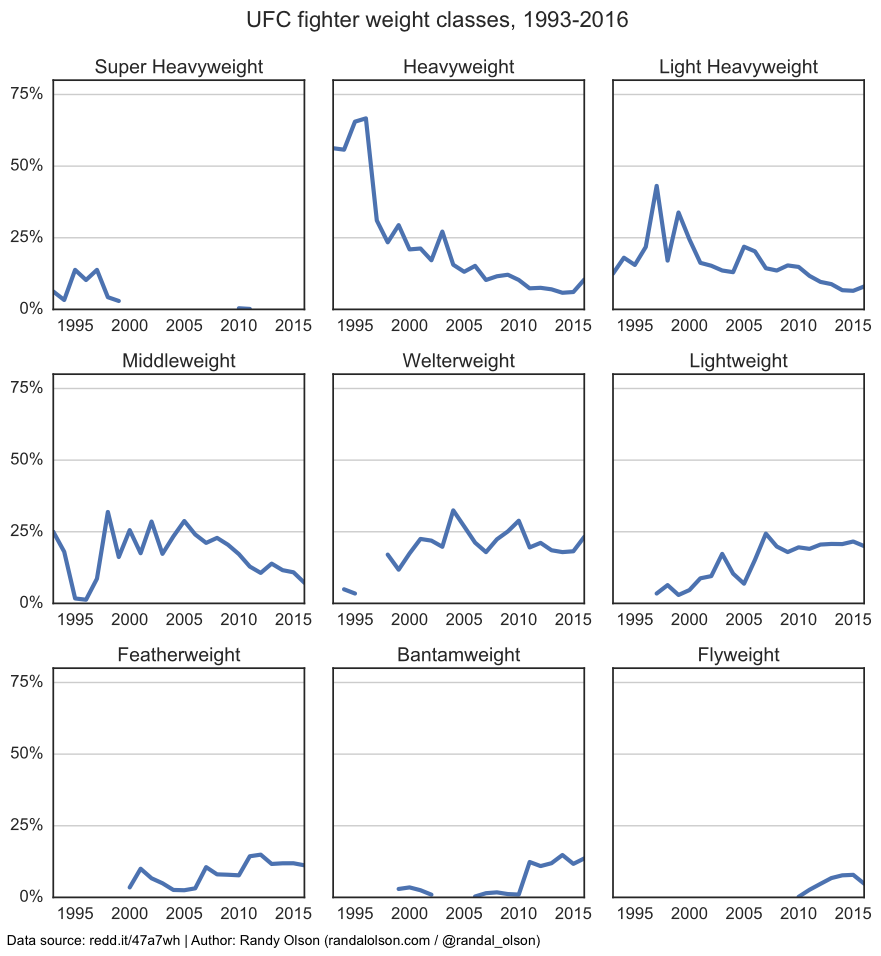 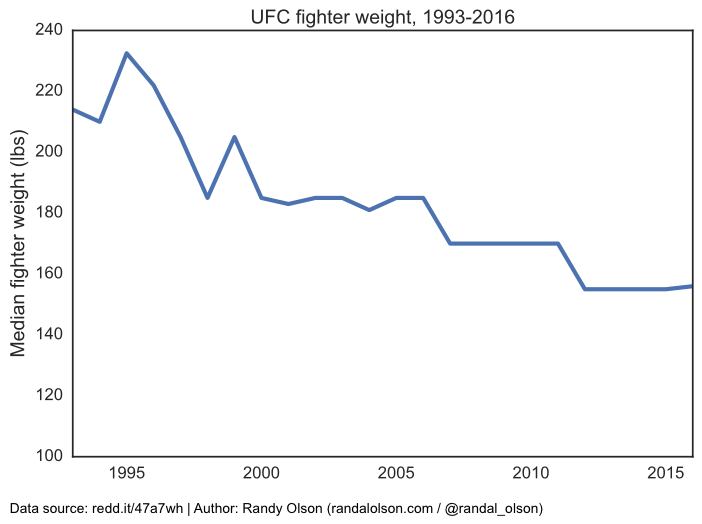 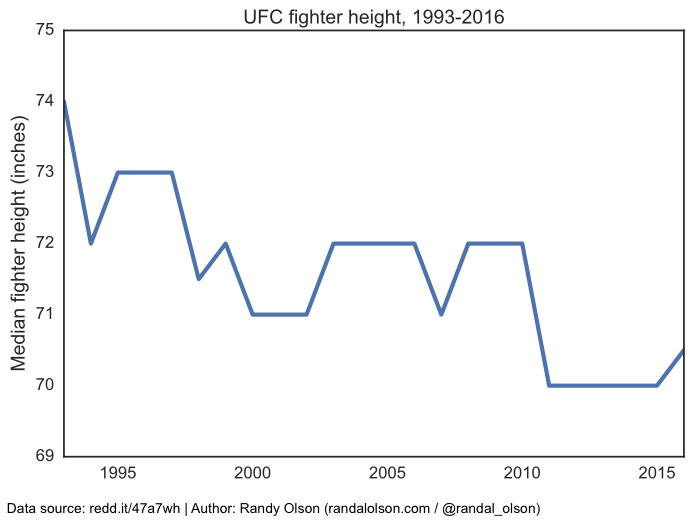 Despite the ever-shrinking fighters, UFC fights are no less exciting than they used to be. In fact, Carla Esparza -- standing at only 5'1" (1.55m) -- holds the honor as one of the best fighters in the UFC strawweight class, and it sure shows in the ring.

If you'd like to explore the data yourself, head on over to the Reddit thread and give it a gander.