What data visualization tools do /r/DataIsBeautiful OC creators use?

One of the most common questions that newcomers to data [science/visualization/analysis] ask is: "What tools should I use to create data visualizations?" While I always recommend learning design principles before tools, I thought I'd take a stab at answering that question by analyzing what tools the /r/DataIsBeautiful community uses. 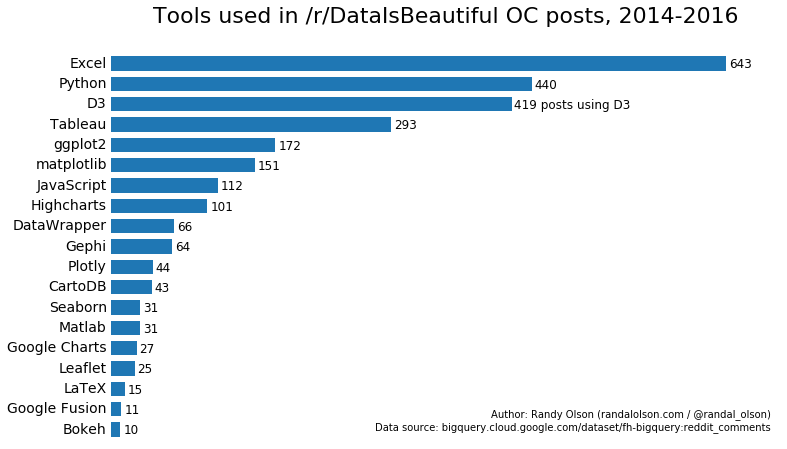 (Unfortunately, it was difficult to parse out mentions of the "R" language with the n-gram analysis, so we'll have to use ggplot2 as a proxy.)

The most popular tools on /r/DataIsBeautiful are:

As expected, Excel dominates the list as the primary tool that most beginners use: In this case, there have been at least 643 OC data visualizations on /r/DataIsBeautiful that were made with Excel. Excel is a great tool to start with, but you should eventually move on to more advanced tools that allow you to programmatically generate visualizations such as matplotlib/Seaborn, D3.js, or ggplot2. If programming isn't your forte, Tableau is a much better option than Excel.

Here's descriptions for the rest of the tools:

I was also curious about temporal trends in library usage, so I grouped the tool mentions by year and plotted them below. 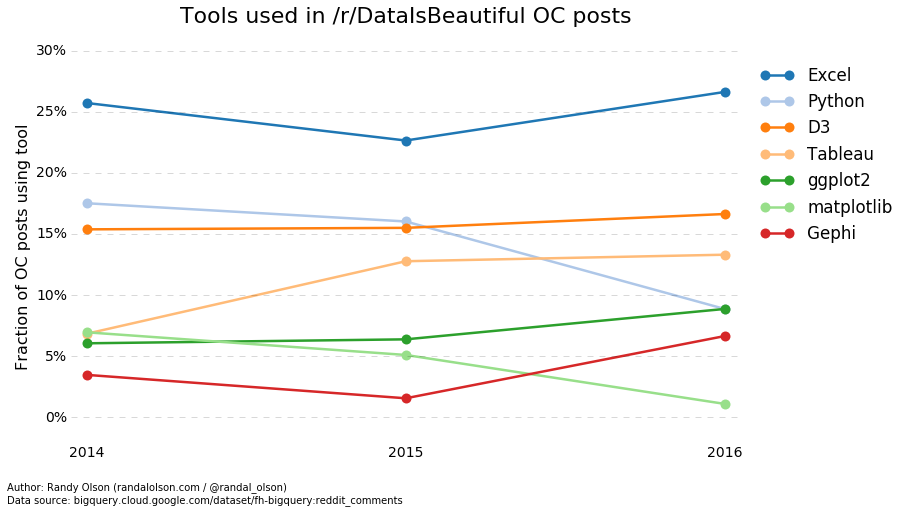 GUI-based visualization tools such as Tableau and Gephi are seeing steady growth, whereas Python and matplotlib (oddly) seem to be waning in relative popularity. D3.js and ggplot2 are similarly experiencing steady growth, although I should note that 2016's counts are only based on January 2016's comments and may change by the end of the year. We'll have to revisit these trends come 2017.

Hopefully that answers all of your data visualization tool-related questions! If you have any more questions or concerns, please leave them in the comments.

If you'd like to repeat this analysis yourself, run the following SQL statement on the Google BigQuery database.