The correct way to use pie charts

I believe that the reason so many people dislike pie charts is because they're so frequently misused by amateur practitioners. Furthermore, I believe that pie charts still play an important role in data visualization, and I'm going to make my case in favor of pie charts below. Along the way, I will explain the correct way to use pie charts; please take note and share this information with your colleagues so we can salvage the pie chart's reputation.

The advantages of pie charts

From my point of view, pie charts have two major advantages over their alternatives:

I will demonstrate these points with a few examples below. First, let's cover the three most common mistakes that designers make when using pie charts.

Make sure your parts sum to a meaningful whole

Say we're putting together a presentation for our boss and want to demonstrate the popularity of three programming languages as indicated by their Google search frequency. We make the pie chart below and move on with our slides.

What's wrong with this pie chart? 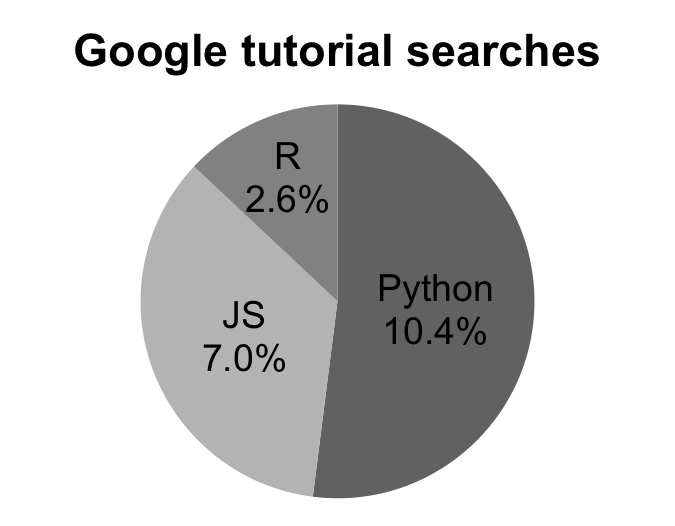 That's right: R, JavaScript, and Python don't represent every programming language out there, yet by making them the only "pieces of the pie," that's exactly what we're claiming! In other words, our parts don't sum to a meaningful whole that represents all Google searches for all programming languages. 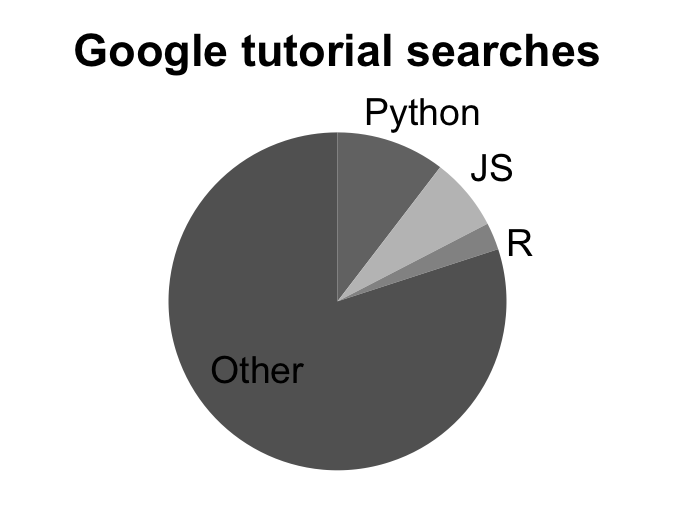 With the pie chart above, we can easily make the point that R, JavaScript, and Python together represent a little less than 1/4 of all Google searches for programming languages.

What's wrong with this pie chart?

Right again! We went overboard and showed way too many categories at once. Pie charts are not designed to communicate multiple proportions, so we should collapse our categories down to only a handful that really matter -- 3 or fewer is the general rule of thumb.

This is where we really have to think about the message that we want to communicate with this pie chart. Do we really want to show all of the programming languages, or do we want to only focus on a few of them? In this case, we decide that we really only care about Java, PHP, and Python, and collapse the other categories into an "Other" column. 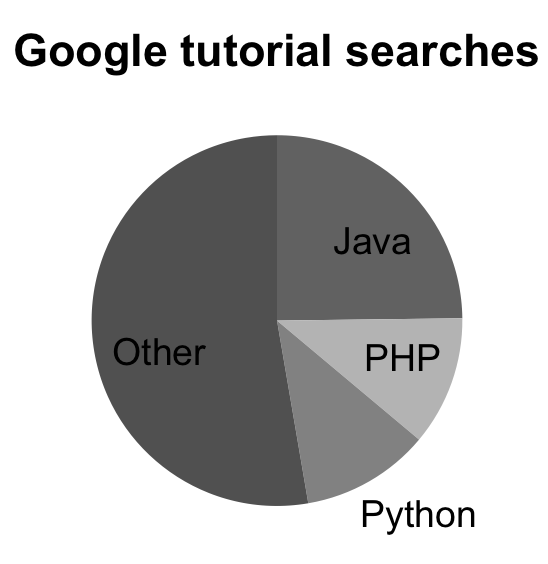 Now we have a very clear message with our pie chart: Java, PHP, and Python together represent nearly 1/2 of all Google searches for programming languages, and Java represents roughly 1/4 of all searches alone.

Note that we shouldn't try to use the pie chart to compare between Java, PHP, or Python: Pie slices are notoriously difficult to compare directly, especially if we ask our uncle who always takes the bigger slice of pumpkin pie during Thanksgiving dinner. If we want to compare the proportions, then we should use a bar chart instead.

Always start your pie charts at the top

One final note: Our readers will typically start reading our pie charts from the top of the circle -- the 0‎° mark. We should never violate our readers' expectations by starting the parts at any other section of the circle, even if it makes the pie chart look like Pac-Man. 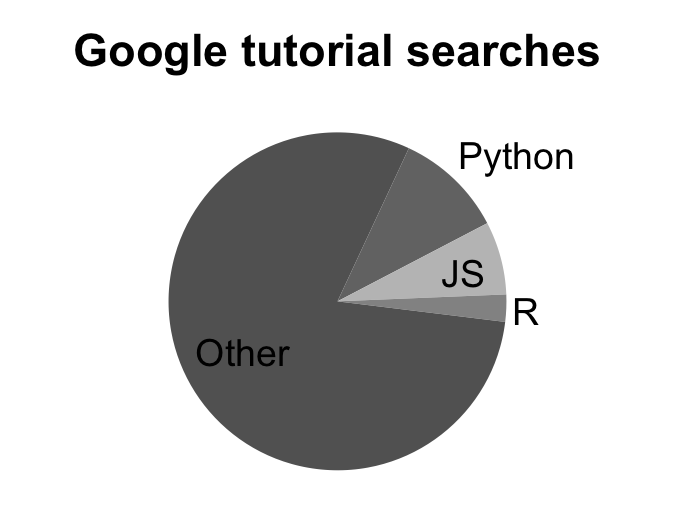 Fortunately, most data visualization software starts pie charts at the 0‎° mark. But in case you find software that doesn't: you've been warned!

If you liked what you saw in this post and want to learn more about data visualization, come take a look at my Python data visualization video course that I made in collaboration with O'Reilly. In just one hour, I will cover these topics and much more, which will provide you with a strong starting point for your career in data visualization.