Over the weekend, I discovered a web site where a group of dedicated film fanatics have been systematically counting on-screen deaths in various films for several years. I immediately set out to scrape all of the data from their web site and forums so I could visualize it and see what we could learn. I posted the data online to save everyone else the chore of repeating the scrape.

Below is the first in a series of visualizations I created, showing the top 25 deadliest films by on-screen death counts. If you would like to feature any of these visualizations on your own web site, please contact me first. 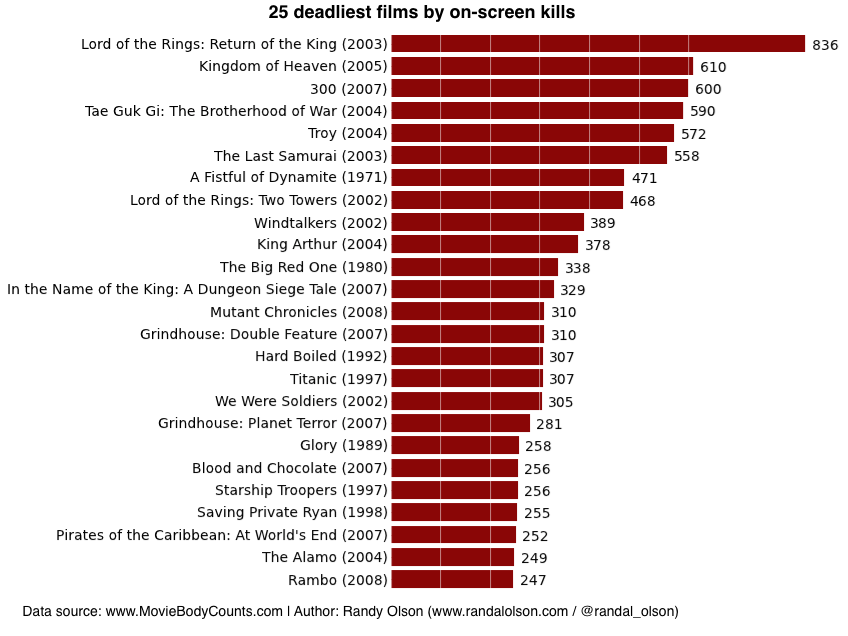 Despite being rated PG-13, Lord of the Rings: Return of the King has the most on-camera deaths in a movie in all time.

Despite its claim to fame as being the bloodiest film of all time, Hot Shots Part Deux ranked in with only 114 on-screen kills.

Orlando Bloom is in 4 of the top 8 deadliest films of all time.

This visualization has made its way around the internet. Here's some common questions I heard asked about it.

What about movies where a building/airplane/planet/death star exploded? That counts for hundreds/thousands/millions of on-screen deaths.

The web site I took the data from only counts visible, on-screen deaths. Implied deaths, such as an entire planet exploding, are not counted.

A movie I know of is missing that definitely has at least (large number) of deaths in it.

The folks gathering the data have counted most of the movies with high kill counts. Although they have been at it for several years, this is by no means a comprehensive list. If you're willing to do a body count for the movie, awesome! Check their kill counting guidelines and post a report on their forums.

I don't believe the body count for one of the movies.

You can go to the data source's Movie Index and double-check the counts for yourself. They provide a scene-by-scene breakdown.

No. The movie did not show all 300 Spartans dying, and there were several implied deaths on the Persian's side.