Top 25 most violence packed films of all time

Over the weekend, I discovered a web site where a group of dedicated film fanatics have been systematically counting on-screen deaths in various films for several years. I immediately set out to scrape all of the data from their web site and forums so I could visualize it and see what we could learn. I posted the data online to save everyone else the chore of repeating the scrape.

Below is the third in a series of visualizations I created, showing the top 25 most violence packed films ordered by on-screen deaths per minute. If you would like to feature any of these visualizations on your own web site, please contact me first. 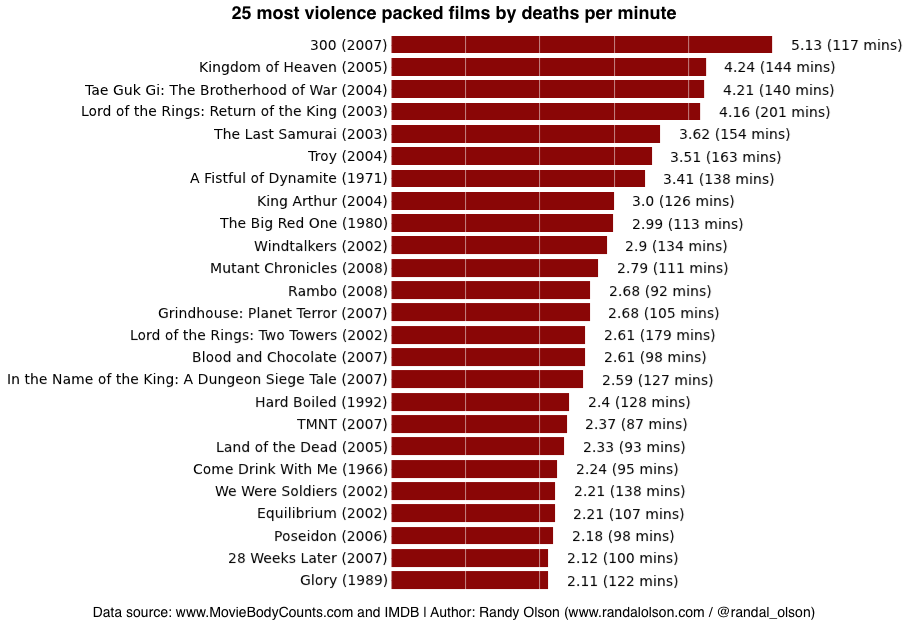 Only 39 Spartans were shown dead or dying in the movie "300." That means "300" shows 4.79 dead or dying Persians per minute. Even if the Spartans kept up the killing at that rate 24/7, they would've taken at least 2 weeks to wipe out the entire Persian army.

Most of the on-screen deaths in Lord of the Rings: Return of the King happen in the relatively short Battle of the Pelennor Fields:

Rambo (2008) started the carnage as early as possible with several villagers being gunned down only 3 minutes into the movie.