Earlier this month, The Chronicle of Higher Education released an article claiming that student enrollment is partly to blame for rising college costs. I was a little skeptical at first, largely because I'd seen some damning evidence showing that recent state funding cuts were the real culprit. I figured since I have the IPEDS Delta Cost Project Database on hand, I might as well take a look for myself and see what the numbers say. The results were pretty eye-opening. 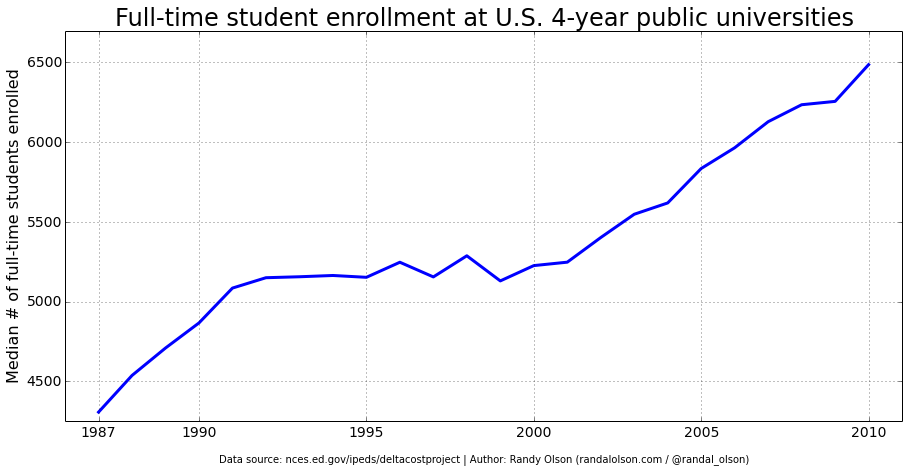 U.S. student enrollment has been skyrocketing in the past decade.[/caption]

What news outlets typically claim lately is that state funding to these public universities has been steadily declining in the past decade, and that these cuts have been the reason we've seen tuition costs rising so rapidly. Their argument isn't entirely incorrect: The average 4-year public university has had its state funding cut significantly in the past decade, especially since the recession in 2008. Michigan State University saw its state budget cut from about $520 million in 2000 to about $380 million in 2010 -- a tremendous cut by anyone's standards. (Note: dollar amounts were adjusted for inflation to 2014 dollars.) 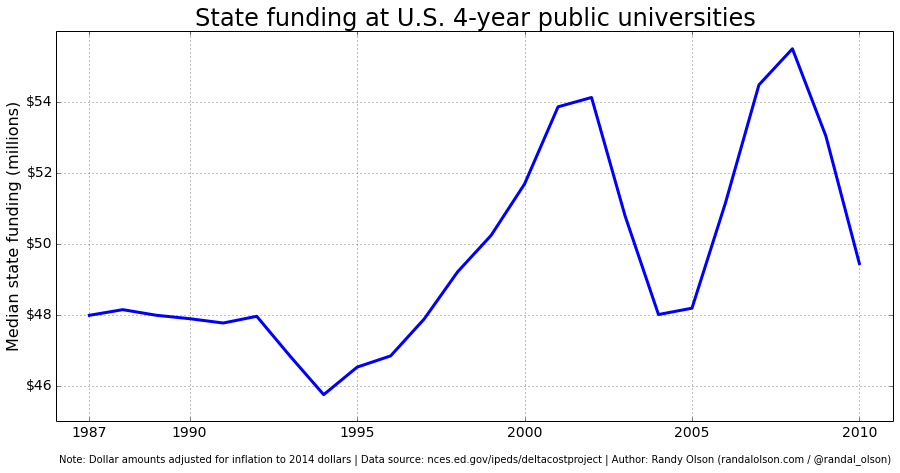 U.S. state funding for 4-year public universities has been steadily declining since 2008.[/caption]

The answer, of course, is where we started: Student enrollment. If we divide the average 4-year public university's state funding by its enrollment, we get the chart below. Skyrocketing student enrollment has made it so universities have to teach an ever-increasing number of students with an ever-shrinking budget. What's worse is that we're currently at a stage where public universities are receiving the least amount of state funding per student in the past 2+ decades. Faced with the decision to cut spending and deliver lower quality education to more students, or increase tuition and maintain the quality of higher education, it's no wonder that university administrators chose the latter. 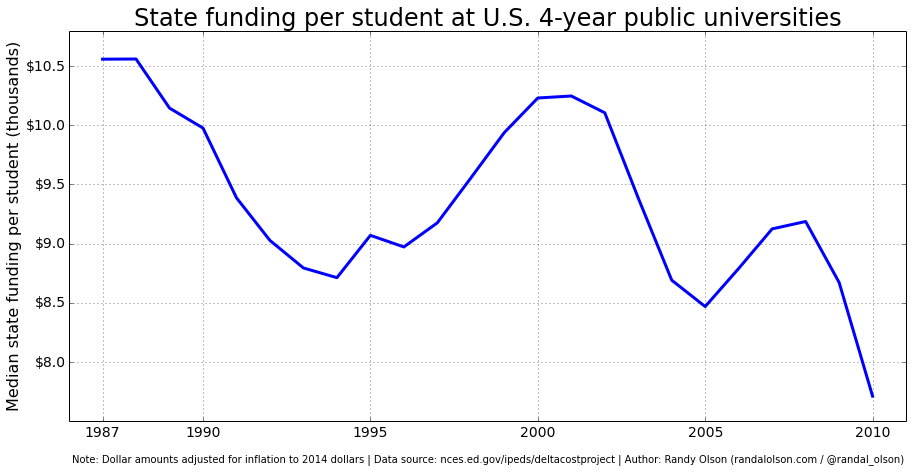 U.S. state funding per student for 4-year public universities has been steadily declining since 2008.[/caption]

Now, I'd like to reiterate one of my points from my previous posts: College isn't for everyone.

We've been selling too many high school students on this New American Dream: If you work long and hard enough, and if you sacrifice enough, you will eventually graduate college without debt and land your dream job. Instead, students are graduating with an ever-increasing amount of debt and finding it hard to find a job related to their degree. Even worse, by encouraging more and more students to go to college, we're exacerbating the college debt crisis and making college more expensive for everyone.