Recently, I've been working my way through Daniel Kahneman's fascinating book on human decision making, "Thinking, Fast and Slow." In the third chapter, Kahneman discusses how external factors can affect our tendency to fall back on easy "default" decisions instead of taking a few minutes to think the decision through. To drive his point home, he provides one disturbing example from a research article published in PNAS a few years ago.

In this article, the researchers analyzed 8 experienced judge's decisions on parole requests as a function of time of day. The judges reviewed about 35 cases per day, spending about 6 minutes on each case. On average, the judges approved only 36% of the parole requests presented to them each day, so the chances of having a positive judgement on your case are already bleak.

Now, we'd expect judges -- of all people -- to be the best at making impartial decisions. If no external factors were affecting their decisions, we'd expect to see them consistently approving about 36% of the parole requests throughout the day.

Let's take a look at what the researchers found. 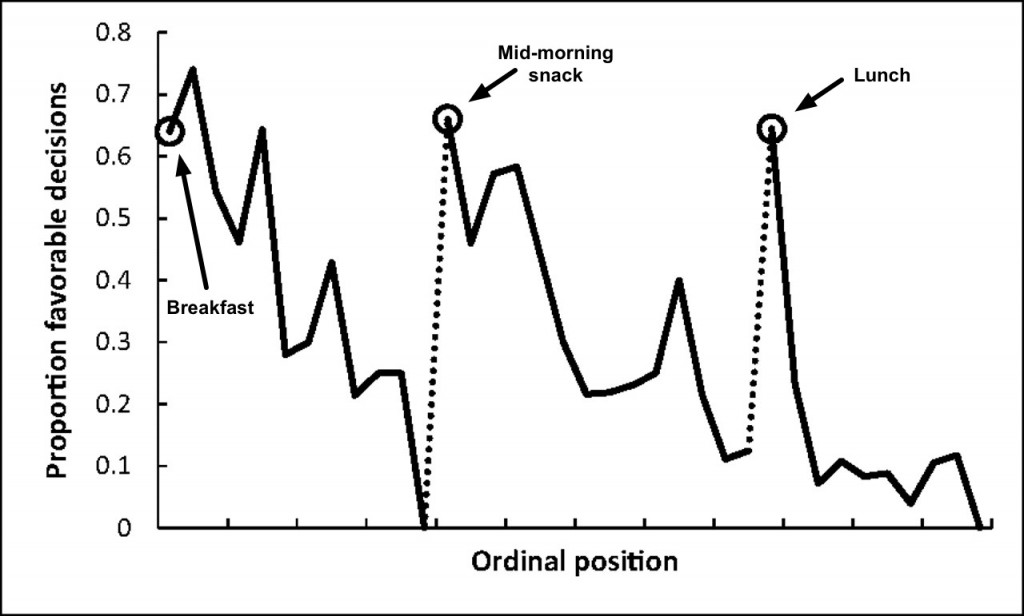 Proportion of parole requests approved as a function of what order they were reviewed in.
Each tick on the x-axis denotes every third case.
Circles denote when the judges took a food break. Source[/caption]

Shockingly, the judges appear to be much more inclined to approve a parole request when they've just come off a break. In contrast, they reject far more requests than usual the closer they get to break time -- and nearly 100% of the requests just before they take a break.

This study provides a classic example of depletion effects in human judgement, a theory which suggests that we have a limited amount of mental energy to expend during a working period. The longer we work on mentally strenuous tasks, the more mental energy we expend, and eventually we'll run out and start falling back to these easy -- and often wrong -- default decisions.

In the judges' case, once a sufficient number of cases had worn them down, they started defaulting to rejecting every case put in front of them until it was break time. That means that perfectly eligible prisoners had to spend even more time in prison because the judge hadn't eaten his mid-morning snack.

Yet more proof that humans don't make decisions in a vacuum: even missing breakfast can alter how you approach the day.