The age divide in where Americans want their tax dollars spent

With the U.S. Midterm Elections coming up, it's time again to rally your friends and family to fulfill their civic duty at the voting booths on November 4th. Considering the possibility that the Senate will flip parties, this will be a particularly important election to vote in.

Coincidentally, I've been working with the UT Energy Poll on their latest poll for the past month, and I've had the chance to preview the issues that Americans think are important in this upcoming election. This nationally representative poll asks Americans the question, "Where is it most important for the U.S. government to spend your tax dollars?," and they're given 8 options:

We then break the answers down by various categories such as gender, political affiliation, level of education, etc. to see where Americans differ -- and agree -- in opinion. One of the most striking disparities in opinion revealed itself when we looked at the responses by age: 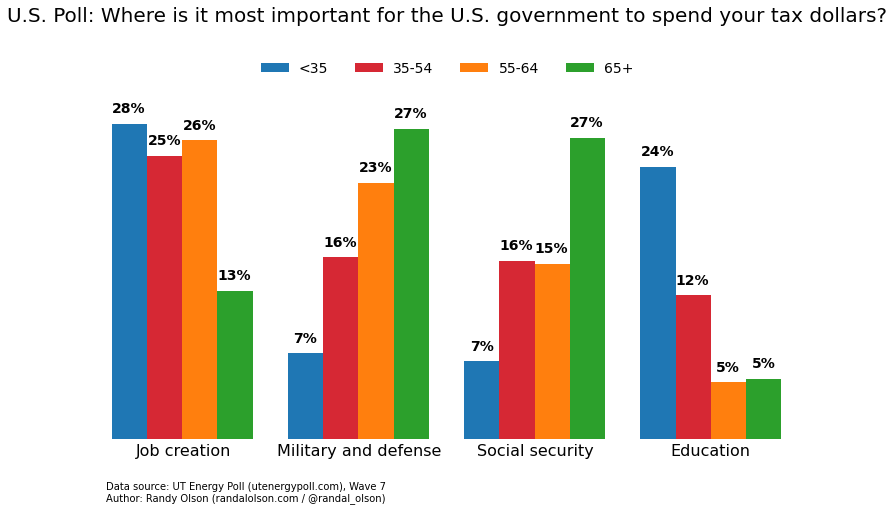 Percentages are the % of respondents in that age bracket

The divide in priorities between young and old Americans couldn't be clearer: Older Americans overwhelmingly want their tax dollars spent on Social Security, military, and defense, whereas younger millennials prefer to see their tax dollars invested in job creation and education.

This data adds to the pile of data demonstrating the growing divide between millennials and older generations. It seems that the millennial vs. older generation conflict reaches far beyond the working your way through college debate: millennials are tired of war-mongering in foreign countries and want to see those tax dollars invested at home instead, whereas their parents and grandparents are content to maintain the status quo as long as their own retirement is taken care of.

With the tendency for 65+ year olds to turn out to vote far more than younger Americans, this divide could spell serious trouble for millennials who are struggling to find a job and pay off their college debt. Add in the fact that nearly half of the Senate falls into the 65+ age category and it's really no wonder that millennials feel vastly underrepresented in politics.

Want to change the status quo? Get out to vote on November 4th.