Do women on OkCupid follow the Standard Creepiness Rule?

It seems that there's an XKCD comic for every life situation that we run in to.

One of my favorites, by far, is the comic titled "Dating pools."

If we plot the Standard Creepiness Rule out for women: 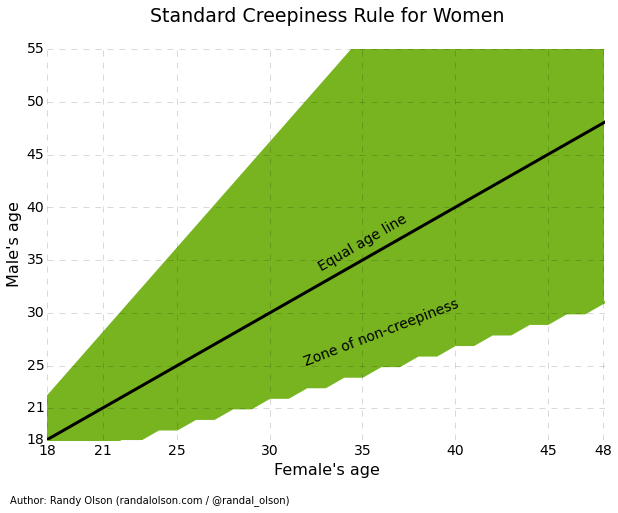 (Note that you can easily just change the axis labels in the above chart and it works just as well for men.)

It just so happens that Christian Rudder released his book Dataclysm last month, which features a chart showing us the age range that women search on OkCupid for when looking for men to date. One of my first thoughts when I saw this chart was: Do women on OkCupid follow the Standard Creepiness Rule?

Sure enough, if we overlay Rudder’s OkCupid data over the first chart, we see that women follow the rule almost exactly. There are a few spots in their teens and low-20s where women actually seek older men than the Standard Creepiness Rule says they should, but that trend quickly ends by the time they're 21.

It's interesting to note that in their younger years, women seek older men much more than younger men and refuse to date men more than a year younger than them. This trend ends around their mid-30s, when women suddenly become okay with dating men up to 5 years younger than them.

The most interesting trend reveals itself when you compare this chart to the male OkCupid user's chart: Whereas women tend to seek older men (in their younger years, at least), men are doing the exact opposite and seeking younger women. This results in an unfortunate situation for women as they age: During their younger years, they're highly sought after. But as they grow older, men's tendency to seek younger women leads to an ever-shrinking dating pool for older women. Check out Rudder's article on the topic to learn more.