A couple months ago, one redditor asked a simple question: "Is [reddit] karma experiencing inflation?" Of course, it's silly to think about inflation applying to upvotes because you can't buy anything with them. Nonetheless, it's interesting to find out whether an upvote on reddit is worth more or less nowadays than it did back in ye olden days of reddit.

If we think of upvotes as a currency, we first need to know how many are in circulation at any given point in time. After all, the more upvotes that are around, the less your individual upvotes count. Below, I've charted the total number of upvotes that reddit posts received every day between 2008-2013. (Note the log scale of the y-axis.) 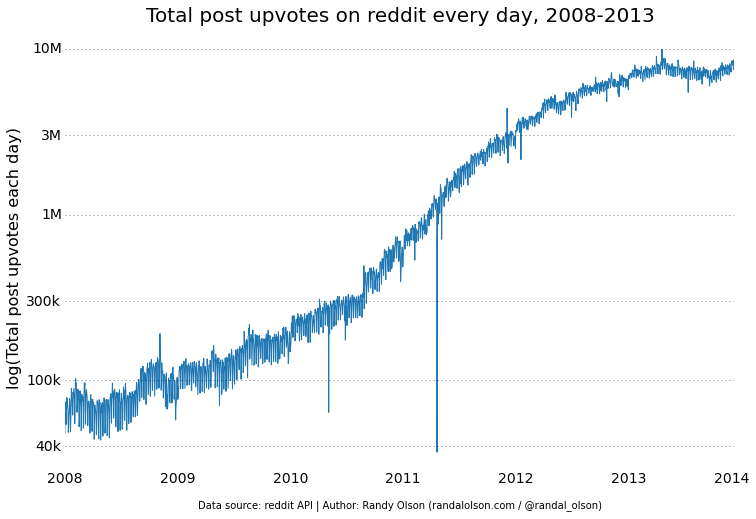 Shown above, reddit posts receive orders of magnitude more upvotes today than they did back in 2008. Whereas a paltry 80,000 upvotes were spread amongst posts every day in early 2008, nowadays the reddit servers process well over 8 million upvotes every day. To put that in perspective: On average, reddit users pressed the upvote button 96 times every second in 2013.

Essentially, this is what has been happening to the reddit servers:

Needless to say, reddit upvotes have experienced massive inflation since 2008: An upvote nowadays is worth 113x less than it did in early 2008. That means you need 113x more upvotes than in 2008 to even stand a chance of reaching the front page. That also means that the karma hounds of the early reddit days, such as /u/qgyh2, have the real bragging rights of amassing huge mounds of upvotes when it was really hard to get them.

Normally at this point I'd start making predictions about how much an upvote will be worth in the future, but there's actually been a strange trend starting in 2013: The total number of upvotes on reddit stagnated at about 8 million upvotes per day for all of 2013. Could this mean that reddit's upvote carrying capacity is about 8 million upvotes per day? If so, that's bad news for the multitude of posters than want their posts to be seen: As more and more users post links to reddit, an ever-growing percentage of them will go completely ignored. It should be telling to revisit this post next year to see if that trend held in 2014.

Earlier this year, I wrote an article looking at the most upvoted posts of all time on reddit. Since it was much harder to amass upvotes in 2008 than today, it's necessary adjust every post's upvote count for the "upvote inflation" we see above. Below, I've charted out the most-upvoted posts on reddit every day when their upvote counts are adjusted to December 2013 upvotes. 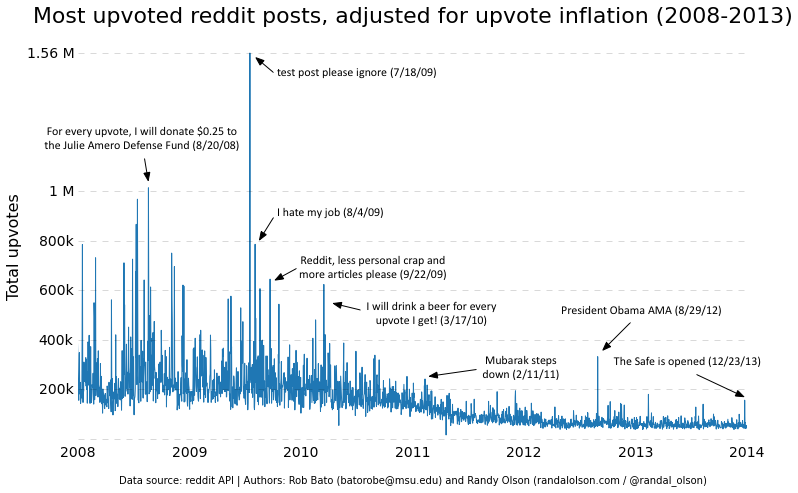 Interestingly, the most upvoted posts prior to mid-2011 garnered far more upvotes than posts today (relative to the total number of upvotes being given at the time). Perhaps the most extreme example is "test post please ignore", which amassed an incredible 1.56 million inflation-adjusted upvotes in July 2009.

Finally, here's the top 10 most-upvoted posts when their upvotes are adjusted for inflation:

(and now you see why "upvote if" threads have been banned by mods more-or-less site-wide.)