Around this time last year, I kicked off a series of movie analysis posts to wrap up the year. In keeping with tradition, I figured I'd do the same this year. This year, I'll be looking at box office sales in the U.S. with data from Box Office Mojo.

To kick things off, I thought it'd be interesting to look at the film studios that have brought in the most money from ticket sales in the past 30 years. It's fairly common to see lists of top-grossing films around the web, but it's much more rare to see the studios that are making bank off of them. 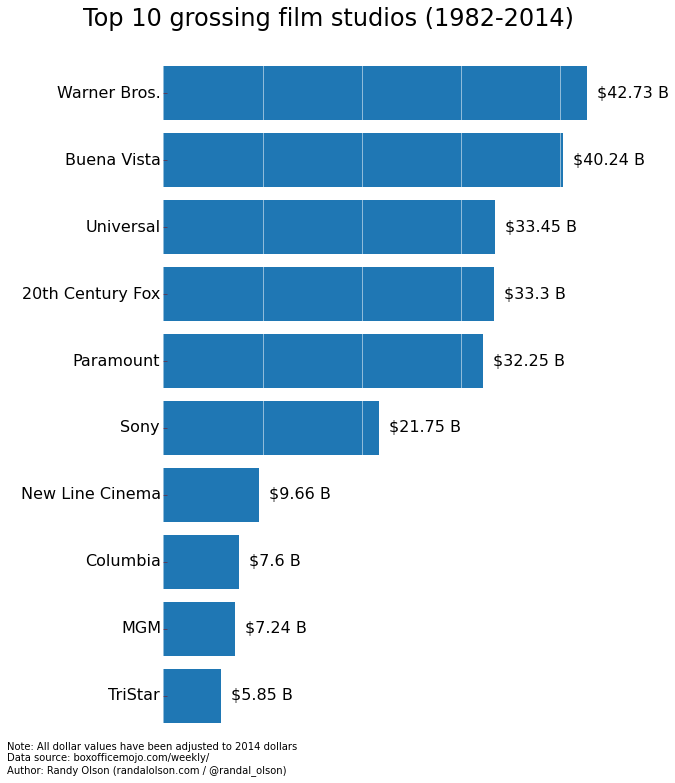 The two biggest moneymakers by far are Warner Brothers and Buena Vista. If Buena Vista doesn't sound familiar, maybe their more popular brand name will ring a bell: Disney! Whereas Warner Brothers has profited mostly off of successful franchises (The Dark Knight, Harry Potter, The Hobbit, and more), Buena Vista has mostly drawn its profits from a huge variety of animated films such as Frozen, Toy Story, and Up.

The line between the "have" and "have not" studios is drawn fairly clearly just after Sony, clearly explaining why these top 6 studios are referred to as the "big 6." Columbia and TriStar were merged into Sony in the early 2000s, and New Line Cinema was merged into Warner Brothers in 2008. The last independent film studio on this list -- MGM -- filed for bankruptcy in 2010, which hints at how tough it is to operate as a studio independent from the "big 6" nowadays.

Of course, ticket sales are only a fraction of the profits that these studios bring in. As any parent can attest, film studios have become very efficient at extracting money from us through other merchandise as well, such as action figures, video games, candies, and so much more.