Celebrating 2 years of research blogging by analyzing my blog

In May 2012, I started this blog to rave about the IPython Notebook, a new scientific computing tool that's still an integral part of my research workflow today. Two years have passed, and I've written about a breadth of topics ranging from statistics tutorials to science outreach to my PhD research to evolution to chess... and even the world's deadliest actors. This blog has proven to be an incredibly useful outlet for fleshing out ideas and projects that I never would've finished without it, and even better, it's connected me with hundreds of brilliant folks who have given me thoughtful feedback about my writing and projects.

Coincidentally, this blog's 2nd birthday was also marked by another milestone: It just hit 1,000,000 pageviews! Given this site's recent reputation as a data analysis blog, I figure the only appropriate way to celebrate its birthday is to analyze the blog itself and how it reached this milestone. Without further adieu...

Where did all that traffic come from?

My blog only has about a dozen subscribers, so it's not like I have a dedicated following checking in every day. 90% of my traffic is referrals from other web sites, the majority from reddit. In the graphs below, I broke my traffic down into a few categories of my largest traffic drivers, with news outlets, other blogs, etc. grouped into the "Other" category. The first graph excludes reddit so you can see the early trends. 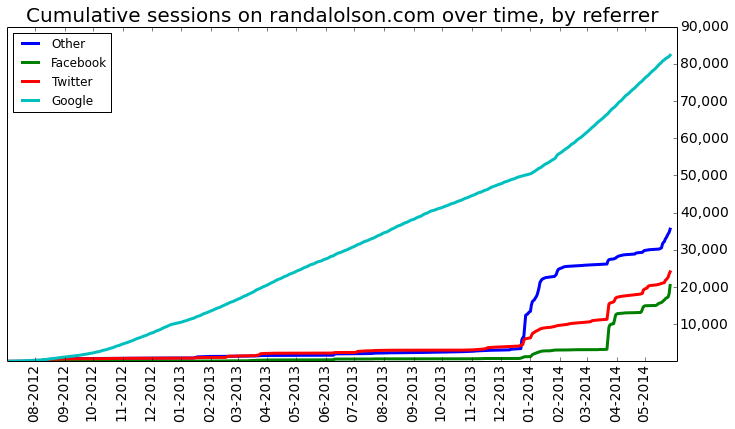 My blog went mostly ignored for the first 5 months, yet for some reason I kept writing and publishing blog posts to an empty audience. I set up a Search Engine Optimization (SEO) widget in September 2012, which had an immediately noticeable effect on my search engine traffic through Google. Search engines have been a reliable source of traffic over the years, so bloggers to take note: If you want to be found, set up SEO on your web site!

Some of my blog posts started getting picked up on various news outlets in late 2013, which led to a bump in the "Other" category. Twitter and Facebook have been a decent source of traffic over the years, but even they've been outpaced by search engine traffic. (And I have a decent-sized Twitter following to tweet to!) And all of them pale in comparison to... 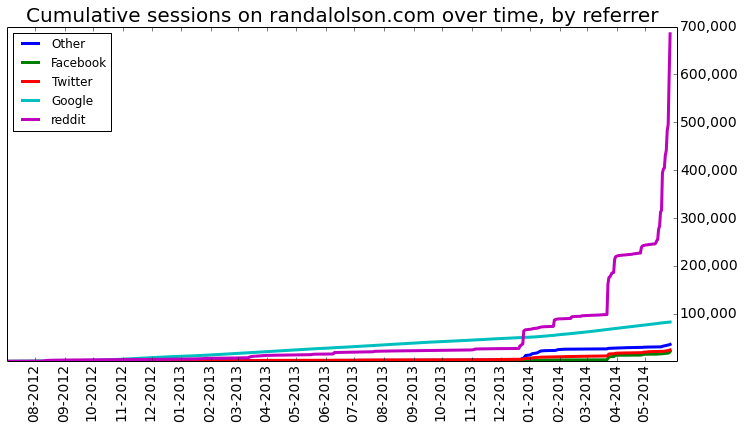 ... reddit. I've been an active redditor for over 3 years now, and I've been posting my blog posts there whenever I found an appropriate subreddit to see if anyone finds them interesting. Ever since I started blogging about my data visualization work, the traffic from reddit has exploded, some days reaching 115,000 pageviews in a single day. Social media folks are always talking about how much traffic Twitter, Facebook, etc. can drive, but my experience has always been that reddit is much better for finding people to share and discuss your work with.

Another phenomenon you'll notice is that spikes in reddit traffic lead to spikes in the other source's traffic shortly thereafter. The spike in reddit traffic in early January was from a couple of my "deadliest movies" blog posts reaching the front page of /r/movies and /r/dataisbeautiful. The day after, news outlets picked up on the posts and started writing about them, and that's when Twitter and Facebook started to pick up on them. reddit seems to be a springboard for new, original content that wouldn't be found without it -- which is why I love reddit so much. (Thanks for giving me a voice, reddit!)

Who reads the blog?

I don't have much information about my blog's readers, but here's what I have.

Half of my blog's visitors are from the USA, leaving the other half to be filled by the rest of the world (mostly Canadians and Europeans). It's been a goal of mine to have at least one visitor from every country, and as you can see, I only have a few countries left to fill. I'm especially proud of the fact that someone from Svalbard (population = 2,642) visited my blog. 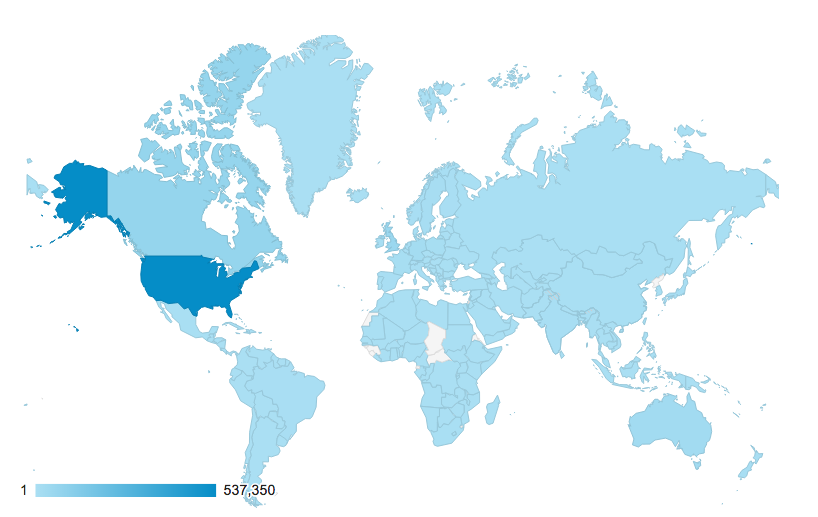 I'm pretty shocked that the USA doesn't show up in the top 10 fastest, given that my blog is hosted in the USA. 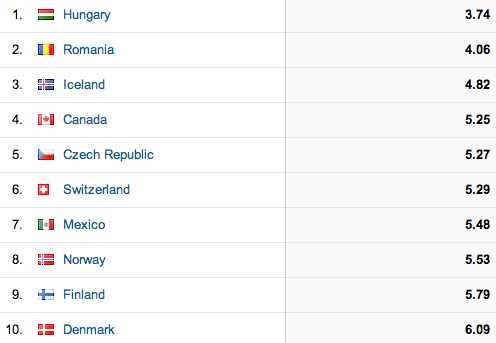 Countries with the fastest internet speeds[/caption] 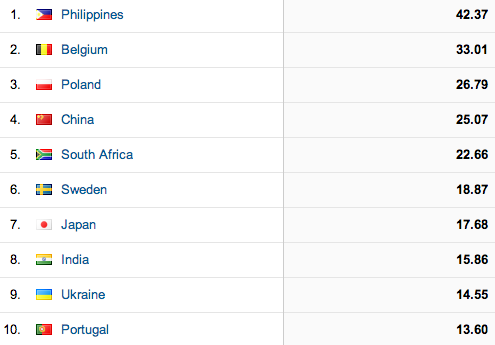 Countries with the slowest internet speeds[/caption]

This analysis would not be complete without a comparison of browser popularity and speeds. You can tell that my blog attracts a more tech-savvy crowd, given that over half of its visitors use Chrome. Despite Chrome's claim to being one of the fastest browsers out there, it's been left in the dust by Safari of all browsers! And poor Internet Explorer still can't keep up with the rest of the modern browsers.

Even though its native browser didn't hold up in the browser race, Windows is still the dominant OS out there. But notice how Apple products are catching up with Windows in terms of market share?

What are the most popular posts?

It's hard to believe that I've published over 60 blog posts over the past 2 years (an average of 2.5/month!). Below is a list of the most popular ones, sorted by pageviews.

Thanks to everyone for your support over the years. Here's to another 2 years!